Digital Iris Is a Labor of Love 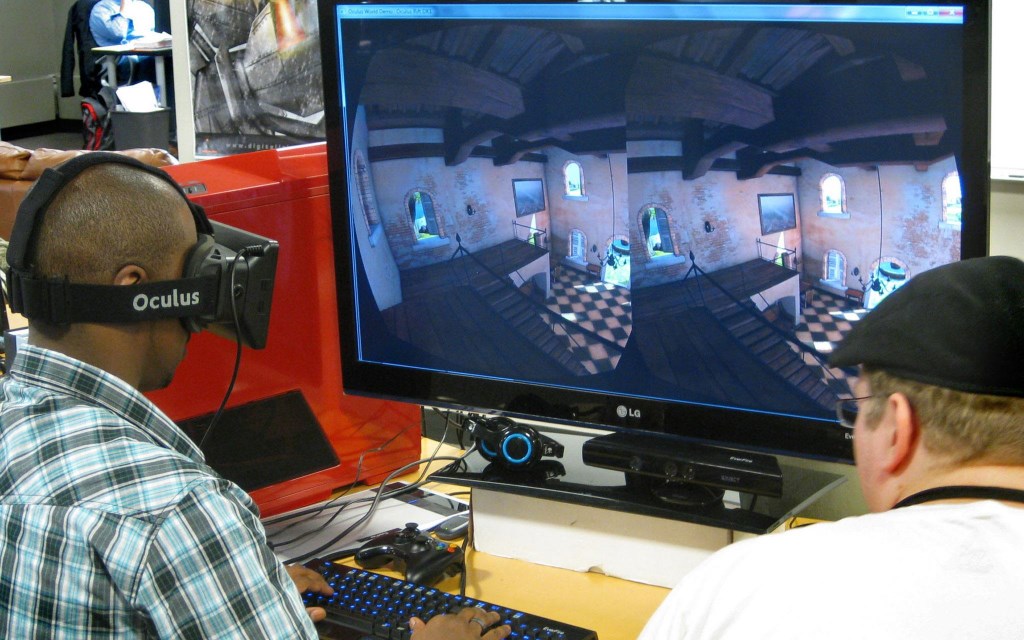 The team at Digital Iris trying out an Oculus Rift VR Development kit. Photo from Facebook.

As his video game development company Digital Iris expands, Swanson is finding himself working late into the night with his team on some of the newest technology in the video game industry. Swanson, who also teaches animation and computer simulation in gaming at Milwaukee Area Technical College, spends most of his nights at the company’s new office in the Castings Point building at 140 S 1st St. in Walker’s Point.

“It’s a labor of love, ya know, so it doesn’t really feel like work,” Swanson says.

Digital Iris has been working on contract for some of the biggest names in the world of augmented-reality and virtual-reality technology, or ARVR. The list includes companies like Oculus Rift and Meta space glasses, for which Digital Iris has done confidential “closed-door” projects.

“I think every five years something big kind of blossoms” in technology Swanson says. “And right now that something big is ARVR.”

It’s been estimated that the ARVR market will be worth about $150 billion by 2020. Swanson predicts 70 or 80 percent of that market will be in augmented reality (AR). This technology allows the user to see through the AR glasses and interact with the altered reality it presents, as opposed to virtual reality technology that creates an entirely new picture of reality. Swanson has made it a mission of his company to bring the latest technology in video game development to Milwaukee.

“We try to stay at the cutting edge,” he says.

Swanson always wanted to work in video games, or at least since the first time he played Commodore 64, which arose in the 1980s as a platform for all kinds of video games.  Swanson says he had to enroll in a “tiny little school in Minneapolis” called The School of Communication Arts, because there weren’t any opportunities to learn the skills he needed to pursue his dream. Some time after that he went to work for Electronic Arts (EA), a video game company.

Even before getting that job, he’d begun creating the the concept for Digital Iris. Swanson and his wife noted the relative simplicity of the animation in the Baby Einstein videos he and his wife would play for their children. “It’s just a toy floating and spinning in the water, but the kids were so excited,” Swanson said, “Then, one day my wife asked me ‘could you make something like that’.”

That question marked the genesis of Digital Iris. The company, founded in 2004, was initially a side-project Swanson worked on when he wasn’t busy with his job at EA. After transferring to EA’s Chicago office in 2006, he was laid off a year later when the company closed the office. Once again, Swanson’s wife pushed him to work on Digital Iris, pointing out that he now had the time now to expand his then side-project.

In the beginning, Digital Iris was mostly working on kid’s games. However, they began to expand their repertoire with contract work on projects like the Honda Dream Drive project. They worked on the prototype for this venture, which was a virtual reality cross-promotional effort between Honda and Oculus Rift. The idea behind the project was giving the passengers of a car something to look at besides what they could see out the window, Swanson explains. Digital Iris was responsible for constructing the virtual world of the prototype.

Digital Iris has started a new project aimed at tackling a problem posed by the development of new ARVR technologies. Each ARVR device that’s made is created with its own specific software development kit, which is a set of programmatic tools used to develop applications and software for digital devices. Swanson and his team at Digital Iris are working on a platform that has a development kit compatible with multiple devices.

“It would operate similarly to how a universal remote works for TV’s,” Swanson says.

One of the big projects being developed at the new Castings Point office is the company’s first video game. Swanson describes the game as a third person “mech-tech” video game, but says he can’t divulge any other details at this time. The new office is part of Digital Iris’s latest expansion. The company moved in a year and a half ago after previously being housed in the Blatz Wash House at 1101 N Market St.

The office is mostly filled with a rectangular configuration of cubicles and decorated with video game posters and memorabilia. It also features a large TV and couches, not uncommon for a company that develops video games. Employees at Digital Iris don’t usually get into the office until after regular business hours, as most work day jobs outside the company.

Swanson believes Milwaukee has tremendous potential to develop more high-tech companies and says the city offers lots of talent for potential employers. Many of his employees are current or former students of Swanson’s at MATC.

Nick Bozarth, the technical art director at Digital Iris, says most of time he works at the office during the night. Bozarth, one of Swanson’s former students, says he lived in Swanson’s classroom while he was at MATC. Swanson calls Bozarth one of his “star students.”

“This is what I love doing,” Bozarth says.

Swanson has surrounded himself with a team as passionate about video games as he is. In fact, passion seems to be what gets them through the long nights at the office.

“My worst day in video games is better than my best day at any other job,” Swanson says.