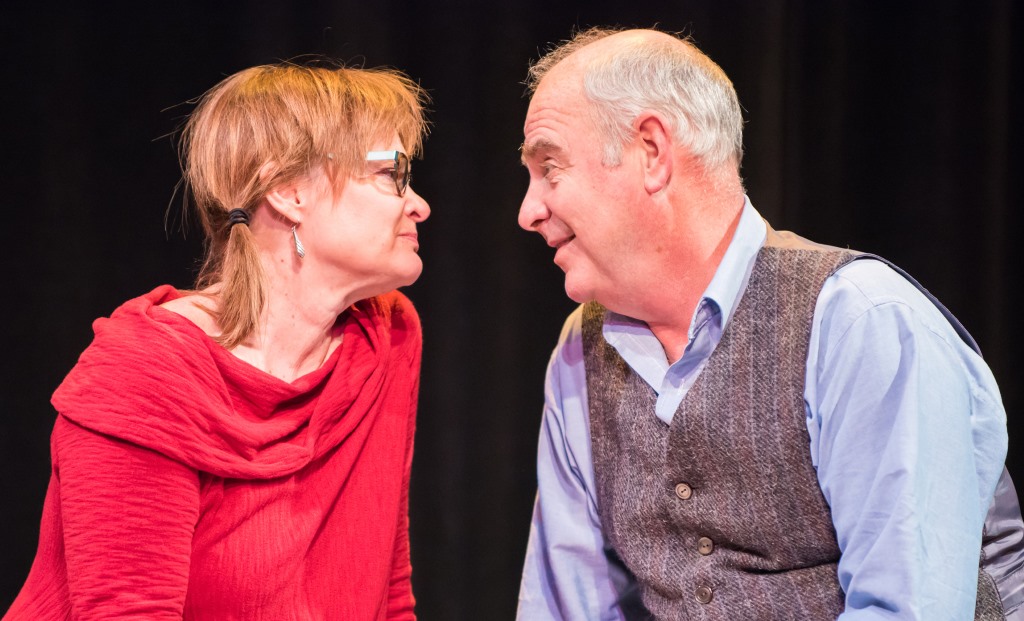 Three one-acts from a normally incompatible trio, George Bernard Shaw, Bertolt Brecht and Dorothy Parker, do share this in common: The one man and one woman genre, roughly the same era (the 1930s) and the theme of marriage. So Madison’s Forward Theater Company put them together 20 years ago using a backstage premise – performed as if in technical rehearsals by a couple of married actors.

Surrounded by portions of sets and ad-libbing stage crew, the actors chat about their own marriage in between and sometimes during the one-acts – all carefully rehearsed to appear unrehearsed – and presto!  You have Love Stories, running through December 20, and perfect for the shoebox-shaped studio theater of the Milwaukee Chamber Theatre. The cohorts in the booth (stage manager Brandy Kline) and onstage (UWM acting interns Robert Knapp and Erika Kirkstein-Zastrow) are joined by a different Milwaukee personality walking through each performance as a soup waiter to add to the sense of “hey gang, we’re putting on a show, so join the fun” while the actors put on different personalities and costumes before our eyes.

If the premise sounds a bit precious and even pretentious, it is. But the curse is dissipated if you have two fine actors who by jiminy are married and relish the naturalism and immense professionalism required. So they not only put on and remove characters while bantering about how late in life, as romances go, they met and married, their mere presence adds a touch of survival wisdom and a smidgen of friendly reality to the interactions.

At least this trio of plays has the right duo of actors. James Pickering’s credentials since the 1970s are immense and legendary in Milwaukee. Tami Workentin’s take-charge comedic timing and pinpoint emotional styling have graced dozens of companies hereabouts. They handle the conceit of the concept warmly while bringing vocal and timing ease and nimbleness to the original pieces, though no one should expect deep revelations in this artifice.

The first one-act, Village Wooing, which traverses from ocean liner to village store, is Shaw indulging his wit rather typically in profound-sounding repartee and inverted sensibilities. It’s about an intellectual travel writer succumbing to the direct assault of a talkative shopkeeper, a diverting illusion of the unlikeliest duo seeing the real other through insults and putdowns. The actors put on British accents and Shavian tone, enjoying the ping-pong as Shaw probably did the writing.

More serious is The Jewish Wife, written by Brecht as almost a soliloquy of sorrow and rage by the wife in Nazi Germany who realizes her Jewishness is injuring her husband’s medical career and changing his attitude toward her while he nobly pretends it doesn’t. Workentin creates startling good character movement here and an intense persona. But director Paula Suozzi’s decision not to recognize and take time for the units of change within full-throated emotional anguish turns the character study Workentin began with into a nonstop diatribe – just when we should be feeling each blow of pain piece by rapid piece. Pickering’s job here quietly conveys a husband who thinks he is standing fast while we know he is deliberately blinding himself.

Here We Are is Parker’s New Yorker smart-set character wit perfectly timed  as newlyweds dance around the subject of sex while revealing the dimensions of squabbling their married life will become. It is the cynical but upbeat conclusion of the event.

The actors more than survive the concept, they make it breeze by. It’s a pleasant breeze if you enter not expecting gales of meaning. 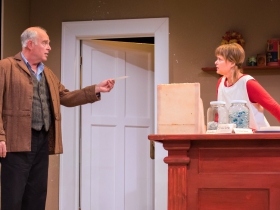 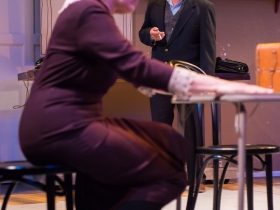 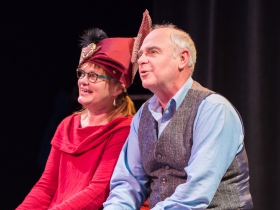