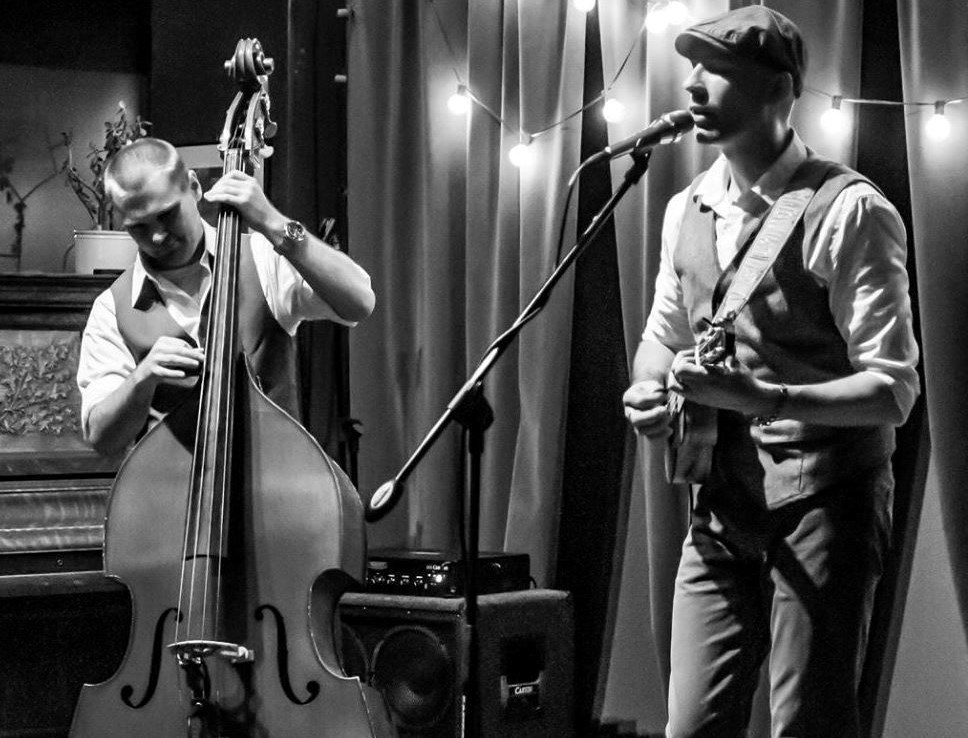 What would happen if Eddie Vedder held Mumford and Sons and Alt-J hostage in a recording studio? The answer might sound something like The Belle Weather. Frontman, guitar and ukulele player Eric Cox and bass player Tom Abromaitis‘ unique sound was borne out of a musical change over the years, as the band moved from driving indie-rock anthems to folksier melodies and instruments. As the band’s members changed (former drummer Stephen Spalding had to quit) the band’s remaining two members swapped their electric instruments for mandolins and upright bases. Still, the group has maintained the energy of their earlier work. Their new album Suitcase is the polished-product of two work-horse musicians who have put considerable craft into the new sound, while still maintaining the soul of their band.

Urban Milwaukee reached out to Cox for a glimpse inside the The Belle Weather.

When and how did you get started?

I came to music late in life. My uncle gave me his beat up old guitar when I was 19. It took about a year before I was confident enough to be on a stage playing, but once I got a few open mic performances under my belt; I was hooked. I haven’t wanted to do anything else since! Tom has been playing music his whole life – both guitar and bass. He’s a really gifted player, and I’m fortunate to get to share a stage with him.

Was there a particular artist that inspired you?

Our influences are pretty diverse. Pearl Jam was my first musical love; I was always drawn to the diverse palette of music they created. Their acoustic tracks set the stage for my love of modern alt-folk music – Glen Hansard, Ray Lamontagne, Brandi Carlile, The Lumineers, Damien Rice, Ryan Adams. Tom and I both love old classic acoustic blues music. We both love the Counting Crows. On long road trips, we nearly always play The Decemberists’ Hazards of Love concept album.Looking back, I was definitely influenced by U2 and Jeff Buckley vocally. Chris Robinson of the Black Crowes, too. They all really know how to cut loose and soar vocally. It gave me permission to sing my heart out. There is so much great music out there, and we try to hear as much of it as possible.

The Belle Weather is a play on the old-English term “bellwether”, which is a ram used to lead the flock. In modern times, the word translates to “a sign of things to come.” The way I split the words also works out to “Beautiful Weather.” All of these things speak to our direction as a group. We have always strived to make big, beautiful music, and to stay true to our own unique sound. I think an audience can always tell when a band has maintained that artistic integrity. If we’re turned on by the music we’re making, and we are, we stand a much better chance of sweeping the audience away with what we’re doing. That’s always the goal!

How old are you?

Old enough to know better, but not old enough to do better. Geez, I turn 37 in December. Tom is just a kid, 24 years young. However, He still stands no chance of keeping up with my energy, and he knows it. I swear I get younger every year, and I’m going to keep doing this as long as I love it as much as I do now.

That’s always a tough question. Indie Alt-Folk Anthem Rock, if I get the “genre” question. I thought about this quite a bit when I wrote our bio, and I think that is a better description: “We are open fields and skyscrapers – equal parts modern folk and indie rock – a fusion of inspired anthems and the art of simple storytelling.”

Have you been influenced by any local musicians/artists?

Absolutely, there is a ton of great music being made in Wisconsin! Two of our favorites are sharing the stage with us for our latest release show at Club Garibaldi Friday November, 21– Ricky Ganiere and Micah Olsan & The Many. We also love the music Lisa Ridgely and The Fainting Room has been making. The Atomic Spins are an old-school, throw down rock n’ roll outfit, they’re great. Devil Met Contention is incredible. We’re also huge fans of The Thriftones. I’m sure I’m missing quite a few more, but these are the first that come to mind. All really great people, too. All of the sounds we hear become part of the sounds we make, consciously and unconsciously. These artists all stay true to their own unique sounds, and that’s always inspiring to see as an artist.

I love telling stories. Our first album was more thematic. It was about big ideas, open roads, love, betrayal, equality and politics. This new album is very personal. It’s about people, places, sights, sounds, and sentiments that I’ve called “home” over the course of the past 15 years. “Roulette” is the most personal of these. It’s a tribute to the Uncle who gave me my first guitar, taught me my first chords, and really sent me down the path on this musical journey. He battled depression and addiction his whole life, and died at the all-too-young age of 45 as a result of these problems. If I have one goal for this album, it’s that “Roulette” inspires someone to help a loved one work toward recovery from addiction. Maybe it’s something as simple as starting that first, difficult conversation. I think people want to be better, sometimes they just don’t know how. My Uncle was a kind soul; he just didn’t know how to unburden himself. I can’t imagine how many times he said the main line in “Roulette” to himself: “I swear, this time will be the last.”

Is there ever any social or political commentary?

Absolutely. We’re engaged in our community and our world, and we’re not afraid to speak our minds. We would love to see a less violent world. We would love to see a world free of the corruption and greed that puts ordinary people in desperate situations. We’re passionate about environmental issues and social issues. We’ve donated quite a bit of our time, music, and money toward the causes we believe in. We’ve never turned down the chance to play a benefit concert, and count those shows as some of the most important we’ve ever played.

What do you think of the local music scene? Is there potential for the music scene to be recognized nationally?

I love the local scene! And yes, I do think it has the potential to be recognized nationally. Often times, it takes just one artist to break through. There is great music being made in Milwaukee and throughout Wisconsin. If the right person or record company bends their ear in our direction, it wouldn’t surprise me if several groups would get picked up to make a real go of it. That’s the big dream: To get to make music all of the time. You can have riches and fame. If I could make just enough to get by and was promised a stage to play on every night for my troubles, I would sign up in a heartbeat.

We’ve probably played every venue in the city. We love Club Garibaldi, and that’s why we booked our latest release show there. They’ve been great to us for quite a few years. We also love playing Art Bar. I think both spaces are great for both the musicians and the listeners. You want to give your fans a great experience when they come out. There are restaurants in the area to eat at before the show, and easy parking. They’re really making a tremendous effort to come out and see us play, so we’re really conscious of where we book these days. Their whole experience is really important to us.

Paradigm Coffee and Music in Sheboygan. Hands down – the best listening room anywhere! It’s our musical home. It also has the best food and desserts around. We’re foodies, so this stuff is important. We also released our first album with a headlining show at The Pabst Theater. Even if I played music for another hundred years and found all of the fame in the world, I can’t imagine playing a space with more grandeur. The chandelier, the architecture, and all of the extraordinary artists who have graced that stage. There is a line in the title track of the new album about this. “On the night of the concert, the theatre lights are burning low, and the sound of the stage is the echo of every song it’s held before.” It was the experience of a lifetime. I’ll never forget it.

We did a proper tour in Spring, 2014. We played Chicago, Louisville, Murfreesboro, Birmingham, two nights in New Orleans, St. Louis, Milwaukee then back to our home stage at Paradigm Coffee and Music in Sheboygan. We had a blast. For the most part though, we’re weekend warriors. I work 60 hours a week and push as hard as possible to play 65-75 shows each year. Every week feels like a tour. We’ll play as often as possible, just for the simple love of playing music.

Do you have any Albums or Ep’s?

We released our debut, “Hold On,” in 2013. We’re about to release our sophomore effort, “Suitcase,” at Club Garibaldi.

Is there anything in the works right now?

We’re also kicking around the idea of releasing a special “Holiday Single” for our fans. It’s pretty ambitious given the time of year and how much time we have to work on things at the moment. But we might just have to make that happen!

As long as we continue to love making music together, we’re going to keep doing this as much as we can. There is nothing that compares to the thrill of leading an audience to one of those special musical moments. Sometimes you can hear a pin drop in the room. Sometimes you lift people up out of their seats. The beauty of it is that it takes everyone involved, musicians and listeners alike. That’s all the inspiration we’ll ever need to play our hearts out night after night.