Then called Wisconsin St., it was a hot spot for photography studios. 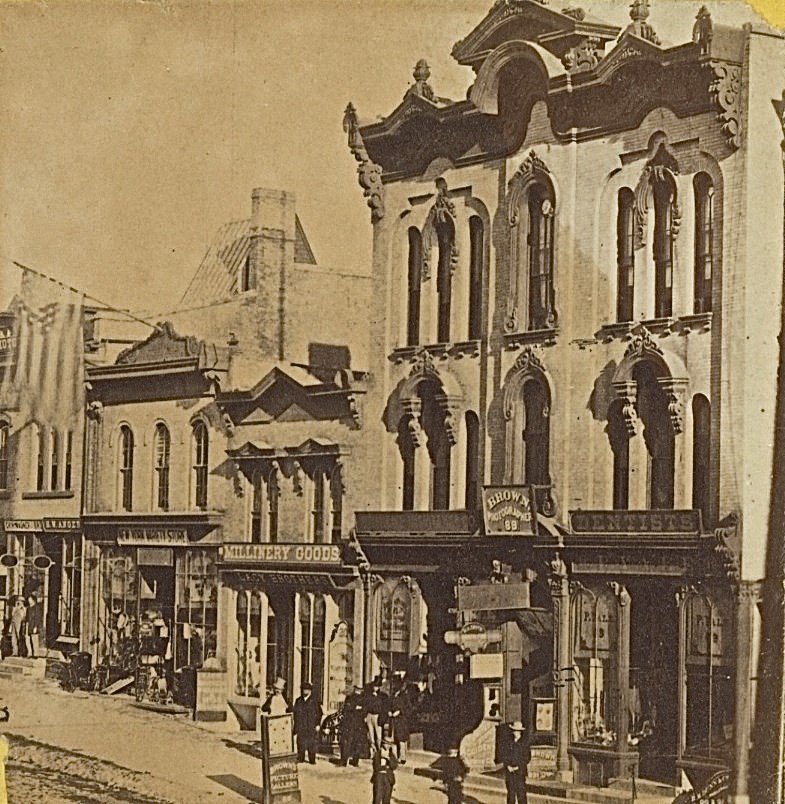 South Side of Wisconsin Ave., 1868. Image courtesy of Jeff Beutner.

Last week we featured an 1867 photo of Broadway and Wisconsin, with the Lydston & Lydston photography studio on the corner.

This is from a stereoview taken by another photographer, circa 1868, of almost the same area but the scene has moved just west and the photographer is facing the south side of Wisconsin St. (now E. Wisconsin Ave.) just to the east of the Lydston building, which is barely visible at the left of this photo. The two smaller building at the center of this photo were also included in last week’s photo.

This view is by Edwin Bangs whose studio was just across the street. It is likely that he shot the photo from a window in his studio. Bangs was described as being “among the prominent artists” and “one of the pioneers of in this business in this city” by the book, Industrial History of Milwaukee (1886), by Elmer Epenetus Barton. We have featured previous photos by Bangs, including his memorable shot of the “Great Storm of 1871,” which left the city piled high with snow drifts.

Another photography studio is included in this image: the tallest building, on the right-hand side of the photo, houses the business owned by Henry Brown, who first appears as a photographer in the Milwaukee city directory of 1858. He is listed at this location from 1866 to 1876 after which it appears that he gave up commercial photography. Little or nothing about him appears in histories of Milwaukee.

At the far left is the small shop of H.W. Anger, who was an optician. He is listed at this location from 1866 to 1869 and he sold stereoviews under his label here. However it appears that he was merely a vendor and not the photographer.  His stereoviews are quite scarce and highly prized. The Milwaukee County Historical Society has an amazing collection of them donated by the Old Settlers Club (which, as it sounds, was a group made up of the early settlers of this city).

As this photo and last’s week’s photo suggest, this area had many photography studios, including those owned by Lydston & Lydston, Bangs and Brown.

One thought on “Yesterday’s Milwaukee: South Side of Wisconsin Ave., 1868”