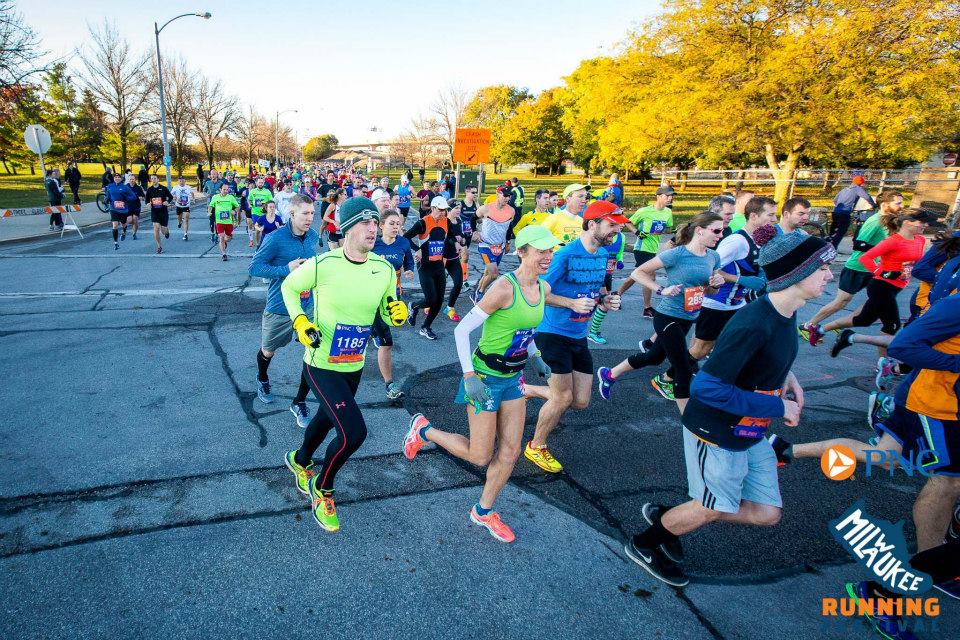 I came home to Milwaukee for the first time in almost two years this past weekend for the Milwaukee Running Festival. It was a treat — a great course through many Milwaukee neighborhoods, and some of the best November weather I’ve experienced anywhere.

After living in Milwaukee for 12 years, and now having been gone for more than 5, I still miss the city and its people, the good friends and civic-minded neighbors we made. I miss my work and the great colleagues I had at Riverwest Currents, MKE, and the Journal Sentinel. I miss the sights, sounds, smells, and activity of Milwaukee.

Even though due to work and other constraints I could only be in town for about 36 hours, the marathon was a perfect way to get my Milwaukee fix–to see a couple of close friends and remind me why I love the city while introducing me to areas I’d never explored. 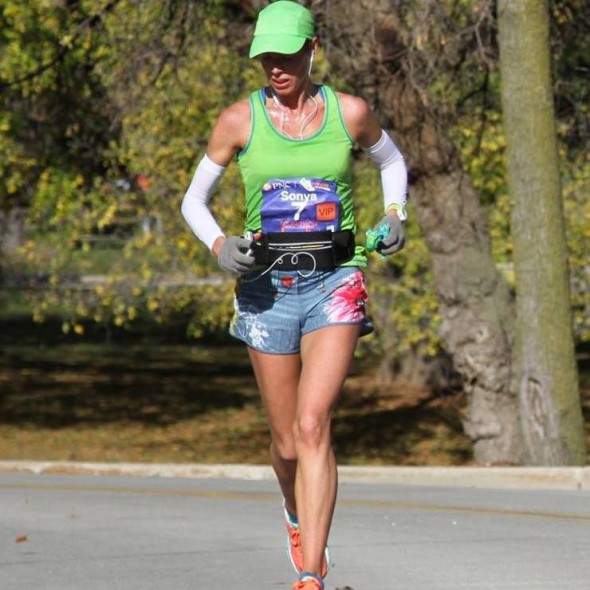 The morning of the race was a perfect 47 degrees with bright sun and a stiff wind. As soon as my brother Jeremy and I, who were running together, walked out of our hotel and looked west down Kilbourn, a street construction sign blocking the south lane blew over with a gust of wind. That didn’t bode well for the westbound portion of the race.

It took about 8 minutes to get from the Hyatt to parking at the Summerfest grounds, and then about half a minute to walk from our parking spot to the race area. Ah, the perks of smaller races.

Thanks to our VIP status (I signed up as a “founder,” which came with the number 7 bib for life, two marathon entries, a stay at a downtown hotel, and VIP perks), we were able to park for free less than a block from the starting line and the VIP tent. Non VIP parking was basically just as close as we were.

I have never had such an easy, low-stress time getting to a marathon start (my points of comparison are Twin Cities, Des Moines, Chicago, and Grandma’s). A world of difference from all the complications we encountered last year when running the Chicago marathon.

The Summerfest grounds were a perfect place for the start and finish — having both in the same spot made end-of-race logistics easy. There were plenty of port-o-pots, but as is usually the case, still not enough. I stood in line from 6:35 to 6:52 for one last try and was starting to get worried I’d miss the 7 a.m. start. Still, it was no worse than any other marathon I’ve run as far as wait time, and probably better than most.

There were plenty of openings to get us into the start area, and no corrals; just markers listing paces so you could line up at the pace you were hoping to hit. Jer and I found the 1:40 pace group for the half (doubled, it would get us to the 3:20-ish marathon we were aiming for at about a 7:40/mile pace) and tucked in behind the others.

When the gun went off, it took us all of 17 seconds to cross the start line, and we were swept along with the half marathoners, who started at the same time. It was nice that the half and full marathon races were run together, because we had plenty of company yet it wasn’t too congested.

After a 7:20 first mile (oops) and 7:19 second mile (oops), we decided the 1:40 pacer ahead of us was pushing it and tried to slow down a little. The first three and a half miles were along Lake Michigan, where the early morning sun glistened off the water to our right. It was storybook beautiful. Spectators were sparse, but there were a few, with cowbells, and the Corgi sign especially cracked us up (“Run like they’re giving away Corgis at the finish line!”)

We turned west on Kenwood toward Milwaukee’s east side just before mile 4. The neighborhood was a bit sleepy, but there were a few hardy souls out to cheer us on (c’mon East Side, you can do better!) then headed down Lake Drive until cutting west on Brady Street, where the 6.5 mile water stop was full of energy and encouragement, thanks to the November Project. Brady Street spectators also turned out pretty well, considering it was just before 8 a.m. when we made our way through there.

And let me just say about the water stops — they were all well staffed when we went through, with volunteers clearly yelling out where the water and where the Nuun was (even though some of the volunteers thought Nuun was Gatorade and called it that). Nuun on the course was a huge plus for me; I took it at almost every stop, and my stomach didn’t have that uggy feeling at the end like it does when I drink most energy drinks.

Around that point, Jer and I were caught by some others who were aiming for 3:20 who had come from Madison and Chicago, and they remarked on how much they liked the course as we made our way toward the marsupial bridge by Trocadero.

Crossing that bridge in the golden morning light, it made me happy to look down at the river and my beloved Lakefront Brewery. Brewers’ Hill and Commerce Street neighborhoods were familiar and full of good memories, and as we cut over to King Drive, the Brewers’ Hill neighborhood had a strong cheering contingent that was a nice pick-me-up. So far, so good!

Running past the old Schlitz Brewery and then down along the river, it hardly felt like we’d been running for an hour, and the day couldn’t have been prettier. I usually prefer cloudy or partly cloudy days, but the sun cast everything in a magical light. It was warming up to about 50, and we were sheltered pretty well from the wind most of the first 8 miles.

We took a right to head west on Wisconsin at the Grand Avenue Mall at mile 8.5 and ran into the wind. It wasn’t fun, but wasn’t as bad as I thought it would be. There weren’t really enough people to draft, so we just resigned ourselves to fighting it until heading north on 35th, where the half marathoners left us to turn south. We got to enjoy the beautiful old mansions of the Concordia neighborhood before a long stretch north. 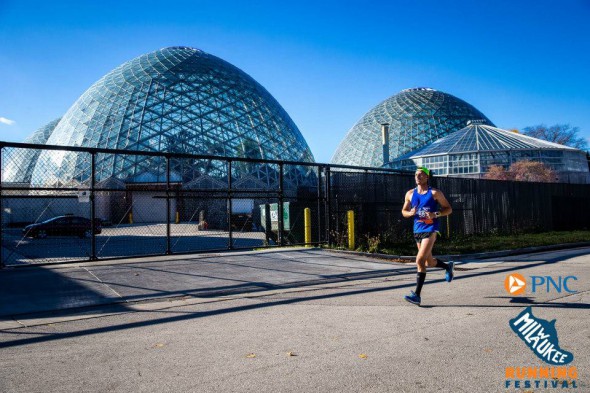 At some point around there we stopped to use port-o-pots. Mercifully, there were four of them available, and two were open, so we only used about half a minute of running time for a quick stop.

We made our way up through Washington Park next. It was just gorgeous, trees in full fall splendor, a few families out cheering, and kids on the playground. But oh those hills and sharp turns! We were to revisit both the hills and turns later after a trip up to Burleigh and back down Sherman Boulevard. We hit the half marathon point on Sherman at 1:40:22, right about on target. Then we were back to Washington Park for the second time around mile 16.

By the way, to the woman on Sherman loudly cheering for every runner who went past by name: You’re the best!

We exited Washington Park and took a sharp turn north up another big hill before heading west down Washington Boulevard. Nice work, Washington Park and Heights neighbors — there were groups of people out on every block, and many of them were making noise and welcoming us to their neighborhood. Some kids in the median were playing football and it was overall a nice, welcoming fall scene. I give them a tie with Brewers’ Hill for best neighborhood support. Although to Brewers’ Hill’s credit, they had to get up more than a whole hour earlier to catch the race.

We headed south on Hawley Road at mile 17 and encountered some more hills, both up and down. There was an especially steep downhill at some point after that where I wasn’t sure what would be more painful — letting go or holding back. A little before mile 18 I let Jer get away from me. My lungs had been feeling off all race, and I wasn’t sure I could keep the pace. I walked part of a steep short uphill as I was hooking up my headphones to get in the zone, and tried to lock in my pace.

The music helped, and the next few miles went by pretty quickly. We passed the Mitchell Park Domes, went around a football field (definitely should’ve had a band there!), and by the Black Girls Run water stop at mile 21.5, I was getting back in the groove again. (For me, the hardest part of a marathon is typically somewhere between 15 and 20.)

Jer was still about 50 meters ahead of me, and I kept him in sight as we followed a bike path along the river. There were a few more hills to deal with on this stretch, and lots of beautiful fall scenes as we ran along the river near tall golden grasses. 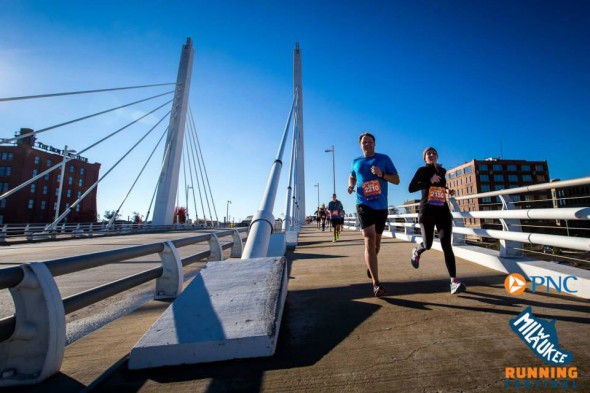 The course took us across beautiful Sixth St. bridge at the 24.5 mile point, and by the time I hit mile 25 I hardly knew where mile 24 had gone. I pulled up to Jeremy for the last mile and tried to egg him on to a personal record, or PR, as the racers say. Stride for stride, we approached the Summerfest grounds from the south and west, with a long arc along the lake before one last right turn under the overpass to the finish.

Ah. It is always SO good to be done. Jer beat me by two hundredths of a second and had a three-second PR. On such a windy, fairly hilly course (Race Director Chris Ponteri described it as 3 out of 5 on a hilliness measure, and I would agree), we were quite happy with our 3:21s.

At the post-race party, I was especially thankful for VIP tent access. We got free massages (really good ones, too), hot chicken soup, and chairs to sit in. It was quite cool out of the sun with the wind, so the heater and tent walls were nice. Not a lot of people who stuck around for the finish line party, probably thanks to a last minute snafu with the liquor license and a lack of beer, but I’m quite certain that won’t be an issue next year.

Kudos to the Milwaukee Running Festival for pulling off a great inaugural race. I’m already planning to come back and run it again next year on Nov. 6. If you’re not planning to run one of the four races that weekend, I’d encourage you to join with friends and neighbors in race-morning cheering parties, giving runners a real Milwaukee welcome!