The Final Miltown Beat Down 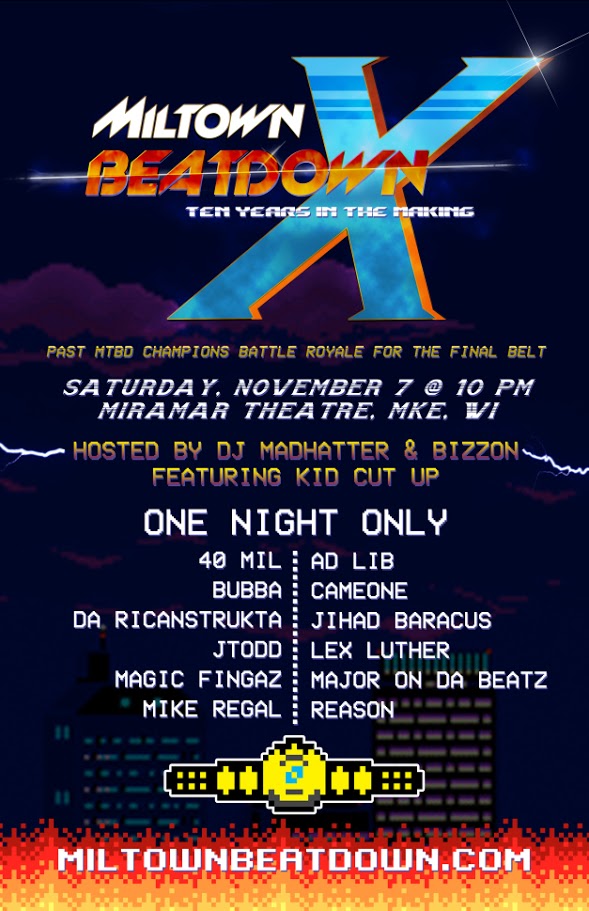 When I lived in Minneapolis I had the privilege of attending the final two Twin Cities Celebration of Hip-Hop events: a weekend-long series of concerts, workshops, discussions, live graffiti art, freestyle rap, dance, breaking, beat boxing, and production battles that took over a block of downtown and occupied the legendary First Avenue concert venue. The annual event brought together artists and community members for a positive experience that took the city’s already flourishing hip-hop scene to greater heights. Though the event ended in the late 2000s the spirit lives on as the Twin Cities hip-hop scene continues to produce grassroots support and compelling artists.

The Milwaukee hip-hop scene is in the midst of its own renaissance, with local, regional and national media outlets all taking notice. One of the many factors fueling this recent boom is the Miltown Beat Down, an annual production battle that is ending its decade long run this Saturday at the Miramar Theatre, featuring a battle royale between past winners. Past judges have included hip-hop luminaries such as ?uestlove, DJ Shadow, Jake One and Masta Ace.

The Beat Down is the brainchild of Jordan Lee, a Kenosha-native and the recently promoted program director at 88Nine Radio Milwaukee. Lee came up in the local hip-hop and DJ scenes, going under the moniker Madhatter. He collaborated with pioneering local rap outfit The Rusty P’s (who will celebrate their 20th Anniversary November 25 at Mad Planet) and co-hosted “The Mad Kids” (with Kid Cut Up) radio show on 91.7 WMSE. Back in April he produced the incomparable Alverno Presents: Jones Uncovered. To help run the Beat Down Lee enlisted the current co-host of WMSE’s Tuesday night hip-hop show (“Those Hip-Hop Guys”), Tyrone “Bizzon” Miller. I spoke to each of them (individually) about the annual event and the state of Milwaukee hip-hop.

How did the Beat Down start?

Lee: The first battle was kind of a ploy for me to improve attendance at my Wednesday night hip-hop weekly that I used to host at The Wicked Hop . Night life can be pretty dead during the winter months, so I was trying to think of a clever way to get people to come out. I kind of came up in the DJ battle scene, so I was familiar with it, and I thought it might be a cool way to get people out and support their friends, and in turn they might promote my event for me. So I started with a rap battle, a DJ battle and a production battle. You couldn’t do a breakdance battle in there because it’s too small. The DJ battle ended up falling apart, but it was the same time that turntablism was on the downturn, so I wasn’t surprised that there weren’t many competitors. The rap battle was okay, but the production battle was really exciting, so I decided to skip everything else after that and just do the production battle. From then on it was producers, producers, producers.

Miller: Jordan wanted to bridge the gap in the Milwaukee hip-hop and DJ scenes where he saw a lot of division. We all like beats, we all like good music, so let’s try to find a common ground.

Lee: I was trying to get the hip-hop scene to unify and understand that some super spacey beats like J-Todd makes are just as good to rap over as hood beats that Magic Fingaz might make. We didn’t have dynamic hip-hop stars like Kendrick Lamar back then. It wasn’t normal to go to these different places and spaces. You have to remember that ten years ago 50 Cent was the biggest rapper and everything he rapped over was pretty much the same shit. There wasn’t a lot of hits that incorporated electronic or jazz or rock elements, but now that’s more common. I feel like we’re creating an environment that embraces those aesthetics. So in some ways the goal of the event has been achieved and I’d like to move forward and let people come up with something else that might solve another problem that faces our creative communities in Milwaukee. 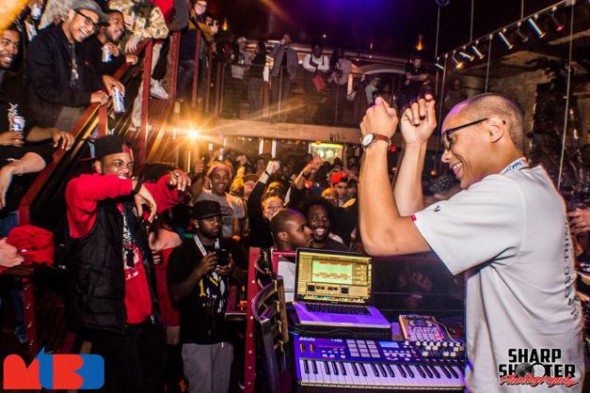 What are your favorite memories from the Beat Battle?

Lee: When Jay-Z‘s DJ Young Guru came as a guest judge he was really complimentary about what was going on in Milwaukee hip-hop. He was one of the first people who gave us a lot of props without being asked. No one said, “So what do you think?” He was just like, “This city has something I haven’t seen in awhile. It’s got a unique sound, which is kind of rare in hip-hop these days, for a city to have its own sound.” That was in 2010 or 2011, well before what’s happening now where we’re starting to get national recognition.

Miller: The new generation of hip-hop artists are really hungry. They are putting so much effort into creating their own lane. They’re not waiting for anyone. There is still a lack of infrastructure in the city. A lot of venues don’t do hip-hop and very few are all ages. The Miramar is an exception. The Milwaukee talent pool and the artistic drive has grown a lot in the last ten years, and there are a few more DIY spaces, but there’s still room for improvement, especially if we want to reach a larger audience.

Jordan, to what extent do your new responsibilities at 88Nine, not to mention your family obligations, have to do with ending the Beat Down?

Lee: My kids are older, my wife is busier. I can’t pretend that it hasn’t been a lot of work. Historically it was a three-month long event and I usually spent three more months putting it together. So it took up half of my year, which is a lot of time and energy. And I don’t make hardly any money from it. Not that it’s ever been financially motivated, but that’s something to put in perspective at this point in my life. But if anyone in the city comes up with an idea like the Beat Down that aims to tackle an issue we face head on I would encourage it. I would support it and I would be there to be a fan of it, I would love that.

The Final Miltown Beat Down – Battle of Champions will take place Saturday November 7 at 10pm in The Miramar Theatre. It is an all ages event. Click here for tickets.