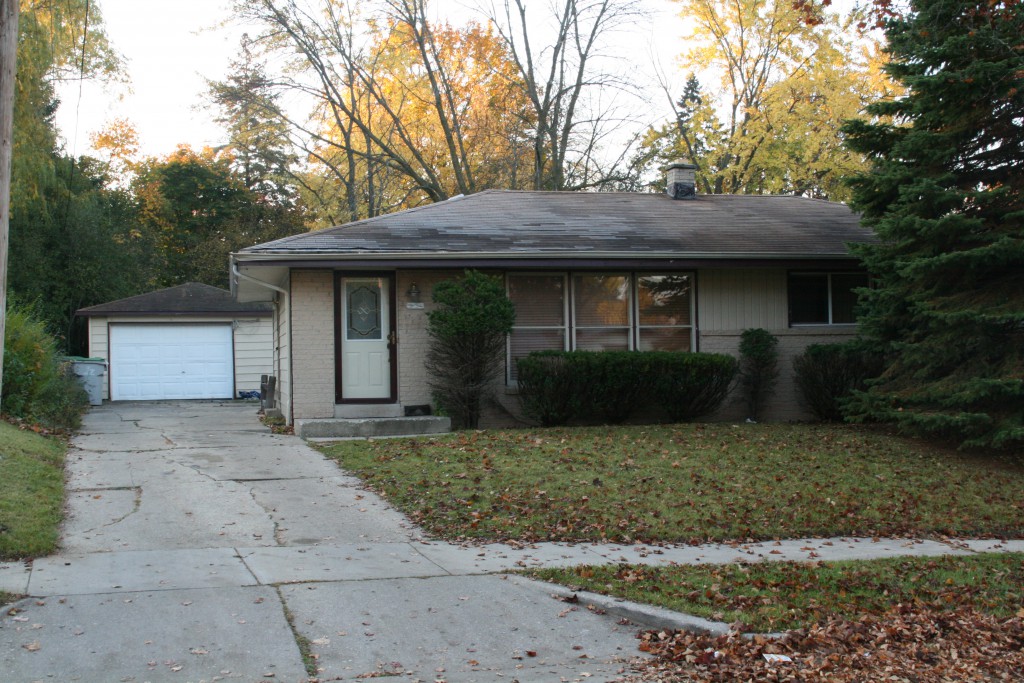 Drug Houses are a problem for many neighborhoods in Milwaukee. Illegal drug activity is one of over 30 nuisance activities listed in the Milwaukee Code of Ordinances. [80-10-2] The Police Department and the Department of Neighborhood Services (DNS) are charged with enforcing the code.

For the DNS, the Property Management Program Coordinator since 2010 has been Regina S. Sims, 45, who was paid $57,512 for her services in that position in 2014. In September, Sims herself was charged with operating a drug house. She is on administrative leave pending a resolution of her case.

According to a news item by Jesse Garza of the Milwaukee Journal Sentinel announcing the charges:

Police also found ammunition, grips and a magazine for a 9mm handgun and a 9mm semiautomatic pistol between the mattress and box spring of Sims’ bed. … Four plastic bags containing $3,600 also were found, according to the complaint.

Sims arrived at her home during the search and denied any knowledge of drugs in her home, even though the place smelled of marijuana, and she should be familiar with signs of drugs and drug dealing like the smell of skunk, safes, digital scales, baggies of cash and a gun stashed beneath your mattress.

Also charged were her son Romero V. Ross, 23, and another man, Timothy J. Rawls, 28. Sims was placed on paid administrative leave by the city, and on September 29th she entered a not guilty plea to the charges. The gun belonged to her son and the drugs are presumed to belong to Rawls, who didn’t want to keep drugs around his house with his kids, according to the criminal complaint.

As Sims awaits her day in court while on bail and paid administrative leave, it’s time for us to take a look at an alleged Milwaukee drug house — hers.

Sims lives in a 1963 ranch home on Milwaukee’s northwest side that was built for Thomas Kinowski by Steve Urbanek builders. This model was a standard one that, with a few variations, was built by the hundreds from the 1950s to early 1970s in Milwaukee and even some surrounding suburbs like Wauwatosa, West Allis, Brown Deer, and Glendale, where you might expect to find such mass-produced, postwar, working-class housing. You can also find similar (if not identical) models in such areas where they might not be expected, including the lesser districts within more upscale areas like Fox Point and Bayside. They are not even unknown in portions of Mequon — practically anywhere that a $12,000 building could be put up on a $4,000 lot during those years.

Newspaper advertisements of the time extolled Parkway Hills as “a Milwaukee subdivision of lasting beauty,” and as “Milwaukee’s most beautiful Northwest Subdivision,” which is very qualified praise.

It was called a “close-in Milwaukee subdivision,” a claim to be taken with a grain of salt, and “a rolling vastness which offers a panoramic view of the beautiful countryside,” which was an outright lie in 1959, and remains so today.

A builder like Urbanek could put these ranch houses up rather quickly. The excavation here was begun on May 7th, 1963, and the foundation approved a week later. Two days later the lumber arrived, and the carpenters got to work. By June 4th, the carpentry and heater were approved by the inspector, with the drywall in place by June 17th.

Despite all this activity, the inspector drove by on June 26th, and decried the “slow progress” of construction. On July 15th, a further inspection revealed the “same” condition. The trim was begun on July 29th, and was near complete by August 22nd, and by September 12th, 1963 the owners were moving in.

Once installed in his new home, Tom Kinowski decided he could use a garage for his automobiles. During those years attached garages were not quite the rage they later became, and this one was built separate from the house. No breezeway for the Kinowskis!

On October 10th, 1963, Kinowski’s contractor, Modernaire Garage Builders, took out a permit for the $900 structure measuring 16’x22′, located just two feet from the lot line and ten feet from the house and neighboring residences. The slab was poured a week later, and by February 5th, 1964 the garage was completed.

The Kinowski family was to spend decades in their three-bedroom, one-and-a-half bath, one-story, Ranch-style home. In 1985, a repair had to be done to the home due to fire damage, and Gerald Lemberg of Lemberg Electric Co. took out a permit for the $100 project.  On December 8th, 1995 Valetta L. Kinowski [1937-2000] sold the home to William J. Wanovich and his then-wife Silke Wanovich for $88,000.

The home was not a happy one for the Wanoviches, who were to divorce in the Spring of 1997, so they put their home up for sale.

A real estate advertisement extolled the virtues of this residence:

This completely updated and immaculate ranch is guaranteed to please the fussiest buyer. Updates include: remodeled kitchen and bath, furnace and central air, carpeting, flooring, roof and siding. Enjoy the private and wooded backyard or relax in the great rec room. A den / 4th br & hobby / craft room finish the tour.

The Hobby and Craft set seemed unimpressed by the residence, for which $92,500 was the asking price. The home remained on the market for over a year, which must have been a testy one for the Wanovich family. Finally, its future as a Drug House was ensured when, with the help of a WHEDA loan, it was sold to Regina S. Sims for $91,000 on December 28th, 1999.

December 28th was also the birthday of Woodrow Wilson, the first president to sign anti-drug legislation as we know it today. The Wilson Administration gave us the Harrsion Narcotics Act of 1914. That act provided “taxation on opiates and cocaine distribution and manufacture which effectively made them illegal.”

Wilson also gave us the Volstead Act of 1920 (Prohibition), which gave us a “ban of alcohol sale, distribution, and consumption from 1920-1933, as well as the Narcotics Drugs Import and Export Act of 1922, which put all sorts of controls and taxes on the importation of opiates and cocaine.

Perhaps Regina Sims should have given the lessons of Woodrow Wilson some thought at her real estate closing.

But the problems facing Sims do not end with her alleged anti-Wilson-isms. In addition to her upcoming felony case for Keeping a Drug House [Scheduling Conference set for November 20th], Sims must also face the sad fact that her treasured home in Parkway Hills has been foreclosed by WHEDA. The confirmation of the sale will take place on January 4th, 2016, and Sims will have to find a new home — one that is not a drug house. The State of Wisconsin Department of Corrections may have a place for her, now that she’s burned her bridges with WHEDA and the District Attorney.

After Sims moved in to her W. Rio St. home in early 2000, the City Assessor took a look around the place. He considered the home to be “overall average.” But he noted some issues. “Dwlg. has deferred maint. Due to pet odor All New carpets after sale. Bath + Kit well kept. Rec Rm. — appear nice when first complete. Now some what neglected.”

Regina Sims, her son and family friend are innocent until proven guilty in a court of law. But there is a positive contribution she can make to the City of Milwaukee — and to her beloved Parkway Hills neighborhood. There is a spruce tree in her front yard that constitutes about 60 percent of the landscaping there, and is really out of place. Looks like something the Kinowskis brought back as a sapling from a fishing trip up north. The tree would have made a lovely candidate to be chopped down and donated as the City / County Christmas Tree. Alas, it is too late for this to be done for this season! After all, if Mayor Tom Barrett can ride around in a vehicle seized in a drug raid, can’t we all enjoy a tree from a drug house?

About the Parkway Hills Neighborhood

From Christopher Hillard in Urban Milwaukee “The Rise of Suburban Style Homes“:

The neighborhood of Parkway Hills, on the city’s far northwest side, [is] the product of those final, frantic years [of the City of Milwaukee’s expansionist era]. Like Wedgewood, this neighborhood and the house [at 9520 W. Rio St., near the Sims residence] … are insular and auto-dependent, bound inextricably to the concrete canal of Highway 135 less than 2,000 feet away.

Urban Milwaukee’s Carl Baehr gives us the surprising story of the naming of W. Rio St. in his authoritative “Milwaukee Streets: The Stories Behind Their Names,” available at every Milwaukee Public Library Branch from Atkinson to Zablocki.

Rio Street got its name in 1958, an era when many streets were named for Wisconsin towns. “Rio,” in this instance referred to a village in Columbia County. The small town near Madison was platted in 1864 and was to have had a Post Office address of “Ohio, Wisconsin.”

But, says Baehr, the Post Office somehow turned “Ohio” into “Rio,” and Rio, it is. This saves a lot of confusion, since there is already an Ohio street in Milwaukee.

Ohio never got a municipal place name in Wisconsin, but other states were luckier, including Maine, Montana, Oregon, Texas, Vermont, Washington and Wyoming. Washington deserves an asterisk, since the eight places bearing that name in Wisconsin predated the western state’s admission to the union in 1889, and really, no place named Washington was named after the state, but rather after the man.

How Milwaukee Is It? The residence is 12.8 miles from City Hall. 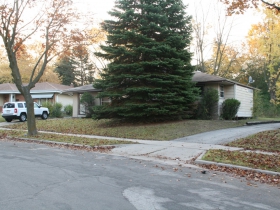 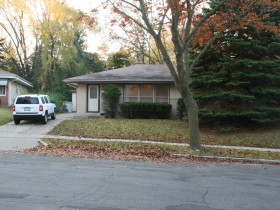 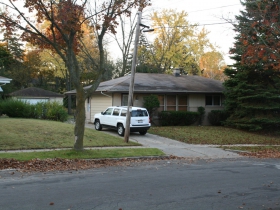 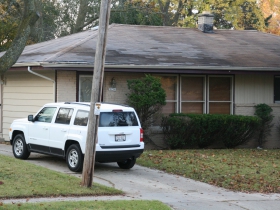 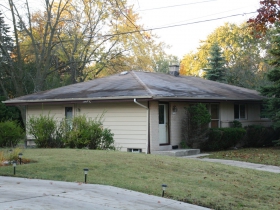 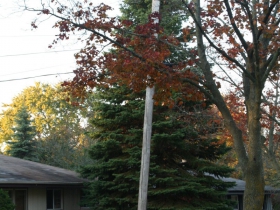