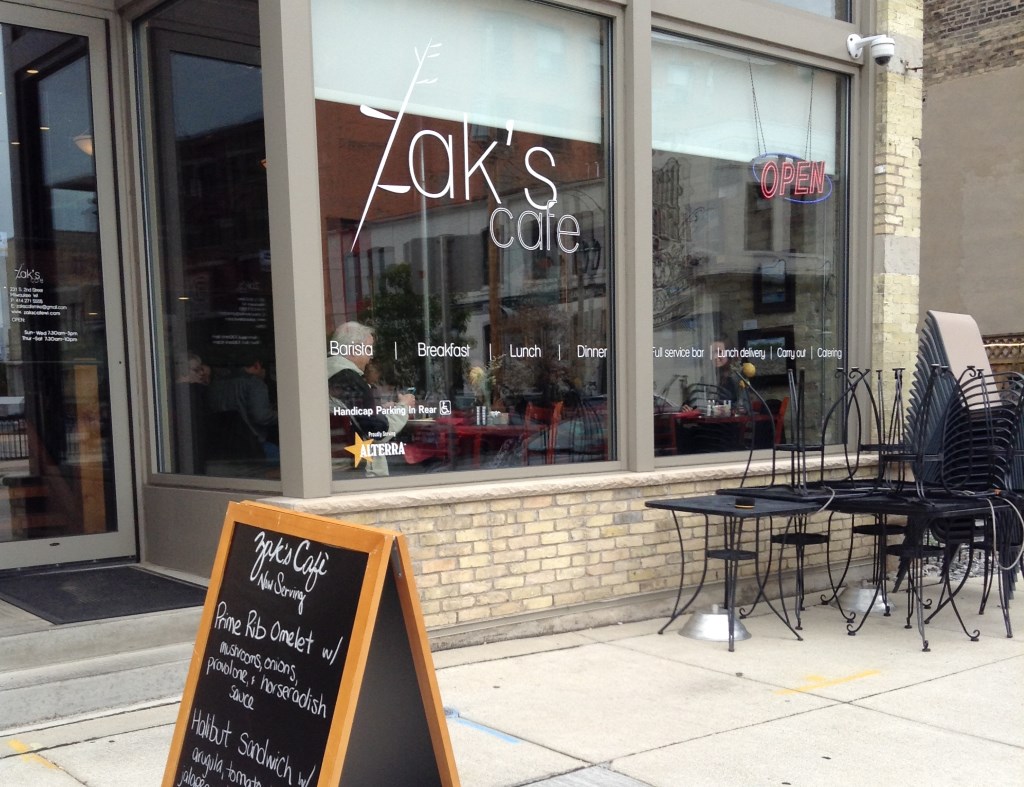 Someone wrote on a chalkboard next to the cashier stand at Zak’s Cafe in Walker’s Point: “Han-gry, a state of anger caused by lack of food. Hunger causing a negative change in an emotional state.”

Hmmm. There’s none of that at Zak’s as we learned at an early breakfast. At 8:00 a.m., after a brisk walk, I’m hungry, and patiently waiting for my meal is not on my agenda. As soon as we put in our orders, the chef got on it. Within five minutes our server delivered a Prime Rib Omelet with mushrooms, onions, provolone, and horseradish sauce to my companion, and my breakfast, Sweet Potato Hash.

The chef had folded small pieces of tender prime rib into the eggs to make the omelet, and to show off the cheese, melted some of it on top. It made a rich, flavor-filled dish complemented by the not-too-spicy horseradish sauce. Horseradish often makes the top of my head hurt, but this sauce held the flavor without the pain.

The hash, a mix of russet and sweet potato, had bacon bits, not enough, but then I’m a bacon freak, tucked among the carbs. A touch of rosemary and a drizzle of Wisconsin maple syrup distinguished the hash from everyday café potatoes. It added up to a hearty breakfast that included two scrambled eggs and two slices of toast. 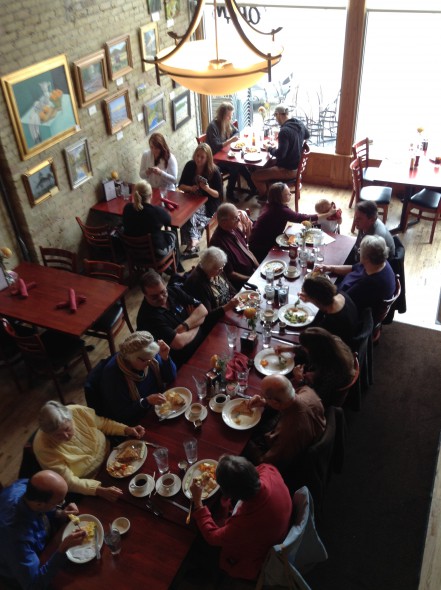 I prefer my scrambled eggs soft, like to know they are scrambled in butter, and tend to judge the quality of breakfast by the scrambled eggs. In my opinion, overly hard scrambled taste like something that sat under a heat lamp too long. At Zak’s, the chef uses only cage-free vegetarian-fed eggs with no hormones, stimulants, or antibiotics, thus I can assume my perfectly scrambled eggs came to me from a happy hen.

The restaurant opened four years ago after owner Doug Konzak gutted the building that formerly housed a bar. He says, “The only things we kept were the Cream City bricks and the rafters. We had to clean those up.” Everything else is new: the oversize front and back windows, the center loft, or “mezzanine” as Konzak describes it, the front and back entrances, and the patio on the north side of the building. “That was an empty lot that needed some cleanup,” Konzak says. That might be an understatement. He took an eyesore and turned it into a charming garden space for his customers.

This is not a small café, yet because the loft/dinning area serves to divide the lower level into two distinct areas, it feels cozy. The wood steps that lead up to the loft, the hardwood floors, wooden tables and chairs — all that wood gives it warmth that belies its size. Paintings hung on the Cream City brick walls, pastoral scenes by a variety of artists, pop against the neutral background. It all adds up to old Milwaukee — salvaged, rehabbed, repurposed — at its best.

Konzak has traveled far from his 40-year career in information technology. He retired from Rockwell Automation after 25 years and wasted no time getting Zak’s up and running. He has no formal culinary training, just a love of cooking. “Many of the recipes came from our home,” he says. “I’m not a chef but I have cooked here a few times.” He has the highest praise for his chef/kitchen manager Efren Pacheco. “He’s incredible.”

When I came to lunch on a Monday, I promised my friends, “No problem. There’s plenty of easy parking.” I lied. And when we got to Zak’s, we knew why: almost every table was occupied.

Cream of Asparagus Soup, the daily special, was creamy as advertised, and slightly crunchy from tiny bits of asparagus. “Oh, this is good,” my friend said after one bite. “It really tastes like asparagus.”

Baked French Onion soup, an authentic version of that classic, had the requisite cheesy crust, a deep rich onion flavor, and plenty of onion in the broth.

Both the House Salad and the Spinach Salad overflowed large bowls. We found the Blue Cheese and the Balsamic dressings tasty but not enough to dress the generous portions of greens. Sure, we could have requested more, but one can only eat so many healthy greens.

On Thursday, Friday and Saturday nights Zak’s serves dinner. There are no small plates here. The Roasted Half Duck, for example, comes with baked sweet potato and bistro vegetables; Zak’s Meatloaf comes with scalloped potates and broccoli; the 8 oz Braised Pork Chop comes with broccolini and garlic mashed potatoes. All the dinner entrees include soup or salad.

On Saturday and Sunday, weekend brunch specials include Chicken Tenders on a Belgian Waffle, Pumpkin Pancakes, and a Monte Cristo Sandwich. To avoid at least a 30-minute wait, weekend brunch reservations are strongly recommended.

What they don’t serve is dessert. They tried offering Purple Door, ice cream from their neighbor down the block. “No one ordered it so the kitchen staff had to eat it,” our server told us with a smile. “Now we send people to get the ice cream themselves.” So I did. What’s a meal without dessert? I enjoyed a small cup of salted caramel, a sweet end to both breakfast and lunch at Zak’s. 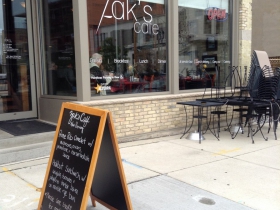 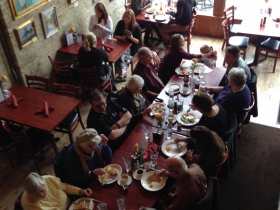 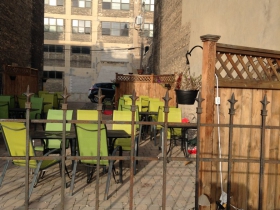 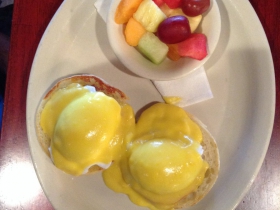 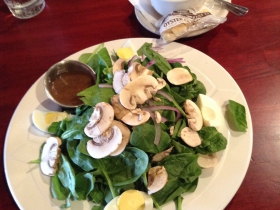 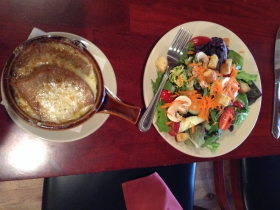 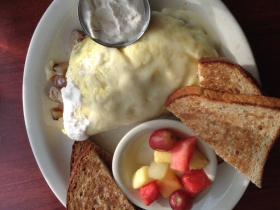 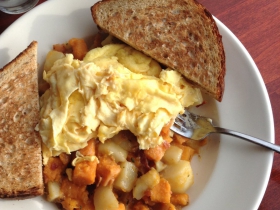