State and county criticized for not addressing high city poverty and black unemployment. 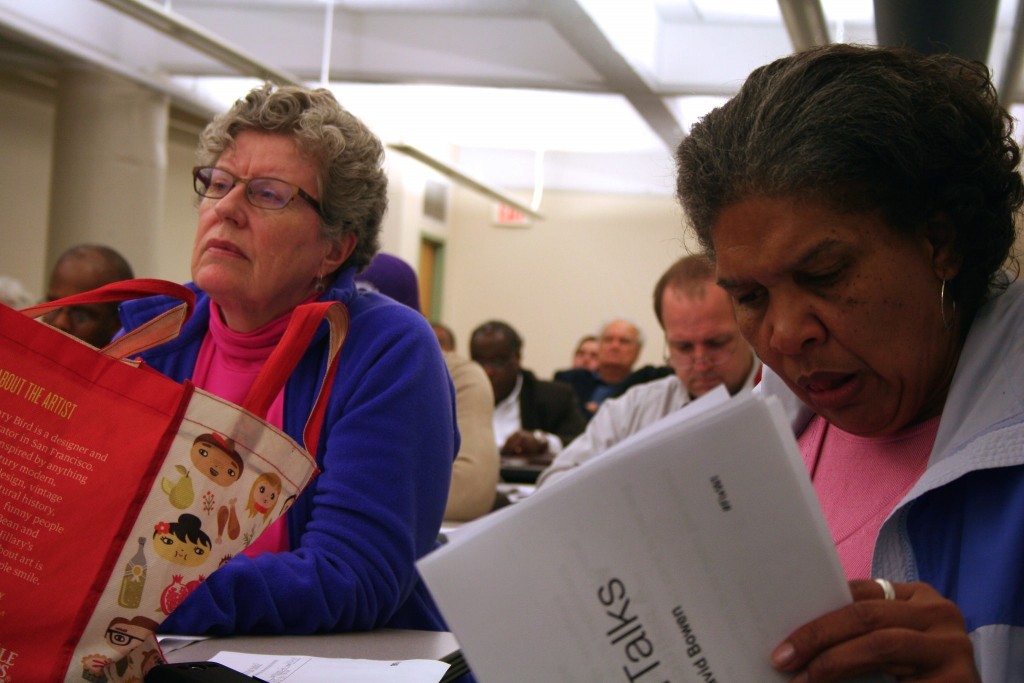 Attendees look on during the event, the first of a monthly series. Photo by Jabril Faraj.

A panel of community leaders at a recent meeting in the 10th Legislative District called for Milwaukee to invest in education, job training and job placement, especially for African-Americans, in an effort to address poverty.

Bowen’s presentation focused on the financial impacts of Gov. Scott Walker’s recent budget, which included $300 million worth in cuts to public education, and the public financing deal for a new Bucks arena, which put the city, county and state on the hook for more than $250 million. Bowen also criticized the governor’s decision to turn down about $350 million in federal funds to expand Wisconsin’s Medicaid program, BadgerCare, saying those funds could have helped to maintain health services and eliminate cuts to tax credits for low-income people.

“We are almost at the bottom in every category, across the board, when it comes to African-Americans in this city,” said Ingram. “It is unacceptable. So, when I hear people talk about building an arena because billionaires want it and there’s a will for people with money to make things happen for other people with money, my response is, ‘For heaven’s sake, whatever happened to humanity?’” 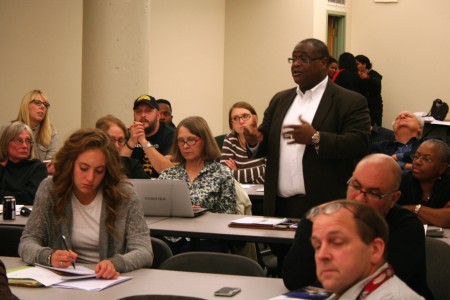 The city’s poverty rate of 29 percent is almost double the national average of 14.8 percent, a number that makes the city the fifth poorest large metro area in the country. The poverty rate among African-Americans is even higher at almost 40 percent. Among children 18 and under, a segment that makes up about 27 percent of Milwaukee’s population, more than 42 percent live in poverty.

A 2012 report by the Social Development Commission (SDC)analyzed 18 neighborhoods identified by the City of Milwaukee Community Block Grants Administration as the city’s most impoverished areas. That analysis showed that while poverty rates were above 60 percent for those with a high school diploma or less, individuals in those areas who have had some college (53 percent) or have gone through an apprentice program (44 percent) also experience high rates of poverty.

In Milwaukee County, 42 percent of all working age, single individuals who filed tax returns had incomes below the poverty line. The SDC report also points out that those who are not in the labor force are even more likely to live in poverty.

Responding to a recent statement by Milwaukee County Executive Chris Abele that his 2016 budget helps the African-American community by increasing funding for social services and the House of Corrections, among other things, Banks said, “I’m a little insulted if that’s his answer.”

“It’s a Band-Aid,” said Banks, who noted more funding is good but added, “it’ll never fix the problem, the disease that is mass poverty.”

Noted Royal, “I’m a firm believer that social services are okay as a safety net,” adding “But, give a man a fish, he’ll eat today; teach a man to fish, he’ll eat for life.”

Royal pointed out that, though the Bucks arena has been billed as a $1 billion investment, the city’s Residents Preference Program (RPP), which mandates developments that receive more than $1 million in direct financial assistance from the city employ 40 percent of unemployed and underemployed workers, was only tied to the stadium itself, which will account for half of the proposed development. Royal questioned Abele’s decision to tout those funding increases instead of pursuing a worker participation requirement for the addition saying, “he doesn’t understand the value of work to an individual that isn’t working.”

As part of the deal, the city and the Bucks have set aside $750,000 for worker training over the next four years. Some have raised concerns about the availability of willing workers. If the Milwaukee Workforce Investment Board determines that all eligible workers have been exhausted, the Bucks can hire any city resident.

Stephen Finn, who lives near 54th Street and Oklahoma Avenue, said he is currently on a construction job that has more than 50 percent minority participation. “The apprenticeship is open to everybody. The apprenticeship ain’t gonna come to your house, drag you out of bed, bite you on the leg and say, ‘Here I am,’” said Finn.

He added, “If you don’t pursue it, I can assure you it won’t pursue you.”

Many in the crowd pointed out that African-Americans are pursuing apprenticeships but simply aren’t being hired. A 2010 UWM report, based on data from the Wisconsin Department of Workforce Development Bureau of Apprenticeship Standards, showed that of 341 Milwaukee-area union contractors only 78 employed African-Americans. That same report said African-American apprentices “suffered higher job losses and were placed on lay-off in disproportionate numbers” and “had a higher rate of unassigned apprentices than any other racial/ethnic group.”

“You can find them constantly not being hired, not being brought on board,” said Ingram of black apprentices. “Now, there’s got to be some reason for that.”

Randy Crump, CEO of Prism Technical Management & Marketing Services, who has been in business for 25 years and is currently helping to ensure the legislated RPP requirement for the new Northwestern Mutual development, said he was “disappointed but not surprised” that the arena legislation did not mirror the Miller Park and convention center projects, which required 25 percent minority worker participation.

“It starts with the legislation,” Crump said. “I will tell you that, frankly, until the owner, the city or a Northwestern Mutual or a Miller Park — the owner — says ‘It’s going to happen,’ it doesn’t happen.”

Recently, a local training program for ex-offenders began a push urging 100 area companies to hire 100 of its graduates in 2016. But Bowen said Milwaukee needs to do more. While he cautioned against believing one particular project, such as the Bucks arena, is going to make everything better he said the city needs to think bigger.

“The current programs that we have are not built to scale, to help everybody that needs that opportunity. We are working on ideas and visions that are too small to address the problems that we have,” he said.

“Our focus needs to be on improving the quality of life of our residents.”

One thought on “Black Leaders Demand Changes to Address Poverty”