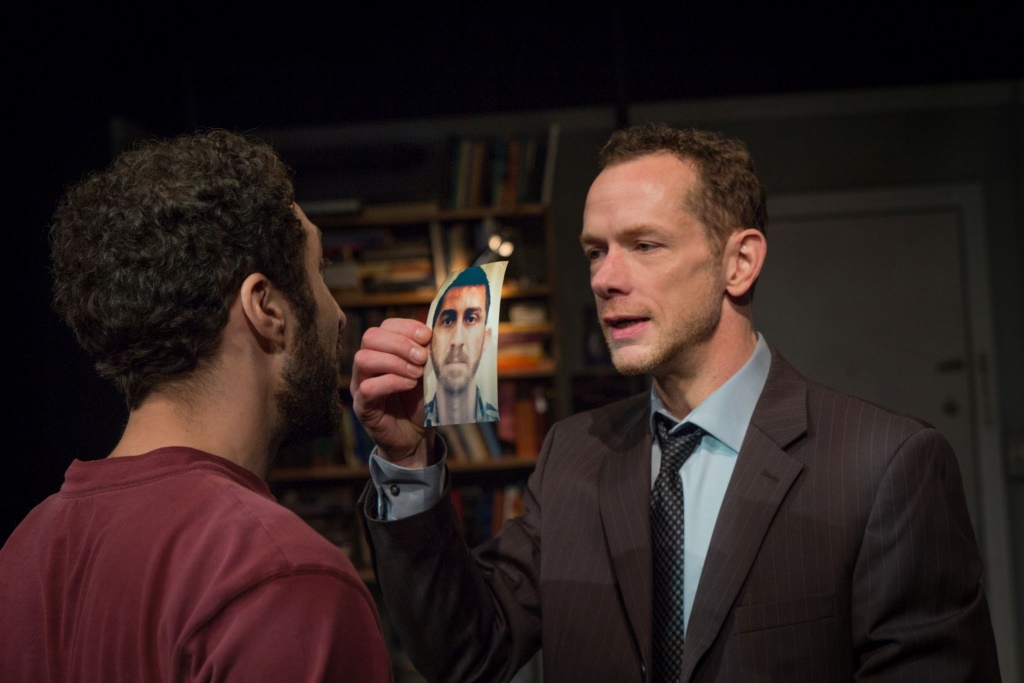 Back of the Throat. Photo by Timothy Moder

Every black and brown minority has a lingering horror of encountering the American justice system. For some that fear dates back 400 years, for others it is of more recent abrasive vintage. It escalated for Arab Americans after 9/11 and seems to have continued apace.

It is doubtful Yussef El Guindi realized how timely his play, Back of the Throat, would remain 10 years after being written and 14 years after the carnage of the World Trade Center. But it is. Both laughter and gasps reflected that audience realization at Next Act Theatre’s production, though the event fictionalized is locked into the 9/11 aftermath.

Basically it is about a writer from the Mideast confronted – at first cordially and then menacingly in his New York apartment — by two government officials and by both vague evidence and living phantasms of their suspicions about his connection to terrorists.

The invaders are building a case against Khaled, played by Christopher Tramantana, out of the history books and Playboys he reads and from what he doesn’t fully say. Their interchangeable good-cop bad-cop routine – with Jonathan Wainwright starting out conversational and Andrew Voss as the prowling menace, only to switch roles at key moments – is a believable parody of the welcoming American way, encouraging him to fill out an official “how are we doing” survey and then manhandling and demeaning him when he insists on his rights.

Even as the events turn surreal it is bizarre how much we recognize the hatred of the foreigner couched in their bureaucratese and tactics.

The 80 minute play is rapid, amusing, fear-inducing and strangely mystic in its ending. It has amusing exchanges of casual bigotry and some creeping, meaningful references, but at a price. Mixed in are some abrupt tone shifts or loose character connectives whether the style be realistic or deliberately surrealistic as the apartment erupts in personas that may or may not be relevant to any investigation.

As good as Tramantana is in conveying bafflement turning to outrage, there are too many sequences repeating this motif that not even precise director Edward Morgan or Tramantana can justify from moment to moment. Mohammad N. ElBsat wanders in as a suspect Arab who may be either satanic or saint, and Alexandra Bonesho conveys several women who represent how overt sexuality will be used to demean and diminish the targeted minority and his private parts.

Actor Wainwright scores points by flipping his pleasant cop into derangement and back again. As his partner, Voss is far more dangerous when he doesn’t talk than when he does.

I once suggested Bonesho may be locking up every sexpot role in local theater, but she’s doing it as a good actress tackling parts head-on. Here her turn as Khaled’s accusatory girl friend is perfectly done – she becomes that recognizable Facebook reject you would never want to have as an eye-witness if you got into trouble. More blatant and largely a waste of the playwright’s time is her appearance as a vindictive stripper, though the story intends the character to underline how white society uses its own hang-ups about sex to create demon enemies. It is another moment when the play veers from the subtle to less convincing exposition.

The play recalls a winning form of social commentary that hit a high point, often behind the Iron Curtain, during the cold war. Playwrights like Václav Havel used a mixture of horror, absurd but believable happenings and outright satire to uncover the workings of oppressive Communist regimes on its citizenry, while film directors like Costa-Gavras did the same with pointed dramatics.

Some folks may be unhappy that Seattle based-playwright El Guindi has conjured out of our vaunted democracy the same vision of an oppressive regime. But the inescapable truth is that this is a dimension that many Arab Americans are made to feel — and are now feeling even more in our social media world. Even deeper, Back of the Throat lays down a subtle hint – that such treatment increases the pull of the old allegiances and beliefs against those so mistrusted because of skin color or place of origin.

So despite construction flaws that dilute the impact of theme and characters, Back of the Throat is not only thoroughly watchable, but important to be watched.

Back of the Throat Gallery 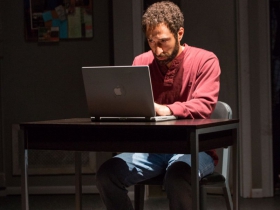 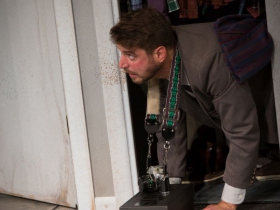 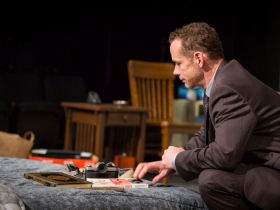 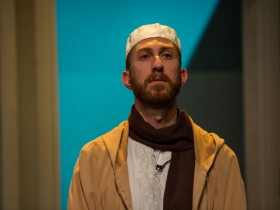 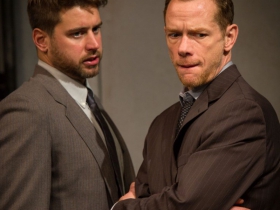 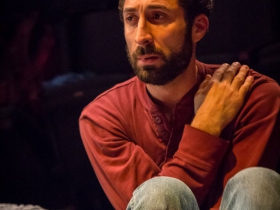