Milwaukee hip-hop artist is angling for the national stage.

Von Alexander has been experimenting with poetry since he was a kid. His wordplay has since taken on a new form, and he hopes his proclivity for rhyme schemes will one day become a career. He has earned a loyal following among Milwaukee hip-hop fans for his smooth and at times blistering delivery. He often tries to bring the listener into his life and mind with songs such as, “Daylight”. He hopes to make the jump to the national stage sometime in the future, and he may be poised to do so. Below is the intro track to Von’s new EP “V O N” released November 19.

How did you get started?

I first got my start with writing poetry. I wrote my first poem in third grade, and the teachers enjoyed it enough to ask me to cite it in front of the other third class. I kept up with it until I reached 6th grade, when I began to actually make raps out of it all. It took until I was 16 to realize it was something I could actually pursue.

When did you get started?

I started recording myself in my cousin’s house, which was just a closet and reasons like any other rapper/artist. While recording for the first time in a pretty good studio, during the summer of 2010, I met Pizzle, a fellow artist who would become my engineer and mentor. He stopped me in the middle of recording and asked me how old I was, because he thought my verse was dope. That was the real moment I thought, “Man, let’s really do this.”

Was there a particular artist that inspired you?

Many different artists influence me at this moment, all of them from different genres too. At the start of it all, I was heavy into Lupe Fiasco, Common and Kanye West; as far as hip-hop goes. Other influences such as, N.E.R.D, Kenna and M.I.A. helped develop my taste in music and just other music inspired me to be the person and artist I am

Where did your name come from back when you went by Vonny del Fresco?

The name Vonny Del Fresco came about during the period of time I was recording at my cousin’s house. Before then, I didn’t really have a name. It’s funny. My name is La Vaughn, and a girl called me Vonny and it just stuck. Del Fresco came from seeing the word “Del” on Del Tha Funky Homosapien‘s name, and I saw “Fresco” on a T-shirt that Shae of N.E.R.D had worn in one of their music videos. It’s really a weird mix of random things taken and placed together.

I would describe my music as my life. It’s the world I observe and my imagination meeting in the middle. There are songs where I get personal about myself, and the struggles I’ve dealt with as a person and artist. I can also be completely in a zone where I don’t care to think about myself, where I would rather speak about things that just make me feel cool. I focus a lot on my technique and how I deliver the words while I’m writing. I enjoy song writing and actually structuring my music. As well as, learning new ways to develop myself and expand beyond what I have I’ve created before.

Have you been influenced by any local musicians/artists?

I’m influenced by so many artists that we have in this city. It can be their music, the conversations I’m able to have with them or just how everyone moves when it comes to their accomplishments. Everyone here is their own artist. 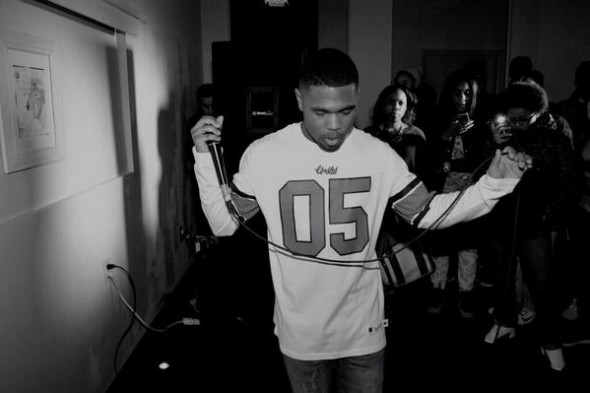 Influences from the national/international scene?

A lot of artists from Toronto have my ears at the moment from the producers to the rappers and singers, they’re blossoming pretty nicely right now.

Like stated before, my life, my observations of the world surrounding me and my imagination really make up what I decide to write and speak on. I try my best to give great lyrical content, in everything I do. I want others to not enjoy the wordplay but really catch the content in that. One thing I often do is separate my verse from my hooks, I want my verse to have you in one place as to where the hook leads you into a deeper state to where it’s almost it’s own world. “Daylight” being an example of that.

Is there ever any social or political commentary?

I am currently speaking up on certain issues that may bother me or that I just pay attention to myself. Such as, the North Side of Milwaukee, and just how I feel being surrounded by a lot of what’s going on here in the city. In my recent release “Memoirs” I try to touch on the importance of being apart of the youth, and how we are the true diamonds of this earth. We are easily distracted by so much, but have so many big dreams. We struggle just trying to own, shape and learn to use our potential. So we can excel in this lifetime at the ages we all are.

What do you think of the local music scene? Is there potential for the music scene to be recognized nationally?

The music scene in Milwaukee is starting to show rapid growth, from just about everyone who’s putting themselves on display. Many are already beginning gain that national exposure that we need, we just have to continue on the path we are on and support one another like we’ve been doing. We still struggle with getting attention here at home, but that will come once everyone else notices what’s going on here.

I haven’t really had a specific place that I’ve played too often. I’ve played in so many different places and have been able to gain the opportunity to showcase myself on different platforms in the city. I’m grateful to be able to do that.

So far my favorite place that I have performed has to be Hotel Foster, every time I’m there it’s just been pure energy and a great time with the people who have happened to pop up to the events that had taken place there.

Haven’t actually toured just yet, plans for 2016 for sure.

Do you have any Albums or Ep’s?

I have an EP that was recorded a year ago entitled “After The Fall” which will be available for download via Audiomack very soon as a thank you to people who’ve supported me so far.’Memoirs’ an album that I released in May this year, can currently be streamed on my Soundcloud.

Is there an Album/EP coming out soon?

Currently working on some things for 2016 I plan on having a great year musically.

Plans for the future, are to travel and open more doors of opportunity for myself as well as the Milwaukee music scene. Just really focused on making sure the presentation is perfect and the right moves are made to do so.