Event attendees celebrate "Miller Time" with a lager from 1855. 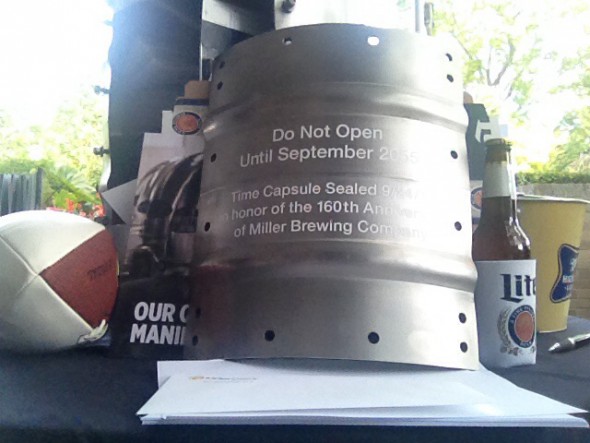 “Ladies and Gentlemen, it’s Miller Time,” Dr. David Ryder announced to a crowd filled with MillerCoors employees and local dignitaries. Everyone cheers and raises their glass, filled with a special 1855 MillerCoors Lager, in a toast to MillerCoors’ 160th anniversary.

Miller Brewing was started 160 years ago by Frederick J. Miller when he came to the United States from Germany with $9,000 in gold and packets of yeast that are still used today in the brewing process. Miller purchased an old brewery from relatives of the Pabst brewers that was no longer in use and refurbished the equipment. He started off using barley and hops that he purchased from farmers in the area. After the success of Miller High Life in 1903, MillerCoors expanded from a regional brewer to a nearly nationwide brewer. After the success of Miller Lite in 1975, the company went from seventh place nationally to second place.

MillerCoors employees gathered outside of the MillerCoors Milwaukee office to celebrate the company’s 160 years of existence. Beer brats and hot dogs were available, as well as MillerCoors anniversary themed cupcakes, served from a cupcake truck. Employees washed their food down with an original 1855 MillerCoors Lager, available exclusively at the event, while they waited for the speech to begin.

Kelly Grebe, Chief Legal and Corporate Services Officer for MillerCoors, kicked off the event with an introduction.

Grebe then proceeded to introduce John Gurda to the stand, a Milwaukee author and historian. Gurda gave a brief history of Frederick J. Miller and the MillerCoors company.

“I’ve studied most of Milwaukee’s brewers over the years, and if I could go back and have a beer with one of them, it would be Frederick J.”, Gurda says.

Mayor Tom Barrett was called to the stand next.

“To show how polite I am, I finished my beer before,” Barrett says, which elicited laughter from the audience.

Barrett talked about how proud he is to have two worldwide iconic companies (MillerCoors and Harley Davidson) right next to each other in the heart of Milwaukee. He also talked about how beneficial to the city the two companies are in terms of providing an extensive amount of jobs.

The last person to speak is Dr. David Ryder, Vice President of Brewing and Research for MillerCoors. He discussed about how MillerCoors has always stood for quality, which is evident in the company using the same yeast for 160 years for every batch of beer they make. He then went on to talk about the special beer that everyone attending the event is drinking.

“You’ll have to be careful about this beer because judging from Mayor Barrett’s glass, it does evaporate very quickly,” Ryder says.

Unique to the anniversary celebration was a time capsule in the form of an empty half barrel of beer. Employees were encouraged to put items and letters into the barrel. Along with items and letters from the employees was a football signed by Aaron Rodgers. The time capsule will be opened 40 years later for the MillerCoors 200th anniversary celebration.

“Given the longevity that we have with employees of the company, there actually will be some here today, that will be here in 40 years,” Grebe says.

“Maybe for the 300th anniversary we can get a full barrel,” Abele said.

One thought on “MillerCoors Celebrates 160 Years”