Hillary Clinton brought her campaign to Milwaukee Thursday, September 10th, for her first of what will likely be many visits to the Badger State over the next 14 months.

Originally planned as an outdoor event to be held at the UWM Spaights Plaza, the appearance by the Democratic party presidential hopeful was moved indoors to the 750 person capacity Student Union Wisconsin Room. Attendees were screened by Secret Service and other law enforcement personnel prior to admission. The 10,000 square foot room was full well before the candidate began her remarks shortly after 6 p.m.

An overflow crowd of about 250 — not all of them Clinton supporters — gathered in the atrium of the massive Brutalist concrete structure built in 1973, watching the event on a large television screen, and listening to it from two small speakers that flanked the screen.

The speakers, and the building’s hard acoustics, were no match at times for the immature rantings of a rowdy peanut gallery, led by a red-shirted loudmouth, perched on a second floor landing. A pencilled sign (what, there were no crayons?) said that they represented the “Rand Paul Revolution.” I doubt Dr. Paul would endorse their support, what with their antics.

Other, more orderly protesters appeared, including some with signs riffing on the Hillary logo. The “H” is for hypocrisy, they said. Another held aloft a sign asking if Hillary had received his e-mail, a reference to her fabled private e-mail account when she was Secretary of State. Yet another individual quietly held up a sign showing his support for Bernie Sanders, the Vermont Socialist who is challenging Clinton for the Democratic nomination. I did not see any Scott Walker signs. One white-haired gentleman walked around wearing a sandwich board demanding an end to the war on drugs. He was a popular photographic subject.

But for the most part the audience consisted of student supporters of Clinton. Some of them are just on their first few days of university life and have already seen first hand a woman whose place in history is already assured, even if she does not become president.

[This writer recalls a 1968 visit to UWM by Robert Kennedy.]

The visit was sponsored by “Women for Hillary,” and a number of participants went home with signs affirming their support of the candidate. These will be appearing in East Side windows shortly.

Clinton stated her belief that “women should be able to raise their children” without fear of the violence that has swept far too many communities, she said, “including Milwaukee.”

She called for a “real solution to ending gun violence,” while admitting that her stance is “not politically expedient.” This statement appears to signal a showdown with the NRA if she becomes president.

However, the greatest applause came from a quick and concise catalogue of what she considers to be the failings of Scott Walker, the Wisconsin governor who is running for the Republican presidential nod.

“It seems to me just observing him, that Gov. Walker thinks because he busts unions, starves universities, guts public education, demeans women, scapegoats teachers, nurses and firefighters. He’s some kind of tough guy on his motorcycle. A real leader. Well, that is not leadership,” she said. 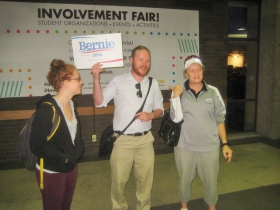 A full house gathered at Linneman’s Riverwest Inn, 1001 E. Locust St. Wednesday, September 9th for a concert in memory of Art Elkon, who died of cancer on August 17th at the age of 58.

The event was organized by Peter Roller, who said that Art himself had left behind a little money for just such a reason. Guests were treated to corned beef sandwiches, sushi from Izumi’s and a huge bag of M&M candies. Roller said all of the artists that Art wanted to perform at the event made it, with the sad exception of the incomparable Robin Pluer who had to cancel due to a broken wrist.

Elkon bridged the worlds of music and art. For years he haunted the gallery openings of the city photographing the passing scene, very often at the Portrait Society in the Marshall Building, sharing them on his Facebook account. He also photographed many band concerts, and some of those photographs hung on the wall of the tavern during the show, while their subjects performed on stage in a moving tribute.

The tribute to the Fox Point native began with a poem by Harvey Taylor, who called him a “smiling man with a camera,” which pretty much sums up the Art Elkon experience.

Roller said participants would be welcome to share their experiences with Art later in the program, but cautioned, “let’s not turn this into an Irish wake.”

With that, it was time for Paul Cebar to take the stage, later joined in a touching duet with Roller. Cebar had played at Elkon’s bedside during his final days in hospice care. If your lot is to listen to the celestial choir for all eternity, there can be no better opening act than Paul Cebar.

The event was included in the Linneman’s calendar under the heading “Art Elkorn Memorial.” Art would have got a kick out of that. 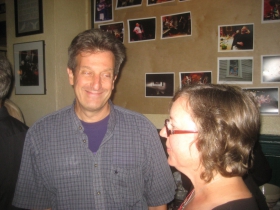 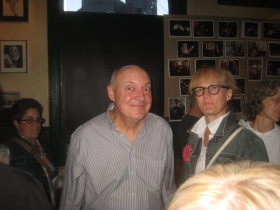 2 thoughts on “Plenty of Horne: Hillary Clinton Comes to Town”