Asian restaurant along the river will add more customers to the throng packing the water side. 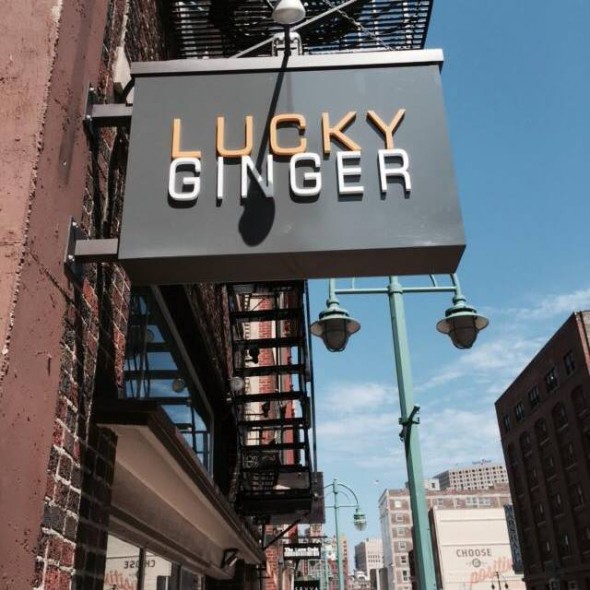 It was back in March that we let readers know about a mystery restaurant that was said to be opening next to Rustico Pizzeria on Water Street. We guessed Asian and soon learned the restaurant would feature “traditional Asian cuisine with a contemporary element” as the Historic Third Ward Association described Lucky Ginger.

It took awhile to complete the preparations, but the riverside restaurant finally made its debut on August 19th. Co-owner Souk Sayavongsa told Carol Deptolla of the Milwaukee Journal Sentinel that the restaurant is currently in its soft opening, serving lunch and dinner as it adds dishes to the menu. It won’t have its grand opening until after Labor Day.

You can visit the 80-seat restaurant at 221 N. Water St. (formerly the space of a café known as Cynthia’s) to enjoy a pho with meatball, brisket and flank steak ($11), pad Thai with chicken, vegetable, beef or shrimp ($10 to $12) and many noodle and rice dishes. A variety of cocktails prepared by bar manager Marr’Lo Prada will include strawberry-basil lemonade ($10) and a jungle bird ($10), rum with Campari, lime juice, sugar and pineapple juice.

And, of course, there’s also a lovely view of the Milwaukee River at the back of the dining room, which should add to the throng of suburbanites and tourists and city dwellers crowding to bars and restaurants along the river.

The kitchen at Lucky Ginger is open Tuesday to Sunday from 11 a.m. to 10 p.m. while the bar is open until 11 p.m., making it perfect for those late-night excursions. The restaurant currently does not offer reservations, but you can still order takeout. You can check out updates as well as pictures of entrees on the restaurant’s Facebook page.

As the independently-owned Indian restaurant Maharaja approaches its 18th anniversary, President and CEO Balbir Singh and his family are looking to make some changes.

According to OnMilwaukee, the popular restaurant is adding new items to the menu inspired by both Northern and Southern Indian dishes. New dinner options include tandoori lamb chops ($20) and South Indian style Kerala coconut milk curry with red chilies and a choice of chicken, lamb, fish or shrimp ($14-$17). There will also be half-price wine on Tuesdays nights and $5 premium martinis on Thursdays.

Maharaja will also make significant changes to its lunch menu. Starting Sept. 8th, the restaurant will offer a special three-course lunch menu for $14, a two-course menu for $13 and a two-course vegetarian menu for $12. All options will include a choice of basmati rice or naan. The new lunch menu will replace the popular weekday buffet.

Lovers of the buffet need not despair, however, because the restaurant will continue to offer its grand buffet on Saturdays and Sundays in the form of a new weekend brunch buffet starting Sept. 12th. The buffet will feature over 40 different options, including Hyderabadi Chicken Biryani, a dish that’s not found anywhere else in Milwaukee that is prepared by layering seasoned rice and chicken. The buffet is $18 per person and $8.50 for children and includes both alcoholic and non-alcoholic drinks.

Chicago is about to hold a Mecca for oyster-lovers around the USA, and it’s getting a bit of help from Milwaukee.

According to OnMilwaukee, Harbor House, a Milwaukee seafood restaurant located on 550 N. Harbor Dr. and the largest oyster purveyor in Wisconsin, will be participating at the 27th Annual Oyster Fest Chicago.

In addition to oysters, the fest will also feature live music from bands such as headliners St. Lucia. You can also enjoy your oysters with craft beer from breweries around the USA (but none from Wisconsin, sadly). And the Oyster Slurp-off at 6pm sounds like a must-see — or is it must hear? — event.

It’s great to hear one of Milwaukee’s own making a splash at such a big event. If you have time for a drive and you have an affinity for oysters, you can take the plunge on Friday, Sept. 11th from 3 p.m. to 10 p.m. at 21 E Hubbard St., Chicago, Illinois in front of Shaw’s Crab House. You can order your tickets on the fest’s website; admission is $30.

The North Avenue bar scene is getting a new addition in the form of The Winchester. Business partners Jay Stamates and Steve Gilbertson will open the bar and restaurant at 2321 N. Murray Ave., the former location of Two Bucks.

The atmosphere of The Winchester will appeal primarily to college students. It will feature sing-a-long-friendly country and rock music along with sharable and mobile food dishes developed by Chef Frank Harroun from Lucky Joe’s Alchemy & Eatery. It will also offer brunch every weekend and a service industry brunch on Mondays. Even the name of the bar and restaurant appeals to the college crowd; it comes from Shaun of The Dead, which Gilbertson says he has seen with roommates “easily 100 times.”

“A lot of college kids from smaller cities have that one bar at home where they meet up with their friends when they come back for breaks and holidays,” Gilbertson told Molly Snyder of OnMilwaukee. “We want to give them something like that on North Avenue.”

The bar and restaurant hopes to open this Friday, Sept. 4th.

Good news for Milwaukeeans hoping to get their karaoke on. Shannon and Gina Stangel, owners of The Mason Jar on 645 N. James Lovell St., told Snyder that they are renaming the establishment to The High Note Karaoke Lounge and are reintroducing karaoke to the spot.

The Stangels bought the bar, which used to be called The New Yorker, in the hopes of converting it into a live music bar. But after patrons clamored for the return of the karaoke that they enjoyed at The New Yorker, the two decided to bring it back.

“Karaoke is always free,” Shannon told Snyder. “We have added a lot of lasers, smoke machines and lighting. It is above and beyond a standard karaoke show.”

Shannon added that they are currently doing some renovations to the place. But if all goes well, you can start singing your heart out at the High Note Karaoke Lounge this Friday, Sept. 4th. Karaoke will be offered Wednesday through Saturday nights with Monday and Tuesday nights being considered for the future.

And for those of you who hate karaoke… well, you could try earplugs.

Due to the death of owner Natalie Soref in June, NSB Bar and Grill will close on Sept. 5th after 20 years of service, according to the Milwaukee Journal Sentinel.

The restaurant, located at 8649 N. Port Washington Road in Fox Point, was known as North Shore Bistro until 2010. That year, the restaurant was remodeled to appeal more to the casual crowd during the economic downturn. Its sunken patio became a popular spot for summer outings as patrons dined on items such as gargantuan ice cream drinks made for four people.

Soref was a philanthropist and worked with co-owner Elias Chedid for 25 years. The two travelled to restaurants around the country to get ideas for their own restaurants. Soref also owned The Knick on 1030 E. Juneau Ave. and Harry’s Bar and Grill on 3549 N. Oakland Ave in Shorewood. She sold both restaurants to Chedid and they will still remain open.

“We still enjoy the loyalty of our guests,” Chedid told Deptolla, “but everything comes to an end.”