City Clerk’s Home Is His Castle

Jim Owczarski's home towers over the nearby ranch homes. 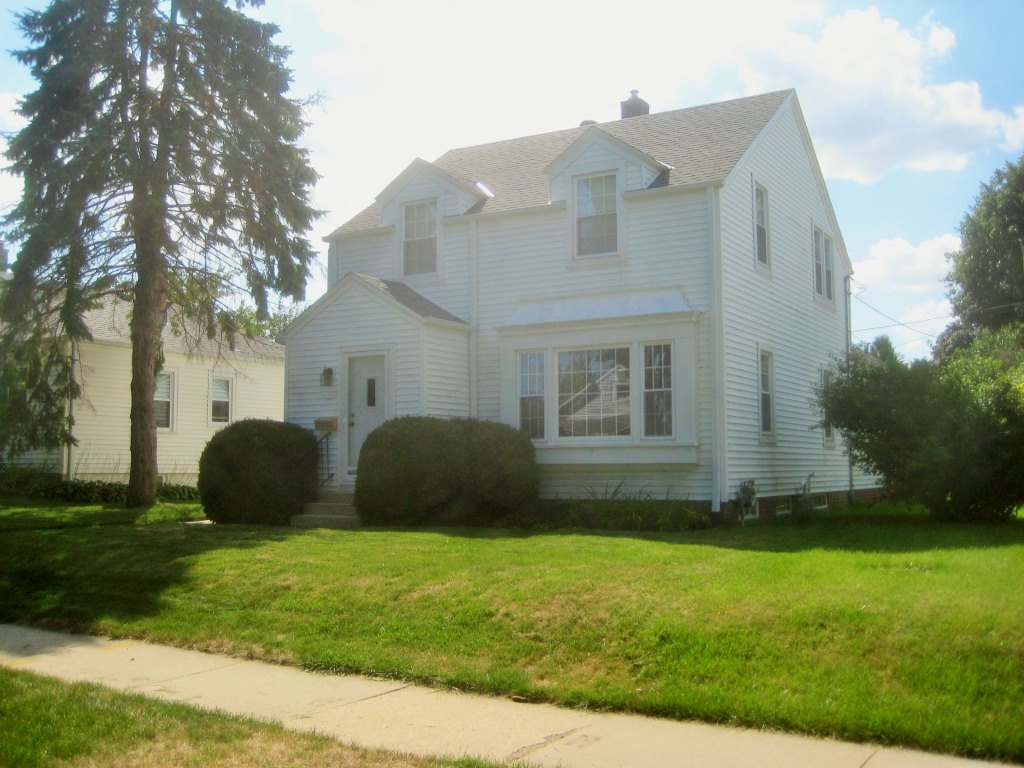 City Clerk’s Home Is His Castle. Photo by Michael Horne.

So you want to fight City Hall? Well, don’t storm off to the City Attorney’s office with your complaint — it will get you nowhere. Instead you must file a claim against the city with Jim Owczarski, the City Clerk. If you want to run for office, he’s the guy who will check to see if the signatures on your nomination paper are legitimate. If you want to open a tavern — or apply for any of 100 different licenses issued by the city — Owczarski is your man.

He also operates a television station, provides support and staff for the Common Council and its committees, maintains the city’s records, generates a whole lot of its correspondence, runs a library and research center, drafts the bills that become laws, and is the skipper of Common Council meetings, announcing from his podium each and every item on the agenda while seeing to it that Roberts Rules of Order are scrupulously followed and decorum is maintained.

The clerk is elected to a four-year term, which pays Owczarski $98,472.07 per year, but you don’t get to vote for him unless you are a member of the Common Council.

In Owczarski’s case, his ascension came in 2012 when he was chosen clerk after the retirement of Ron Leonhardt, for whom he had served as Deputy City Clerk since 2006 after being council records manager and legislative analyst beginning in May, 1999. Previously he had been a reporter for the Milwaukee Journal and Journal Sentinel, back when that newspaper was flush with money and staff.

Leonhardt, the clerk for a record 22 years, had previously served as deputy to Clerk Rose Gretenhart. This is not a position for on-the-job training.

While Leonhardt brought city government into the digital age with the introduction of Legistar, a legislation-tracking tool pioneered here and now used nationally, Owczarski has incorporated new technologies like Facebook and Twitter into the council’s communications toolbox.

Owczarski, in his spare time, served as the villain at the Bristol Renaissance Faire for eight years, and is a student of history. A summer vacation might include a trip to Waterloo — and I mean Belgium, not Iowa — and a visit to the HMS Victory, the flagship of Lord Nelson at the Battle of Trafalgar. During a Sister City event at City Hall this year when Milwaukee consummated its incestuous union with Zadar, in North Dalmatia, in Croatia, Owczarski spoke of the Neretvian Pirates and their impact on Zadar as if it were yesterday, and of the exploits of Ladislaus of Naples as if he were a newly elected Council member.

Owczarski can be seen around town at Shakespeare in the Park, performances by Dead Man’s Carnival and at the WMSE Rockabilly Chili Contest, and he has been known to call in (as “South Side Jim”) to “Packerverse,” the radio program of Ald. Nik Kovac.

For all of his sensibilities, it is something of a disappointment that Owczarski does not live in a stone castle with crenelated towers and mullioned windows, but rather in a simple two-story Colonial on the South Side. It’s so difficult to find homes with moats on these narrow city lots.

However, true to his interest in history, it is of note that the Owczarski residence is 75 years old, and that he is only the home’s second owner, having moved in just 12 years ago.

His house dates to August 1940, when developer Fred A. Mikkelson took out a permit to construct this home in the Warnimont Terrace Subdivision, platted in 1939 as a “low cost housing area.” The plans called for a 24-foot-by-26-foot building with “Dog House” dormers on the 632-square-foot second floor. Whereas a duplex could have been built on the site, this home was single family. The house had a 3-foot side yard to the north, rather than the permitted 3-foot side yard, and a whopping 18-foot side yard to the south, double the minimum, and now home to an overgrown spruce tree. The rear yard of 50 feet was twice the minimum, while the home, like its neighbors, was set back 25 feet from the street. The building, at 26 feet in height, was essentially a roofed cube. It had three bedrooms, a bath and a half-bath, a kitchen, living room and dining room with built-in oak buffet and china cabinet.

By September, 1941, as the clouds of war were darkening, Otto Sowa, a German immigrant born in 1910, and lucky to be in America, owned the home and took out a permit to construct a 22-foot-by-22 foot, $725 garage to house his motorcar. Sowa was to live in the home until his death at 92 in January 2003. He had served with the 11th Armored Division of the U.S. Army in Germany during World War II, and later as a director of the 1st National Bank of Cudahy, the M & I South Shore Bank and Trinity Memorial Hospital. He was a member of Tuckaway Country Club and the Cudahy Kiwanis. Talk about an immigrant who made good.

During his long occupancy, Sowa made a few changes to the home. In 1961 he hired contractor Clyde Senda to construct a 16-foot-by-18 foot addition to the south of the home, and in 1970, an 8-foot-by-10-foot kitchen addition, with its downspouts connected to the sewer. Later that year, Sowa went to the Board of Zoning Appeals to get a variance to enclose his front stoop, which is now sealed up nice and tight.

Today, the home sits white and serene on its block on S. Lenox St., just a few blocks south of Oklahoma Ave. World War II severely crippled the home building industry in America, and the Warnimont Terrace subdivision, which had just begun when war broke out, was not completed until years after its end. As a result, there is not the uniformity of architecture with a procession of two-story Colonials that Mikkelson perhaps envisioned. Instead the neighborhood filled out with the ranch houses of the postwar era. Their diminutive height makes the Owczarski residence practically tower above its neighbors, if not quite like a castle.

For the residence of a Renaissance man, the Owczarski landscaping paradoxically inclines more toward the Paleolithic, although there is no doubt Queen Elizabeth I would have been delighted to be presented with a bushel of the pears that hang by the hundreds from the tree in the back yard. A hedge that obscures the home from the boulevard-width alley showed recent signs of having been trimmed, with the clippings still on the ground, and the hedge clipper itself lying, unplugged, along the sidewalk. This appears to have been a labor performed under protest, since the dashing Owzarski is surely one to trim hedges with a sword rather than a fussy electric device. Otherwise the grounds are well-tended, which should not take much, since it’s mostly lawn. Perhaps some serfs from a nearby manor are permitted to pasture their sheep there. 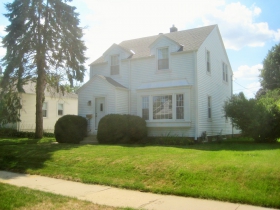 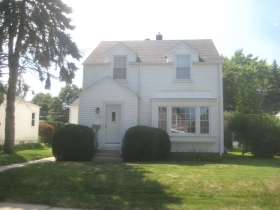 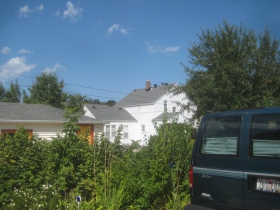 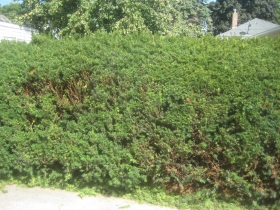 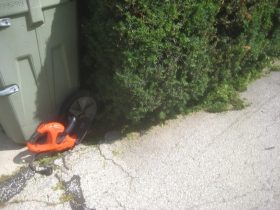 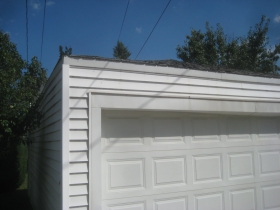 How Milwaukee Is It? The residence is about 5 miles from Milwaukee City Hall — and about 36 miles nearly due north of the Bristol Renaissance Faire.