The new Industrial Exposition Building gave a great vantage point for those photographing the city. 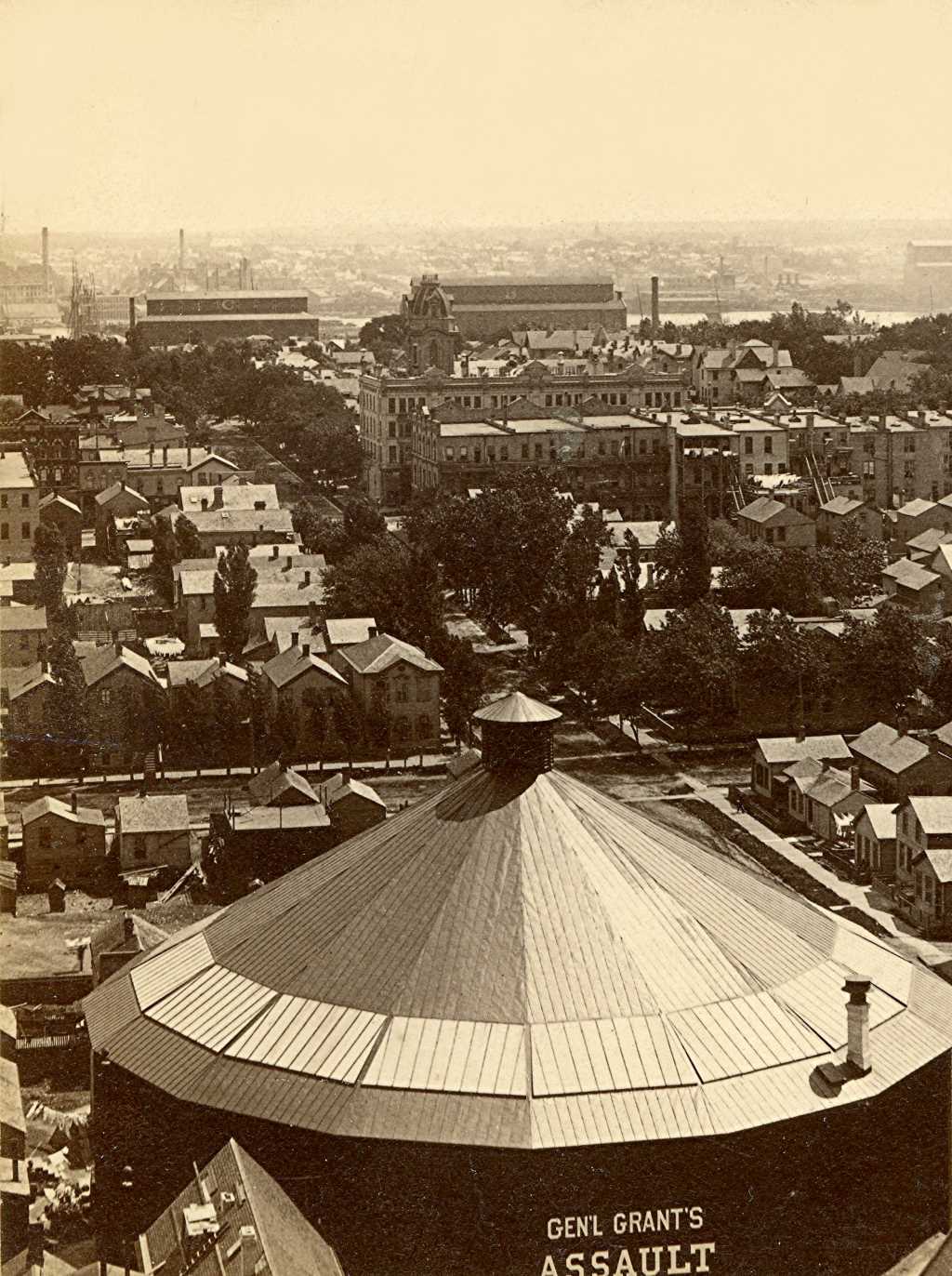 Among the stereoviews of Milwaukee done by famed photographer H.H. Bennett were sweeping cityscapes from the tops of tall buildings. For instance. He photographed views from the top of the Mitchell Bank and the County Courthouse, then located at what now is Cathedral Square Park.

The Milwaukee Industrial Exposition Building, which opened in 1881 and was located downtown, provided a new vantage point from its 175-foot-high polygonal dome. This view looks to the south and a bit west; Cedar St. (which later became Kilbourn Ave.) is the cross street. The other is 6th St. heading towards the large grain elevators in the background. You can also see the Menomonee River in the distance.

The Exposition Building itself would only last until 1905 when it was ravished by a massive fire. Nobody died from the blaze even though a large group was in the building for a card tournament playing skat.

Of special interest in this photo is the building in the foreground with the sign advertising “Gen. Grant’s Assault on Vicksburg.” A Chicago businessman, William Wehner, would bring artists here from Germany whose specialty was panorama painting. His company was the American Panorama Co. One of the company’s first productions was a panorama of the Battle of Atlanta, also called the Atlanta Cyclorama. This massive painting still exists although it currently is under restoration. Their first Milwaukee exhibit was this one featuring Grant’s assault, which would run from 1885 to 1887.

Panorama paintings would prove to be a short-lived trend, nearly disappearing by the 1890s (though the style had an impact on the dioramas devised by artisans at the Milwaukee Public Museum, which in turn influenced other natural history museums). Bennett was fascinated by the dioramas. Although he did not photograph the interior of this building and its panorama, he did produce stereoviews of Civil War panoramas in Chicago, St. Paul, and Kansas City. After 1887 this building used for the panorama would survive, but was only used for storage.

The Exposition Building, however, became a showplace presenting concerts, carnivals, expositions, festivals and gatherings of all kinds. After its destruction by fire, it would be quickly replaced by the Milwaukee Auditorium, which opened in 1909 and was renovated to become the Milwaukee Theatre in 2003.

One thought on “Yesterday’s Milwaukee: Panorama of Milwaukee, 1885”