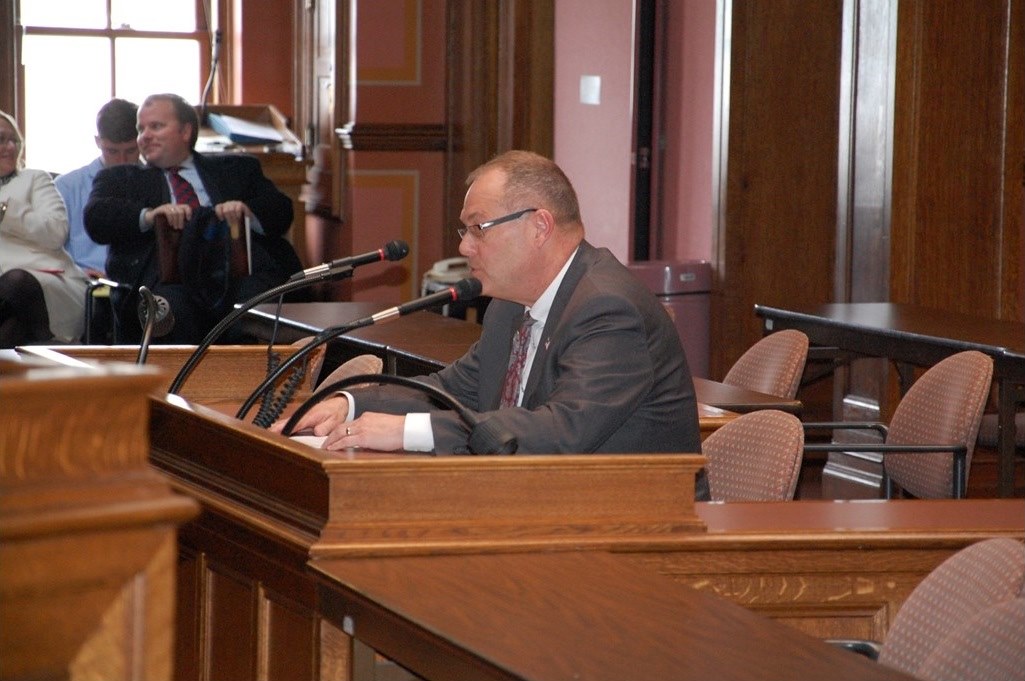 Terry Katsma. Photo from the State of Wisconsin.

Wisconsin legislators have begun quietly and unofficially discussing how the state’s 42 public universities and colleges – the 26 UW System campuses and the 16 technical colleges – might be realigned to deal with a continuing drop in state aid.

If approved, it would be the biggest realignment of higher education since the UW System was stitched together in 1971 by merging state colleges, Madison and Milwaukee campuses, and two-year centers.

Sandeen was hired in December after serving as vice president of the American Council on Education, a Washington, D.C., advocacy group for higher education. She said her old job taught her that the UW System is one of the top five public university systems in the U.S.

But, in her new job, Sandeen is implementing changes – including layoffs – to deal with cuts in state aid of more than $10 million to UW Colleges and Extension. No faculty will be laid off, but the 13 UW Colleges will be run by regional administrators.

Those changes are part of a two-year, $250-million cut in state aid to the entire UW System.

Sandeen said higher education in Wisconsin is “unique” because it has two systems:

*UW Colleges include 13 two-year campuses statewide that let high school graduates and returning students work toward Bachelor’s degrees usually earned after transferring to one of the System’s 13 four-year universities. UW Colleges and Extension is part of the UW System that is governed by the Board of Regents.

*The Wisconsin Technical College System (WTCS) operates 16 separate institutions, including many near two-year colleges, that focus on vocational and technical training. WTCS has its own statewide governing board, and regional boards operate local colleges and levy property taxes.

In Rock County, for example, UW-Rock County and Blackhawk Technical College have separate campuses in Janesville.

In the next school year, state aid will make up 33% of all technical college spending. Two years ago, state aid made up only 6.7% of all WCTC spending.

In other states, “community colleges” provide both academic classes and vocational and technical training, Sandeen said.

Since coming to Wisconsin, Sandeen said she has become a “huge advocate” of having separate systems. The 16 technical colleges “do what they do very well, and (UW Colleges) do what we do very well,” she said.

But, asked if dwindling state aid will prompt calls to merge UW Colleges and technical colleges, Sandeen said that has been discussed in the past – and is being considered again.

“I believe Speaker Vos is initiating a study group to look at that again; I understand that is happening,” Sandeen said, adding:

“I think it could work. I don’t have an opinion, one way or another. There may be savings in terms of administration. I don’t know. If we merge, we should still keep those separate missions.”

“The goal of having legislators study the issue is to determine whether the merger is worth considering,” Beyer added.

Beyer stressed that Vos has not named a task force on the issue, and nothing is officially being discussed by any Assembly committee. “I want to make sure that you know that it’s not a formal group,” she added. “Just offices doing research.”

Beyer did not know if any state senators are part of the discussions.

Beyer said first-term Republican Rep. Terry Katsma, of Oostburg, is taking the lead  in the preliminary discussions. Katsma ran for the Assembly after retiring from a 33-year banking career.

“I’ve heard the chatter, but I don’t hear anything in Sandeen’s comments I feel a need to respond to,” Merrifield said in an email.