Who Are the Homeless?

By Jabril Faraj, Milwaukee Neighborhood News Service - Aug 6th, 2015 11:57 am
Get a daily rundown of the top stories on Urban Milwaukee 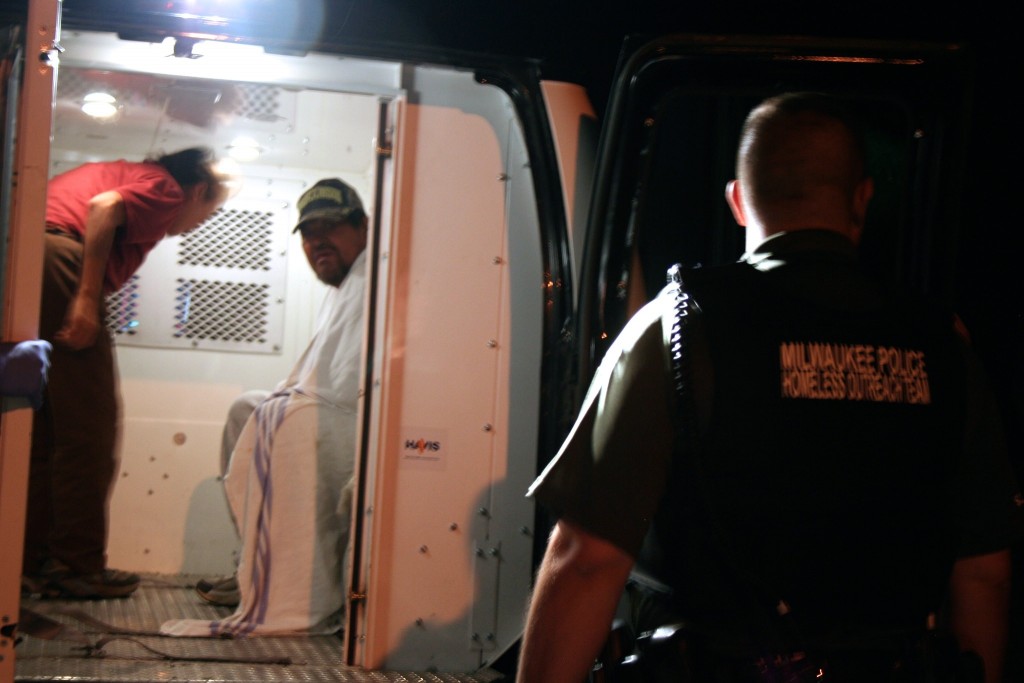 Carl and Annie, a middle-aged homeless couple, stand on a hill in Kosciuszko Park, each wrapped in what resembles a thin, white hospital blanket. There is a chill in the late July air, enough to warrant covering up, but not enough to deter the mosquitoes, which they abandoned their wooded campsite to escape.

Carl recently landed in a hospital emergency room, an occurrence that has become more frequent since his health has increasingly declined after being stabbed with a screwdriver about a year and a half ago. He said emergency medical crews had come for him twice the day before. Carl has diabetes, recently experienced a stroke and is taking four different medications.

Carl and Annie are a blip on the radar, only two of the thousands of homeless identified throughout the city and surrounding areas by Milwaukee Continuum of Care’s semi-annual Point in Time Count. The count, which takes place the last week of January and July, is required and used to determine funding, both local and federal, for organizations serving Milwaukee’s homeless population.

The recent July count focused on identifying individuals who are “chronically homeless” — they have been homeless for a year or more, have experienced at least four episodes of homelessness over the last three years and have a disability. The emphasis on this population was a result of a new focus by the U.S. Department of Housing and Urban Development (HUD) and a recent shift in Milwaukee County policy in addressing homelessness. The strategy called “Housing First,” which started July 1, seeks to get chronically homeless individuals off the street and in a stable situation before attempting to address other issues such as drug or alcohol abuse and employment.

Housing First is about “prioritizing [the] chronically homeless,” said Nancy Monarrez, director of the Milwaukee Homeless Management Information System. “They need housing so that they have an address, they can go to work … and start working toward something.” 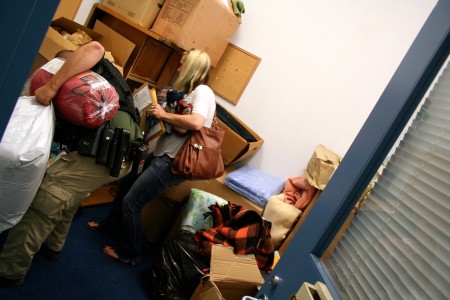 Annie and Carl have been together for nine years and have been homeless for at least the past six. Both have struggled with heavy alcohol abuse. Annie listed a number of previous jobs. She worked at gas stations, as a cashier, at a Ponderosa and at a casino. Carl has worked “on and off,” though not more recently than last year, at Joe’s Bait Shop across the street from the park. Ken Biskupski, the shop’s owner, said Carl was “a hell of a worker.”

“It’s not like they don’t want to work,” said Chad Stiles, of Carl and Annie. Stiles, who is part of the Milwaukee Police Department’s Homeless Outreach Team, said “every case is very different” but the majority of chronically homeless individuals have “some type of mental health issues” and “their story is multi-layered.”

“Homelessness is typically secondary to mental health, substance abuse, economic problems,” said Stiles. “A lot of times, they’ve had some type of trauma in the past.”

Those issues can be persistent barriers to getting chronically homeless people off the street. In some cases, it’s taken more than a year to get an individual in housing, Stiles said. He cited a distrust of police, bad experiences in a shelter and reluctance to stop drinking or doing drugs as reasons some homeless individuals would prefer to stay where they are.

“Research has shown that a client is much more likely to maintain their housing, less likely to go back into [a] homeless situation, if they have that supportive service piece attached to their housing. But you don’t make it a [requirement],” said Monarrez. “A lot of times, they’re just not ready. So, when you’re forcing someone, you’re making them get clean or go into detox, they’re likely to start using again, they’re likely to fall off the wagon.”

“The number one thing is that housing piece. A roof over their head can give them so much more stability than being out in the elements,” she said. “Once they get into housing, a case manager can work with them.”

Stiles said getting off the street is “not just a simple fix for a lot of these folks.” He’s confident the Housing First model will benefit Milwaukee’s homeless.

“In other cities … when they have someone that’s drinking and get them into housing their drinking decreases naturally because they’re not under the [stress] of living on the street.”

Monarrez said an important aspect of addressing chronic homelessness was realizing that everyone has different barriers to housing and that “putting rules in place really didn’t work.” 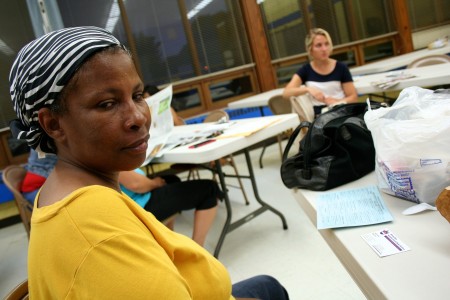 Gretchen Williams, 54, has been homeless for two months as a result of losing her job. Photo by Jabril Faraj.

Eric Collins-Dyke, outreach services manager with Milwaukee County’s housing division, one of three people working primarily on the Housing First initiative, said he hopes the program can “move the paradigm (for addressing homelessness) forward.” He also noted that Milwaukee’s adoption of the strategy puts it ahead of most other cities, nationwide.

The Johnston Center, 2150 S. 13th St., where Carl and Annie are on a 17-person waiting list, fills vacancies as they occur, said Khandi Gibson, the assistant property manager. She said any empty units are usually filled by the beginning of the month after they become available but wasn’t sure how long it would take to be approved if someone were to apply today. The units only accommodate single individuals.

Collins-Dyke said the county’s goal is to serve a total of 300 people over a three-year period and to have chronically homeless individuals placed in private housing within 72 hours of making contact. There are already 70 people “ready to go,” said Collins-Dyke, but only three or four have been housed so far because of hesitancy from landlords, who are not required to accept the vouchers being used to pay for the program. He said they “expect to make a big push next week.”

“Ninety percent of landlords tell me ‘no,’” said Collins-Dyke.

The Housing First initiative received $1.8 million in funding for its first year, from the city, the city housing authority and the county.

“We’re doing what we can,” Collins-Dyke said. “We understand we’re just scratching the surface.”

According to Monarrez, Milwaukee’s chronically homeless population is fewer than 500, less than one-third of all homeless individuals. The Milwaukee Continuum of Care 10-Year Plan to End Homelessness, which was introduced in 2008, supports “seeking permanent housing opportunities through Housing First mechanisms for any and all homeless persons.”

“You may have some population that’s homeless and … because you have to abide by HUD rules, if you’re staying with friends, you’re not considered homeless,” Monarrez said. “Unfortunately it’s just the way that it is.”

Gretchen Williams, 54, has been homeless for two months. Williams, who has done home care work since 2007, lost her job two months before becoming homeless. She was at Albright United Methodist Church, one of four mostly empty “cooling rooms” set up for the night, and hoped to leave with resources to help her find work, which she said was the largest obstacle for her to find housing.

Collins-Dyke said it is a moral responsibility to have services and resources in place to help people experiencing homelessness, regardless of whether they are chronically homeless. He acknowledged the line between those who are chronically homeless and those who are not is nuanced and “so varied it’s mind-boggling.” He said that he hopes the federal definition will eventually get more lenient.

“It’ll bust down the door of who we can serve,” Collins-Dyke said.

He also hopes that in 20 or 30 years Milwaukee can get to the point where the homeless population is at or near “actual zero.” It would take “more sectors of our system” getting involved in the issue to achieve that goal, he added.

While the preliminary indication is that July’s count may be lower than January’s, Monarrez said the next count should provide a much clearer picture of how Housing First is faring. “I sure hope that our numbers are much lower in January.”

Winter was already on Annie’s mind too — she talked about getting a generator to power a heater for the couple. Though Stiles recommended she and Carl get in touch with Collins-Dyke, he said he hadn’t yet received a call. Whether Carl and Annie are able to find a place and how soon could make all the difference.

“His health has gotten worse,” said Biskupski, who still sees Carl every now and then. “One day, you’re gonna miss him — he’s probably going to be dead.