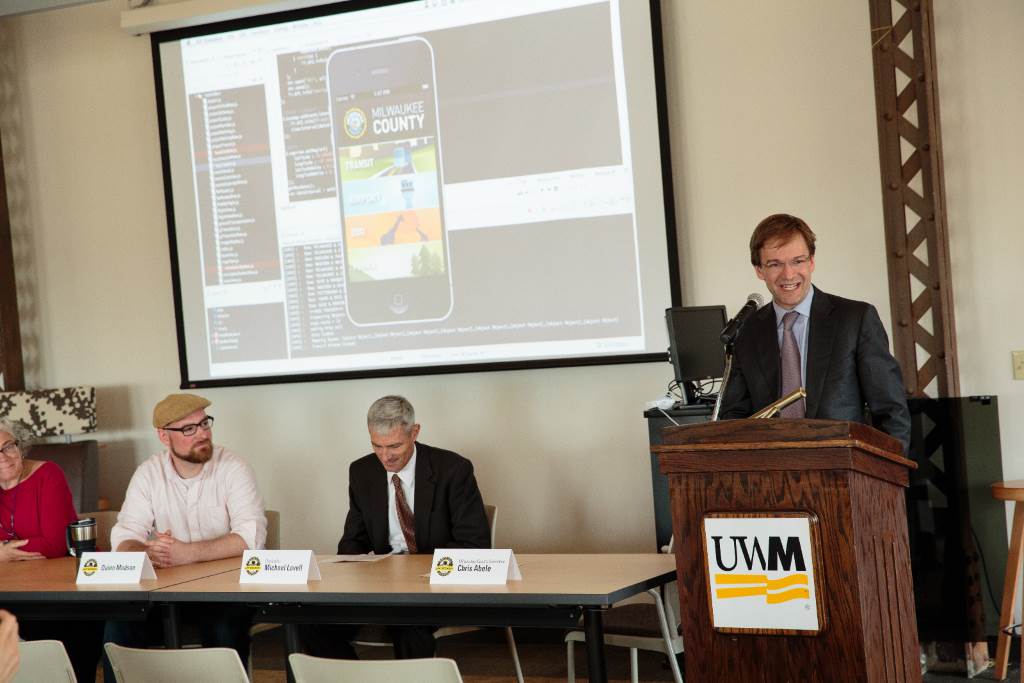 Chris Abele speaks at a news conference announcing the new mobile app created by UWM students for the county. Photo by Peter Jakubowski.

The startup initiative in the M7 region keeps taking big jumps forward as important players big and small stake out different pieces of the action.

Nothing could be more important. With major job growth in manufacturing a thing of the past, the region simply has to look to the high-test entrepreneurs to reinvent the economy. Job creation, on a net basis, won’t come from: city halls; large consolidating, out-sourcing corporations; well-meaning foundations; non-profit organizations; or politicians. Growth starts and ends with entrepreneurs of all stripes and sizes.

Well, there is one exception: government employment keeps expanding under Democrats and Republicans, despite sound bites to the contrary. Almost all our great private Wisconsin employers started here. That is reality.

But some of the enterprises have faded (Allis Chalmers, Schlitz, Blatz, Pabst, Amity Leather Products, Crucible Steel, West Bend Company and on and on). So we will always need generations of venture leaders.

There are many elements to a successful startup economy, but the two main elements: 1.) availability of early stage capital and 2.) a support system.

It will brand UWM as an “E-university” where students can learn to make a job as well as take a job. There is a good match between an access university like UWM and an entrepreneur university. Students who work their way through college are likely business creators.

That initiative is already under way as the UW—Milwaukee Research Foundation (UWMRF) leads on technology transfer to the commercial world and entrepreneurship education. For instance, UWMRF is fostering a Student Startup Challenge. And it landed a $300,000 federal grant to help 90 teams of professors, students and mentors to identify early customers for their business ventures.

The Lubar donation will accelerate the UWM progress.

The Medical College of Wisconsin (MCW) also is increasingly in the forefront. Exits –sales of startup companies – are generally the ultimate goal of entrepreneurs and their investors — the “ca-ching” — and MCW just had a big one. Intellectual property created by two of its faculty members, Aoy Tomita-Mitchell and Michael Mitchell, was the foundation for Ariosa Diagnostic Inc., which recently sold to Roche for between $400 million and $625 million. Applause, applause.

Even better, the couple is starting another diagnostic company on the new UWM Innovation Campus. Tai Inc. will develop a blood test to determine if a heart transplant patient is in danger of rejection. MCW is providing the seed funding; the National Initiatives of Health gave Tai a $3.2 million grant; and other Milwaukee investors put in $6 million.

This proves that Milwaukee can chin up to big time startups.

For other startups, there are a half dozen early stage funding groups in the M7 Region, compared to just two a decade ago.

In another jump, Chris Abele’s early stage fund has launched an accelerator space called Ward 4 in the old Pritzlaff Building. It is the latest in a string of new incubators and accelerators.

Meanwhile, lots of smaller startups are finding daylight and are adding jobs. Epic Creative in West Bend is an example. Jim Becker, Joe Rogge and Sandy Cashman were there when the video production company started on a shoestring in 1989. It grew slowly, but took off about five years ago as video content exploded. It has recently hired 20 people, mostly college graduates, bringing its employment to 87. These are high-pay “creative class” jobs.

Epic is looking for three more people as it jumps more into social media as part of a full agency strategy. Unlike many agencies, it does most of its production in house.

Such quiet stories are grounds for optimism alongside the big news at UWM, MCW and Ward 4.