By Devi Shastri, Milwaukee Neighborhood News Service - Jul 24th, 2015 10:09 am
Get a daily rundown of the top stories on Urban Milwaukee 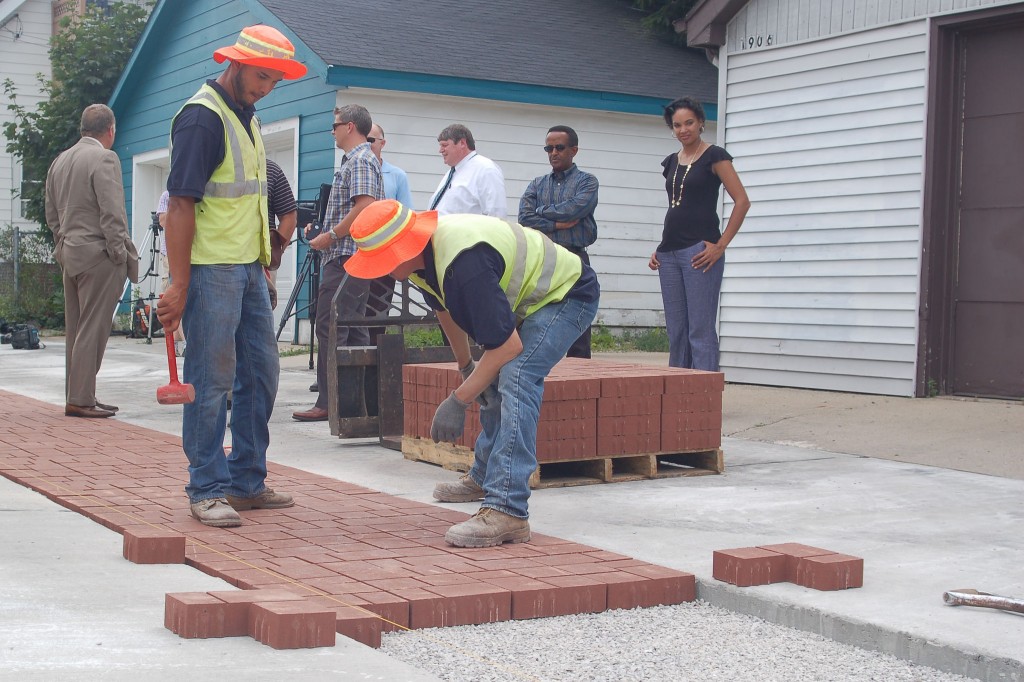 Landscapers strategize how to best place the permeable pavement in the Windlake alley. Photo by Devi Shastri.

On a hot summer day in the Pulaski Park neighborhood, landscapers are carefully placing interlocking bricks onto a smooth bed of gravel in an alley off of Windlake Avenue. The bricks are designed to leave room for rainwater to fall through. The simply designed green alley has the capability to capture and purify 15,000 gallons of water in a single rainfall.

The alley is one of two on the South Side that have been reconstructed to clean and harvest rainwater falling from the surrounding houses. Eight others have been installed throughout Milwaukee since 2008. The City of Milwaukee Department of Public Works and the Milwaukee Metropolitan Sewerage District funded the project jointly.

“It’s exciting that the city is moving in this direction,” said Bryan Simon, owner of Simon Landscape, which is reconstructing the alley. “Chicago has … a green alleys program where all the alleys are (made to be) permeable when they reconstruct and it’s my hope that Milwaukee is following suit.” 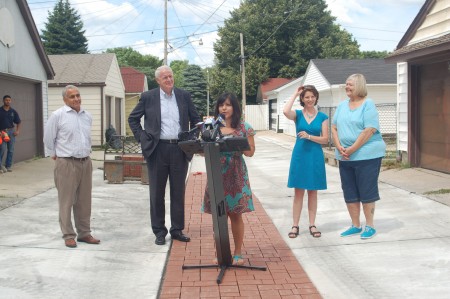 The Windlake alley is designed to filter rainwater by passing it though 2 feet of gravel and sand underneath. The system is capable of preventing cigarette butts, plastic bags, gasoline and even dirt from entering the Kinnickinnic River (and by extension Lake Michigan) so that residents have cleaner drinking water. Additionally, the ability to capture rainwater will help to keep the river from flooding into homes.

The project is part of the Pulaski Park Stormwater Management Plan, created by DPW, MMSD, Sixteenth Street Community Health Centers and GRAEF Consultants, and funded by the Fund for Lake Michigan.

The Fund for Lake Michigan also awarded Sixteenth Street a $150,000 grant for additional work on a residential stormwater management project and to support efforts to add more green infrastructure along the Kinnickinnic River similar to the green alley. A part of the plan will enable the organization’s department of environmental health to teach residents skills for making their neighborhood more sustainable.

“These homeowners and others in the neighborhood will be able to disconnect their downspouts and install rain gardens and rain barrels so that they can also be part of a solution to water quality issues,” said Vicki Elkin, executive director of the Fund for Lake Michigan.

The new alley will affect 40 homeowners in the neighborhood. Twenty of the property owners also received $140 grants from the city’s Neighborhood Improvement Development Corporation to install water-saving products in their homes.

“Neighbors received products like low-flow shower heads, dual-flush conversion kits (for toilets), new high-efficiency toilets and faucet aerators that help save water and money,” said Iris Gonzalez, community engagement specialist at Sixteenth Street Community Health Centers. “This was a great way for neighbors to leverage the impact of this green alley by making changes in their homes.”

At a news conference called to unveil the project, Gonzalez said that the neighbors are collectively saving almost 425,000 gallons of water per year due to these changes. Representatives from each organization involved in the project agreed that the support and investment from homeowners is pivotal in making the project a success.

“I feel that access to clean water is a right, but it’s also a responsibility,” said Elkin. “We all have to do our part to protect our water resources — and people here get that.”