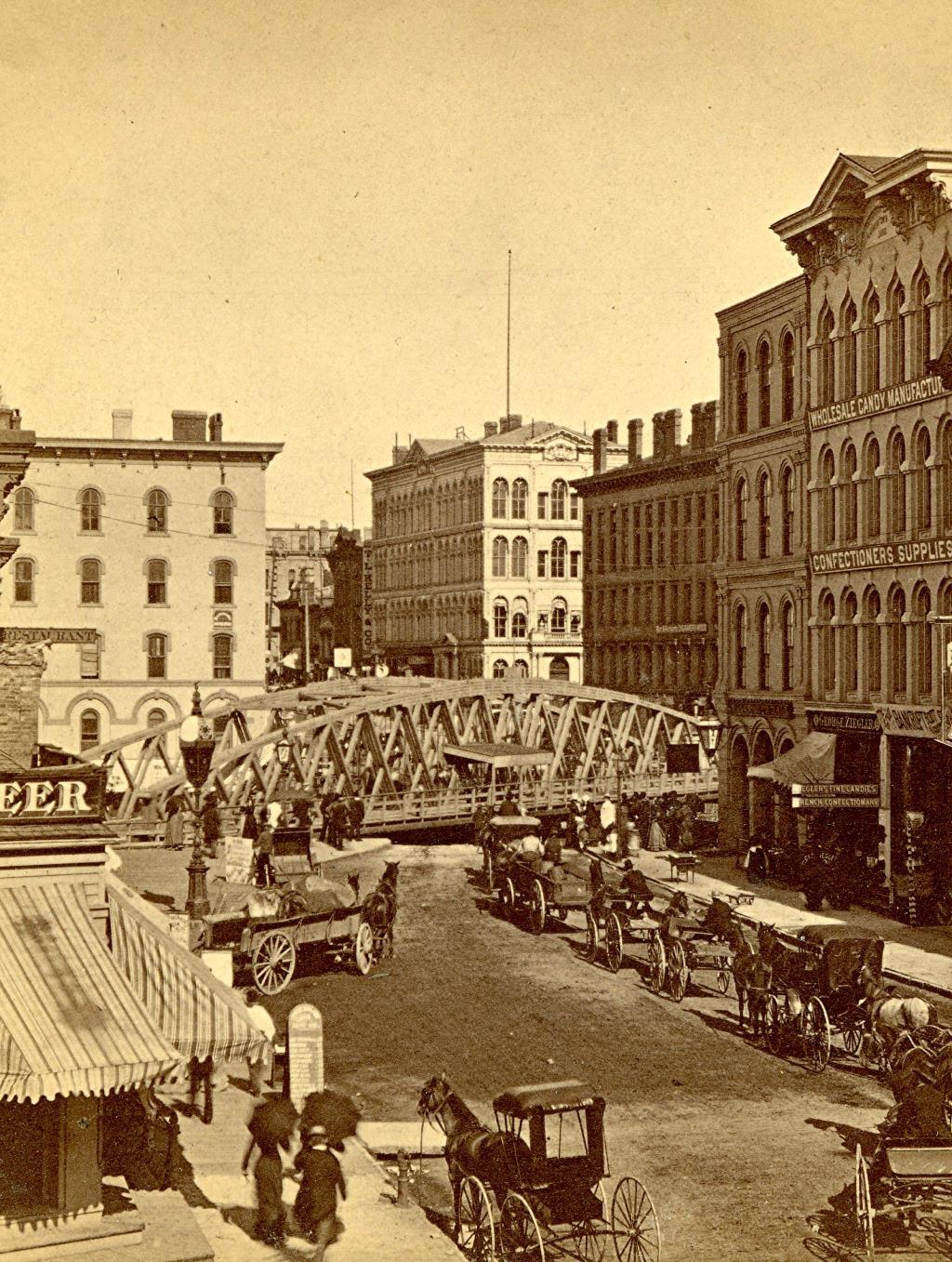 Famed photographer H.H. Bennett would arrive in Milwaukee at an opportune time to take his stereoviews. In 1879 the city was growing rapidly, having recovered from the financial crash of 1873. He would photograph the city extensively, especially east of the Milwaukee River.

This is one of his earliest views, entitled “837 At the foot of Grand Avenue.” The views were all numbered, 800 being the first. This view is looking east from what today is the intersection of Plankinton and Wisconsin. The bridge is turned to allow a boat to pass through, which happened frequently, as the Milwaukee River saw a great deal of commercial traffic. The bridge is a Howe truss swing bridge, constructed of wood. From the late 1860s to the early 1870s all of the city’s river bridges were replaced. This is a typical example of the newer bridges.

The building in the center should look familiar as it is the present-day Iron Block Building, first called the Excelsior Block. All of the other structures no longer exist.

Bennett experimented in what was high-speed photography back then. Earlier views of the city would be typically short of walking people and moving vehicles as they would often end up as a blur. This one captures a lot of downtown action.

In the next decade Bennett would take additional photos of this bridge. It was replaced with an elegant iron one in 1882.

Of note is the building to the far right. This is the business of George Ziegler, which advertises “Fine Candies” and “French Confectionary.” Ziegler, a native of Bavaria, would begin the business here in 1861, assuming full ownership of the company, which manufactured candy and sold confectioner’s supplies, in 1873. The company later moved to Walker’s Point, at 4th and Florida, and this spot would become the location of Gimbel’s Department Store.

The Ziegler Candy Co. became a Milwaukee mainstay for more than a century. By 1950 a Milwaukee Sentinel story would celebrate it as one of the two oldest candy manufacturing companies in the nation. “Many leading candy concerns operating in this region” are run by candy makers who were trained at the Ziegler company, the story noted. The company was the first in the state to manufacture marshmallows.

Older Milwaukeeans will remember the Ziegler Giant Bar, a chocolate bar with peanuts, first created in 1911, that became a local favorite in the years after World War II. The Ziegler company donated thousands of its Giant Bars to local schools at Halloween each year. Ziegler was also the first company to manufacture the candy raisin, also popular in Milwaukee for decades.

The company, alas, shut its doors in 1972. However, in 1990 descendant Bill Ziegler and his wife Mary Ziegler would revive the business. The new business is called Ziegler’s Half Nuts and is located in West Allis, at 9617 W. Greenfield Ave. The shop now sells the Giant Bar, made from the original molds and recipe.

One thought on “Yesterday’s Milwaukee: Wisconsin Avenue Bridge, About 1880”