A conservative group’s ranking of results suggests the state ranks 50th in the results of its reforms.

The conservative and Libertarian Heartland Foundation recently issued to its Welfare Reform Report Card, updating its report card from 2008.  It rates the states in two dimensions: policies and results.

For starters, the report rates states according to how well they have implemented five welfare policies:

Two other policies were included in the 2008 report but were dropped from the most recent one. The first, increased filing for the federal Earned Income Tax Credit was dropped because the authors were unable to obtain IRS data on the credits.

The second policy dropped was family caps, which try to discourage additional births among recipients by denying payments for children born while their mothers are receiving TANF (Temporary Assistance for Needy Families) payments. Wisconsin is a family cap state; its grants do not vary with family size. Family caps have been attacked from a number of directions—that they promote deep poverty, are ineffective in reducing pregnancy, and may lead to more abortions. The Heartland report’s comment is that “researchers have found those policies may have unintended consequences, and they are not believed to be as effective as once thought.”

When it comes to its policies, Wisconsin is ranked very high by Heartland: it’s tied for third place with two other states, up from 7th place in the 2008 report.

On these outcome measures, Wisconsin is rated 50th — dead last — among the states. The fact that Wisconsin rated near the top in policies and at the very bottom in performance suggests that the policies recommended by Heartland fall short in producing the desired results—more people working and fewer in need. At least in the case of Wisconsin, the apparent failure cannot be chalked up to policies given too short a time to show results. Wisconsin was rated 7th best for policies in 2009. 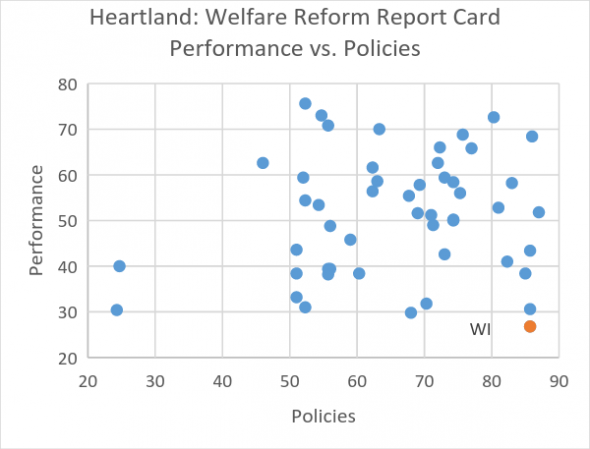 But as the plot to the right shows, there is little connection between the policy and performance ratings. Any correlation (slightly positive if all states are included, slightly negative if Massachusetts and Missouri, the two outliers on the left, are excluded) is not statistically significant.

The authors briefly refer to the “weak correlation between policies and outcomes.” However, this does not cause them to rethink the policies. Instead they ask the reader to take the effectiveness of the policies on faith: “The purpose of this survey is not to prove some policies work better than others – that research has been done well by others. Our goal, instead, was to bring together in one document data addressing widely agreed-upon measures of anti-poverty success and the most promising welfare policies. We are convinced states will see better results if they adopt the recommended policies.”

If reducing welfare requires both a carrot and stick, the policies advocated by Heartland are heavily skewed towards the stick side of the spectrum—work requirements, lifetime limits, and sanctions. But the policies heavily date from the 1990s, a period of abundant jobs. Jobs today are much harder to find, particularly in neighborhoods with high poverty. At best, Heartland is pushing a set of policies that are only a part of the solution—and probably a minor part as well. This is particularly true if one defines the goal of welfare reform as increasing both the number of people employed and their financial success, rather than just decreasing welfare rolls.

In an earlier column, I described a proposal from Milwaukee-based Community Advocates to address the carrot side of reducing the number of people on welfare. It included five elements, the first four of which either would make more jobs available or make them more attractive:

This proposal was estimated by the Urban Institute to reduce the rate of poverty by half or more. Perhaps the lack of correlation between the policies advocated by Heartland and the results reflects their one-sided bias towards punitive policies.

In the same column, I discussed Part I of an article by Christopher Jencks assessing the results of the War on Poverty, entitled “Did we lose the War on Poverty?” In Part I, he estimates that poverty, as understood in the 1960s, has been reduced by about three quarters.

In Part II (which charges readers to download), he tackles the question of which parts of the War on Poverty were most effective, concentrating on five programs:

Poverty has been among the most frustrating issues faced by the U.S. and Wisconsin. If progress is to be made, it is important not to fall in love with any particular set of solutions. Instead, ways should be found to measure the effectiveness of the solutions and modify or drop those that do not work. Doing so becomes particularly difficult for those, like the Heartland Institute, who have an ideological commitment to a certain set of solutions.