Mural on 16th and Mitchell meant as a universal message about Latino pride and culture.

By Devi Shastri, Milwaukee Neighborhood News Service - Jun 2nd, 2015 11:00 am
Get a daily rundown of the top stories on Urban Milwaukee 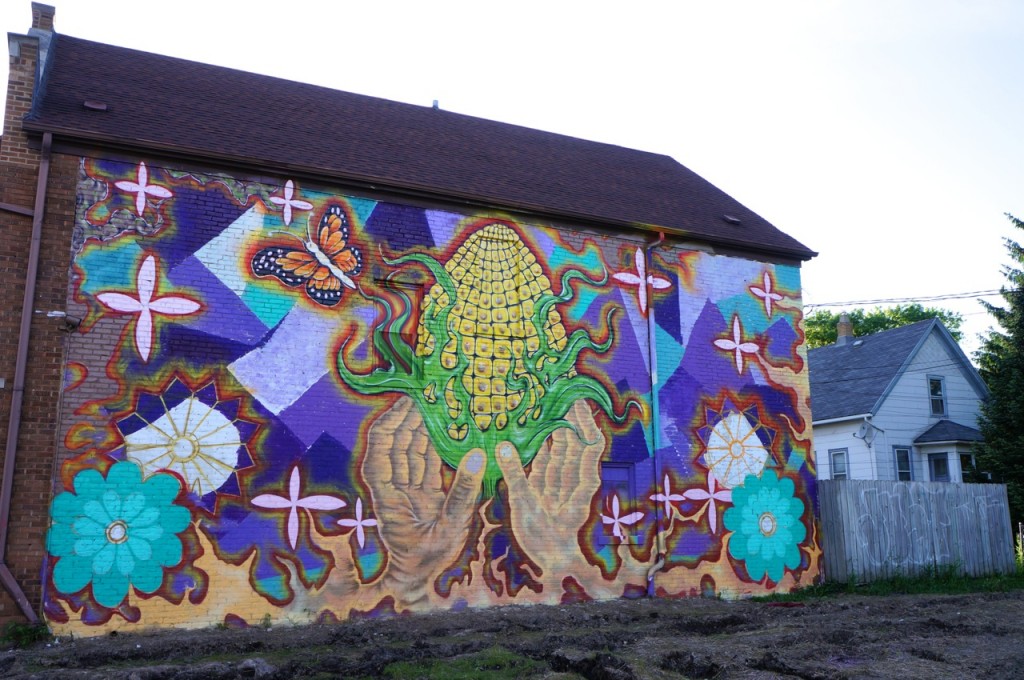 On a hot Saturday afternoon, Ramiro Arguta stands in a lift two stories in the air, intently shading his mural with a can of spray paint. He has been working in the sun for hours and is covered in paint splotches from the numerous cans scattered around his feet.

The local artist and owner of Rebel Ink tattoo shop is painting his third mural on Milwaukee’s South Side. Located at 1622 W. Mitchell St. in the Historic Mitchell Street neighborhood, it features hands rising out of the ground holding an ear of corn. 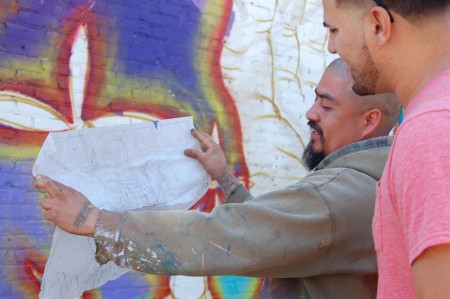 Arguta explained that the mural’s message is intended to be meaningful to any community member. The hands, which grow out of roots in the ground, are thankful for the corn, which Arguta described as the universal “semilla” or seed. The hands are offering the corn to the viewer, sharing it with the world.

“With the passing of time, in every culture from Latin America (to) America and the world … corn is important,” Arguta said.

He also includes hummingbirds and butterflies in his designs as symbols of freedom, and uses bright, eye-catching colors.

“When you see the mural, right away it just makes you happy (because) of the colors,” he said.

Arguta put in about 10 hours a day on the project, which is getting close to completion. The mural is being painted on the building that houses Valentinos by Lenny, a barbershop. Lenny Carrasco, the owner of the shop, provided Arguta with supplies and rented the mechanical lift.

“I started from nothing, and somebody helped me,” Carrasco said. “I want to help my people. … We spent more than we were told (we would), but I’m happy with (the mural).”

Carrasco said that as a Latino, born in Mexico, he wants other American citizens to learn more about Latinos.“I don’t want them to have a stereotype that we … come to sell drugs or (we are) gangsters. We are hard workers … I want (them to) know our culture.” 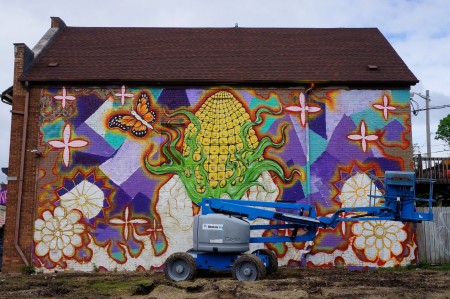 Arguta said his biggest challenge is finding people who are willing to invest in his art by purchasing supplies to offset costs. In the past, he paid for his supplies out of pocket and painted from a ladder, which added days to the project.

“Sometimes other artists don’t do this kind of street mural because first, nobody wants to pay you …Sometimes it’s hard to get everything that you need,” Arguta said.

Still, Arguta said he will not paint for just anyone.

“I do my own sketches,” Arguta said. “The first thing I tell the business owners (is), ‘It’s a mural for the community, not for your business.’”

Community members have received the mural with interest. Some passersby have stopped to talk with Arguta to ask about the piece or to hire him for another project.

“It’s good to do something nice (like this),” said Eli Crespo, 26, as he looked up at the mural. “It’s a form of expression and something that people enjoy looking at.”

Crespo had seen the mural walking by and decided to stop the next time he saw Arguta working to ask him to create a mural for his church. Arguta said he hopes his art will continue to inspire that type of interest.

“When I travel to other cities, like Chicago … or Mexico City, the urban art is all over,” Arguta said. “So I think Milwaukee needs more of that … some art with a positive message to everyone, not just to one kind of person or race. What I’m trying to do is leave a message to everyone.”