The Mansion That Moved

This 1890, $2 million Lake Drive mansion on the border of Shorewood once stood where Juneau Park is located. Blame it on the Socialists. 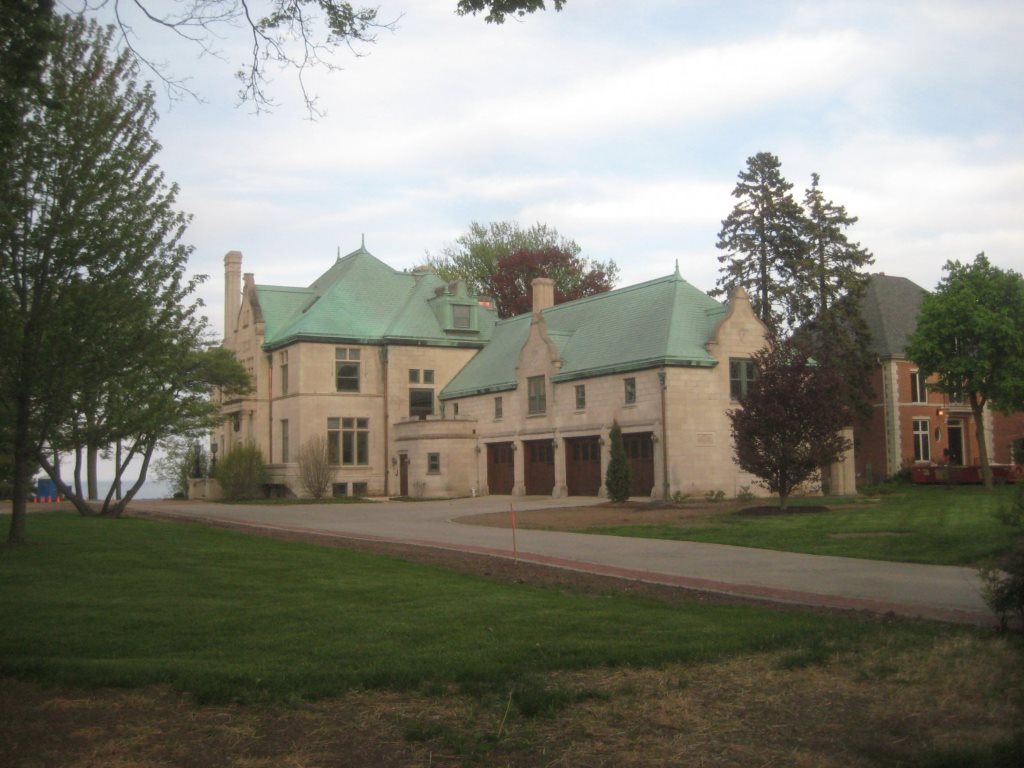 The answer: Nothing would replace the old ranch home. The lot has since been landscaped and the lawn seeded, and it provides a welcome bit of Lebensraum for the Mutschler’s 8,544-square-foot, 1890 stone mansion, which now occupies a combined lot of nearly 4 acres of the most valuable City of Milwaukee residential real estate.

While even residents of Milwaukee’s most prosperous district marveled that one of their neighbors had as much to spend on a cleared lot as they could spend to buy their homes, the general consensus is that the loss of the Sendik ranch is a gain for the neighborhood, particularly since it will not be replaced by a 21st century McMansion.

In truth, the Sendik home had crowded the Mutschler’s home, which itself had been spared the wrecking ball back in 1928. The home’s main entryway was on the north side of the residence, just feet from the Sendik home. It now opens onto a broad lawn with a lovely view of the lake, and with its neighbors at a respectful distance, as is appropriate for the rarefied air of Lake Drive.

The Mutschlers had bought their home in May, 2014, paying $1,220,000 for the Bedford Stone pile. They had previously owned a 1913 mansion down the street, so they are not new to the big house routine. The previous home had stood empty for years after the Mutschlers bought it. That’s because Boston-born, Harvard graduate Linda Mutschler had been posted to the London office of Merrill Lynch, from which she retired a decade ago at 40 as one of the firm’s top analysts. During the family’s London sojourn they kept the mansion in Milwaukee even as they bought enough antique furniture to fill up four shipping containers. That might be nearly enough to fill a portion of their current Lake Drive home, which contains 16 or 17 rooms. Jock Mutschler, a Milwaukee native, had worked for the Breadsmith chain here. Now, surrounded by his English furniture, he is the boys and girls soccer coach (and what else could he be, with a name like Jock?) at the University School of Milwaukee, where his wife is a member of the board.

So yes, the Mutschlers must pal around with the sort of wealthy elite who sit on the U School board, and yet they can thank the Socialists that their Lake Drive home even exists today. The home was built in 1890 during the gilded age by real estate speculator and art collector Samuel Augustus Field, but it was located miles away from where it now stands.

Oh, it did overlook the lake. A for-sale ad in 1919, after Fields’ death extolled the home’s “superb lake views — superior construction — wonderful location — A quality homestead in the extreme — at a price unparalleled in the annals of Milwaukee Real Estate.”

But its “superb lake views” at that time were not in its current Downer Woods neighborhood, but at 303 Martin St. on what is now known as E. State St., and what is now part of Juneau Park.

Which is where the Socialists come in. They got involved because they ran the city government at the time, and decided that the public needed more open space in the rapidly growing city. The lakefront mansions of the wealthy just north of the Leif Erickson statue and south of E. Juneau Ave. were a prime target for their improvement plans, and the 14-acre expanded Juneau Park is their legacy.

Most of the homes that were displaced by the park’s expansion, like that of Louis Allis, were torn down, but a fellow named George Kuehn, who bought the home with that “unparalleled” price from the Field estate in 1920, had grown attached to the dwelling, which now housed his art collection. Accordingly, eight years after buying the place, Kuehn had it dismantled stone by stone, with each rock numbered for reassembly at its new home at what was then 1000 Lake Drive. In the process, the building was shrunk to two stories from three stories, flipped 90 degrees on its axis, with the spare stones used to build an attached, heated, four-car garage, and 1,850 sq. ft. apartment above. One of the stones, still visible on the building, bears the old address of “303.” At the time, the lot to the north that later held the Sendik home was still part of the property.

The Kuehn family spent several decades in the place before selling it in 1962 for $105,000. The residence has a built-in mahogany sideboard, intricate carvings and incredible plaster detailing. The master bathroom is lined in marble, prospective purchasers were told.

By 1980 the home was in the hands of Florence Rust, an eccentric woman with a fondness for old mansions, and not quite enough money to keep them up. The assessor came by and took a look at the place. He called it “an oversized, overbuilt mansion with physical and functional obsolescence.” Assessors can be so heartless in their judgments!

In 1983 the assessor was still not done venting. “For this type of home, the kitchen which is original seems totally inadequate and functionally obsolete,” he wrote.

“Maintenance is a problem for the current owner — things could go downhill fast if she doesn’t keep up with it. She is having a problem thus far.”

Rust’s problems, at least in Milwaukee assessment circles, ended in 1991 with her death. The home came into the hands of Converse B. and Lovinia A. Smith, who paid $680,000 for it in 1992.  Connie and Lovinia tackled the obsolescent kitchen to the satisfaction of the assessor that year. “Kitchen has been totally remodeled,” he noted, with 40 linear feet of granite counter, an 8-burner range and other accoutrements in the kitchen by 2007.

On October 10th of 2005, the Smiths sold the home to real estate investor Tim Brophy, who was that era’s poster child for Slumlords. Brophy paid $2,000,000 for the home and sold it the same day for $2,100,000 to Robert G. Hawk. Hawk put money into improvements to the old place, but wound up losing it in a foreclosure action in 2013. By that time, Hawk was dead. The Bank of New York Mellon, which was stuck with the property and a $1.85 million loan, sold it to a company called Polymathic Properties for a little over $1.1 million on April 16th, 2014. Polymathic is a California company specializing in distressed properties, and a month after it bought the home it was sold to the current owners for $1,220,000.

The Mutschlers moved in with their family, and coexisted with the Sendik ranch for about 8 months when it, too, came on the market. The ranch home had had a slate terrace in the rear and other amenities, like a built-in swimming pool. In 1972 the assessor rolled around to take a look at the place, but nobody was home. “Viewed pool thru patio doors,” the assessor noted. “There is a wet bar in the pool room,” he added.

In 1994 during a site visit by the assessor, Sendik was home, and not in a very good mood. “Owner complains that pool room is detriment to home,” the assessor noted. “Must maintain all year long. Also complained that taxes are too high. Owner did not want to disclose cost of kit. remodeling.”

Back in 1953, when the lot was still vacant, and in the hands of the Kuehn family, a neighbor complained about the illegal barbed wire fence that encircled the lot.

The owners explained the offensive enclosure by noting that “the public has also carried on various indecent and immoral parties on the lakefront to the rear of these properties and frequently used the beaches there without any clothing on whatsoever,” the observant attorney for the owners noted in a letter to the city. The public ignored a previous fence, “climbed over and through it or cut the wires” in their quest to access the nude beach below.

This rambunctious behavior engaged in by the depraved youths of the early 1950s is especially distressing to this writer. This was my parents’ demographic. They lived nearby on N. Frederick Ave., my mother was a fan of the lakefront, and I was conceived in 1953. When she took me to Bradford Beach as a child, was she actually revisiting the scene of the crime? Mom, you’ve got some explaining to do. 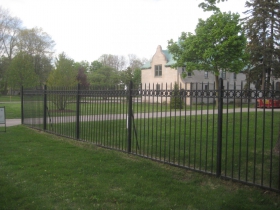 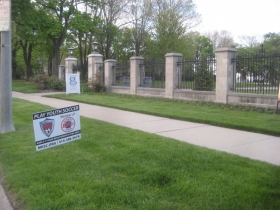 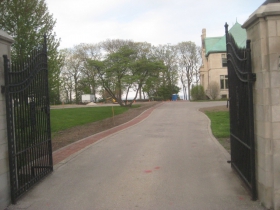 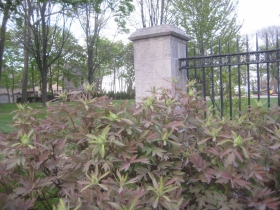 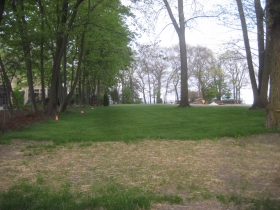 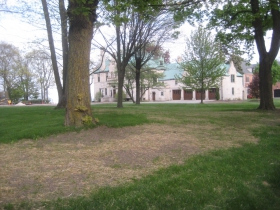 How Milwaukee Is It? It is 3.8 miles to City Hall from this, one of the most northeasterly of the City of Milwaukee’s residences.

Fun Fact: This is decidedly a home built for entertaining, and the current occupants seem prepared to do so, despite managing a busy schedule. Linda Mutschler has written a book called “Fast Track to Fine Dining,” which solves the thorny issue of how to prepare a feast quickly when, for example, the Board of Trustees of University School Milwaukee descends for an impromptu pot luck.

3 thoughts on “House Confidential: The Mansion That Moved”