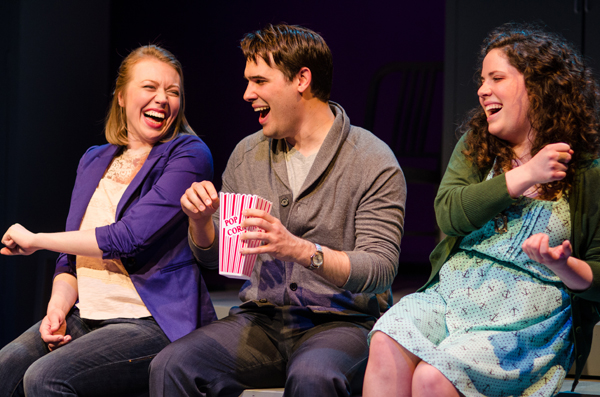 When done as charmingly as it is by In Tandem Theatre (through May 24), Little by Little sneaks up on an audience through unpretentious pride in the simple. That requires hiding how much planning and skill were involved in making patrons feel they have stumbled into a community theater of familiar Americana moments as three friends turn into adults with the kind of romantic entanglements we all have lived through.

Director Chris Flieller has subdued any instinct toward showoff show biz to solve the elements that make this musical difficult in our age of cynicism.

Back in the late 1990s, a devoted coterie of followers helped this musical survive even an indifferent review in the New York Times. Flieller has wisely stripped this production down to essential directness for his Tenth Street Theatre and made a unknown cast inhabit the subtleties. There is a deliberate effort to allow humanistic moments to dominate and underplay the theatricalities. That opens up the commonality of experience that inspired Annette Jollies and Ellen Greenfield (who wrote the show’s book) to fashion so recognizable a story.

The first challenge was making the storyline interesting even as we are meant to anticipate how it will turn out. So it’s a theater piece that slyly forces us to understand the truth under clichés.

An even bigger challenge is that many patrons may fear the show is too musical – with no dialogue and every moment told in singing. No, it’s not Broadway’s newfangled semi-operatic “how long can I hold this note” style. Nor is it old-fashioned song and dance or operetta. Rather it’s an intimate musical with just trios, duets and solos that are of a piece (commenting on each other) and require intricate and powerful harmonics and traded phrases. They must sound as natural as conversation and open to soft insights into people, though there is a smooth and somewhat schmaltzy pop awareness from composer Brad Ross and the smartly underplayed lyrics of Hal Hackady.

Flieller and his astute music director and pianist David Bonofiglio (who ought to be come out for a bow at the end) make sure we lean into what is happening more than how it is being sung (and they could just call attention to the strong voices). The result is we focus on the story and characters and forget there are never words without music.

It couldn’t work without a cast open to the director’s emphasis on observance of each moment as they pose and interact in such familiar patterns. So credit three performers more known as singers for rising to absorb the best acting lesson of their lives.

There are no surprises as two girls becoming young women share everything except their rivalry for their lifelong male pal. As he becomes the Man, he is too full of his own dreams to recognize the tensions – or the humor of the tension. Woman No. 1 is the most sexually confident and hungry for the perfect mate, and thus the most likely to be dissatisfied. Woman No. 2 is sick with wallflower longing and sarcastic awareness of her low place in the triangle. As the relationships unfold and crumble, the trick is to make us empathize with what we know is coming.

As the callow youth turning into an even more callow man, Michael T. Black has the hardest part to make believable, demonstrating every stereotype of the self-centered male. Black doesn’t settle for the expressiveness of his voice, which can move seamlessly from little moments to big finales. He allows his character’s growing confusion and frustration to control his behavior, which subdues the more obvious plot  transitions.

Jenna Vik plays the selfish shallow side of her role a bit hard, relying on a dominant smiling manner, but when she relaxes and concentrates on the underlying feelings, she grows stronger. The part requires us to like her for a while, then dislike her, then care for her again, and she is clearly learning how genuine acting insights lend lasting power to the vocal talent she can always fall back on.

By deliberately allowing the audience to discover her as the most touching of the trio, Rachael Zientek is almost the production’s star. Despite the vocal fluidity of an amazingly good voice and unforced range, the appeal is all in how she relates to the others. It is her apparently effortless grasp of the character’s hurt, sardonic amusement and hidden love that becomes the glue for this three person-friendship.

The costume changes from onstage closets attempt with mixed clarity to communicate the differences in age and attitude.  But at least set designer Steve Barnes and costume designer Liz Shipe are not calling attention to their contributions, which would hurt this presentation.

More than two dozen songs are so interwoven that their relationship to each other is little noticed as separate tunes. Some, like “If You Only Knew” and “I’m Not,” reveal the emotions more subtly than their titles do. Others like “Popcorn” become a theme about friendship. A few are time fillers, like “A Little Hustle,” but even that song interlocks with other tunes. There was an unabashed decision to put the meanings first and make the musical expertise as ingenuous as an unspooling thread – and the director was dead right.

You might expect experienced theatergoers and critics to be so hardened that they can’t succumb to such well-done sweetness and sentimentality. That’s a fiction disproved here Little by Little. 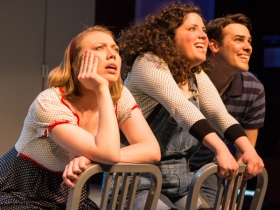 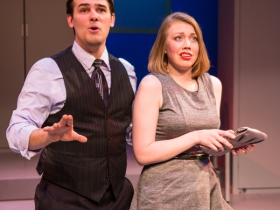 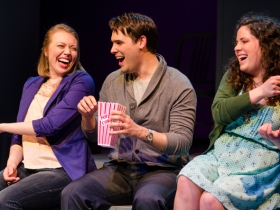