How to Transport Dogs By Bike

Right now I'm leaning toward the Xtracycle Edgerunner to carry my two dogs, but the bike industry is coming up with other intriguing options.

By Dave Schlabowske, Bike Federation of Wisconsin - May 1st, 2015 01:08 pm
Get a daily rundown of the top stories on Urban Milwaukee

My two dogs are both about 14 now and too old to run with me all the way to the park or trails. I actually found Misha, our Husky, on the side of the road while biking from my west side home to the old Bike Fed office on the east side one morning 13 years ago. She was a puppy, running loose in a busy intersection at 35th and Lisbon.

I pulled over and lured her into a grassy area at a nearby church and called Milwaukee Area Domestic Animal Control. They picked her up, and I continued on my way to the office. After work that day I met my wife and then three-year-old daughter for dinner at La Fuente Mexican Restaurant. After telling the story about finding a dog, my daughter asked for a penny to toss in the fountain at the restaurant as she often did.

When she got back to the table she excitedly asked “Guess what I wished for!” My wife and I looked at each other knowingly, and we ended up adopting the Husky soon after. She was a good runner and since the Bike Fed has a dog-friendly office policy, for years she often ran along side me the entire 6 mile commute to work. When I went to work for the city, she had to stay home, so we got another rescue dog, Brigit the Border Collie, to keep her company during the day. 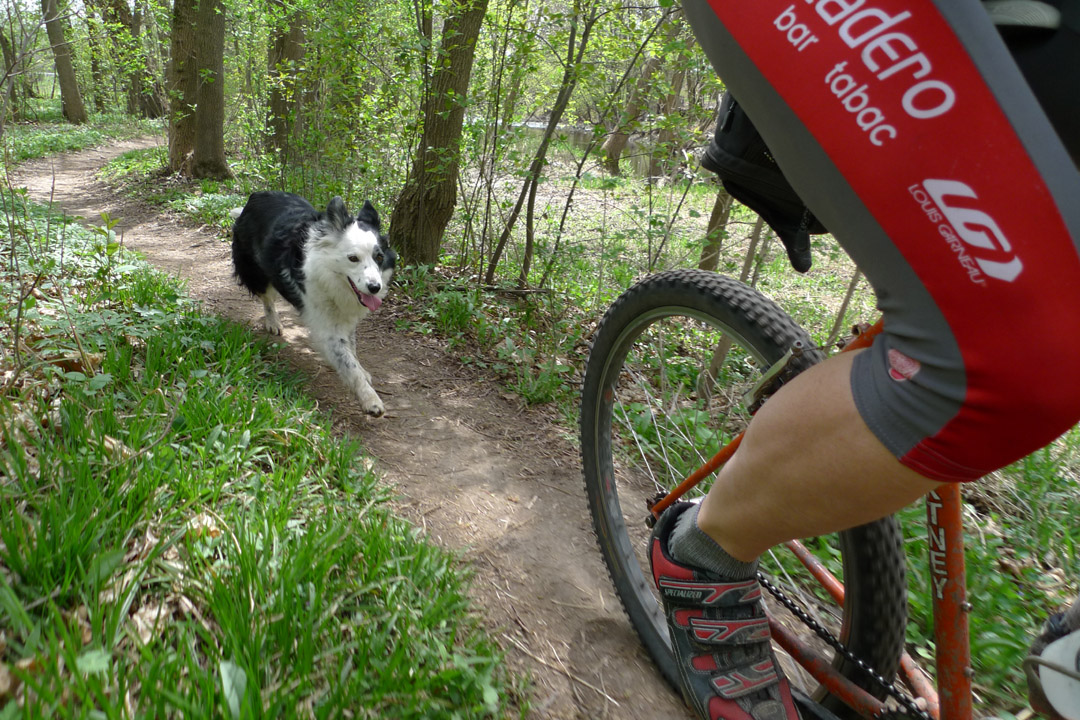 I typically only ever took one dog at a time on the local mtb trails. I kept a leash in my jersey pocket to get them their or in case we ran into other people. (Photo by Dave Schlawbowske)

Over the years, they have both run with me while I commuted, skijored, biked to the park or on the local mountain bike trails. They still both love to run, but have gotten to the age that if we try to go more than a mile or two, they are both limping and sore the next day. I have been looking for a good way to get them to the park and trails by bike, hence I have been testing cargo bikes for the last year or so. 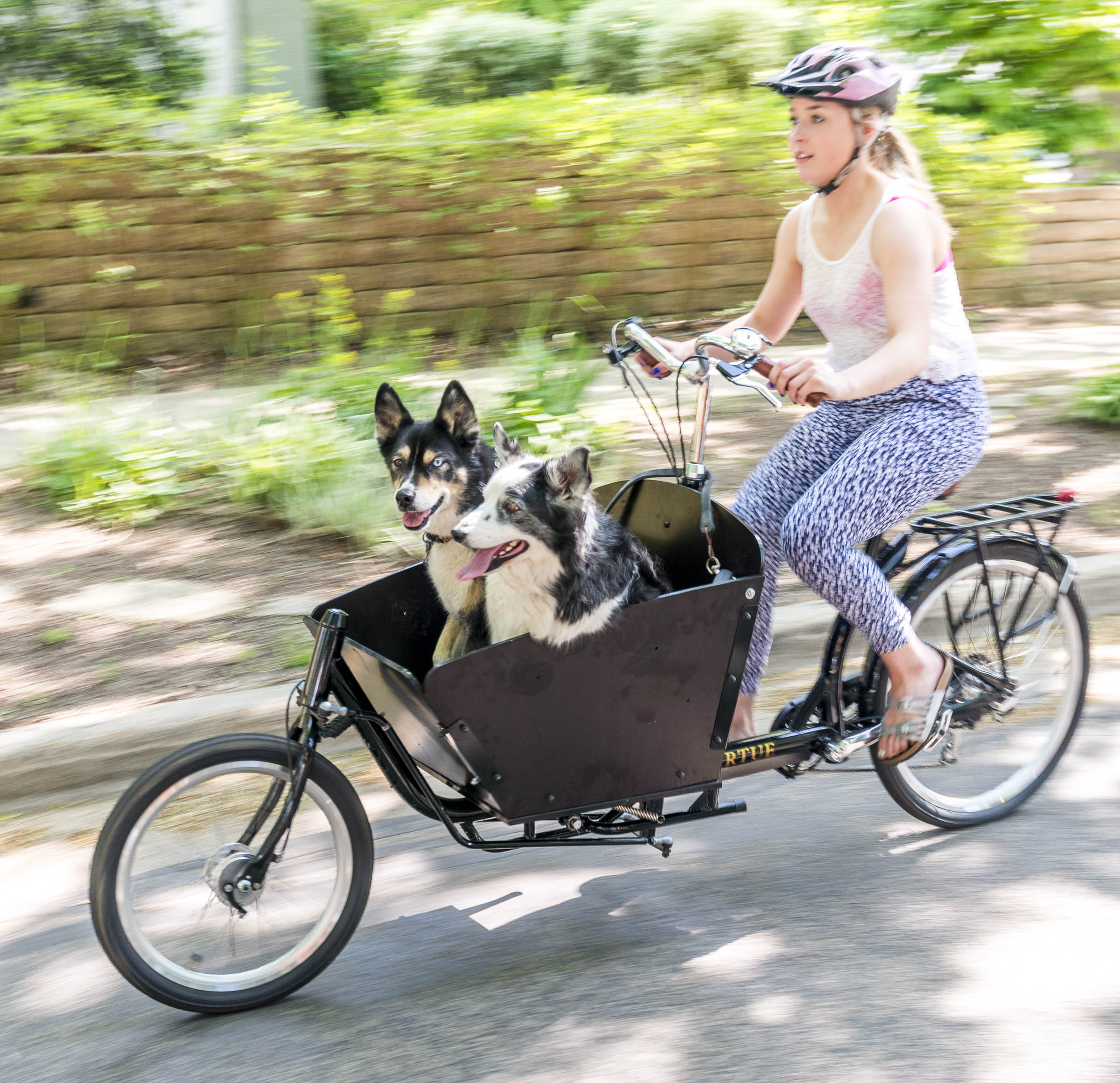 A while back, I tested the Virtue bakfiets, which I really liked, but the dogs (both dominant females) didn’t much like being crammed into the box together. I love the Dutch-style cargo bikes and the dogs would have gotten over their personal space issue, but honestly, the long-tail is a more versatile bike for me. The biggest advantage a long-tail has over a “long-john” or bakfiets-style, front-loading cargo bike is that I can sit on the back and take photographs while someone else pedals. That is a big advantage considering all the stories I photograph.

The long tails also have a bunch of great accessories. The newest thing I tried was the sidecar for the Xtracycle Edgerunner, which I borrowed from Coast In Bikes to test over the weekend. It attaches with a pretty ingenious use of two quill stems that allows it to tilt as you lean the bike around corners. Initially I thought I could get both dogs onto the sidecar and teach them to hop on and off., but they refused to sit together on the little space. I was a little worried about the sidecar’s open wheel too, so I didn’t force the issue. 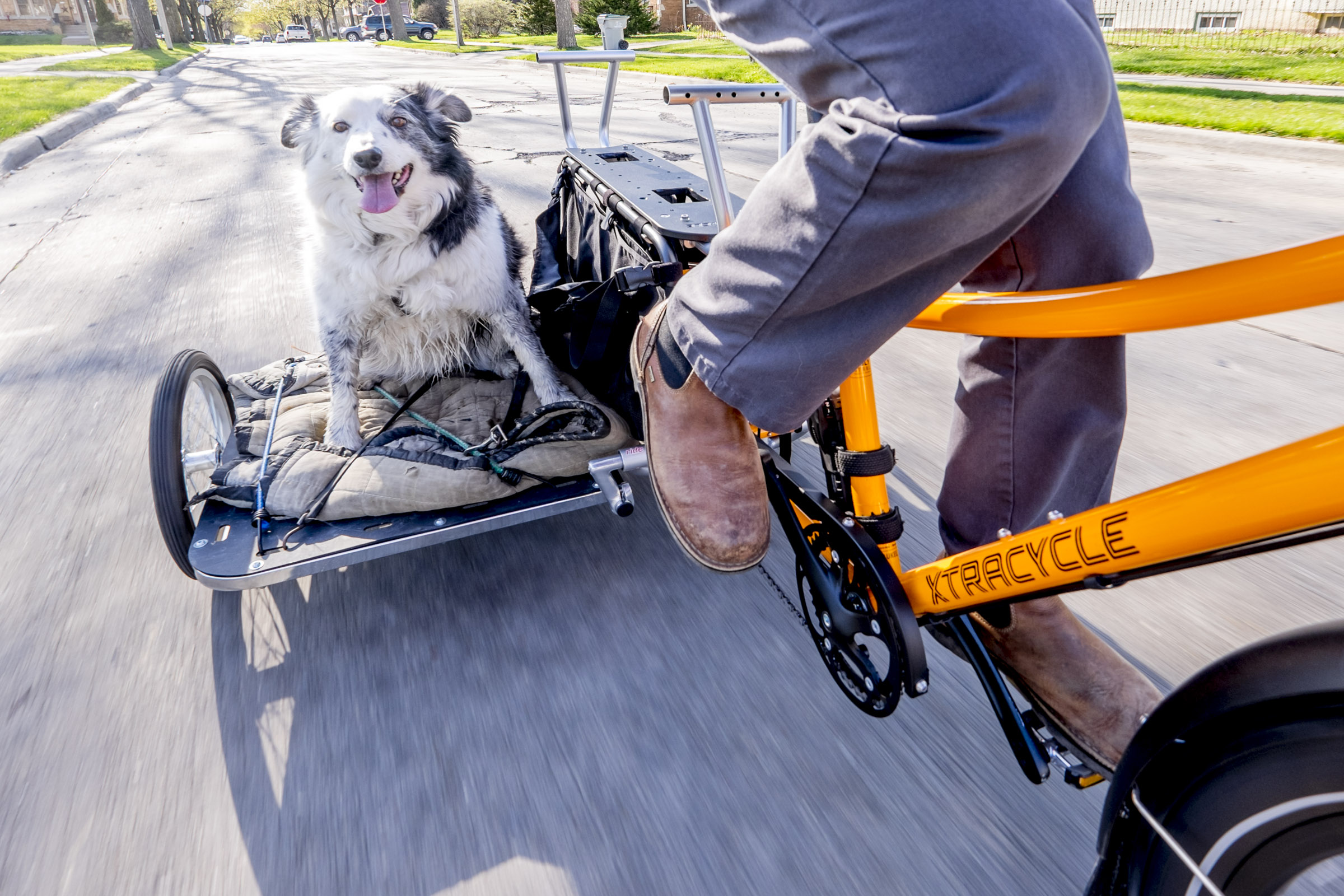 Apparently the sidecar only has room for one dog at a time. (Photo by Dave Schlawbowske)

No problem is too much for the ever-adaptable Edgerunner though. I just bungied a couple big plastic tubs to the back, on top of the U-tube accessories that also serve as foot rests when I am sitting on the back taking photographs. Giving each dog her own “bucket seat” worked out perfectly. Those U-tubes also hold cargo that you can load into the X-1 Cargo Bags that come standard with the bike. 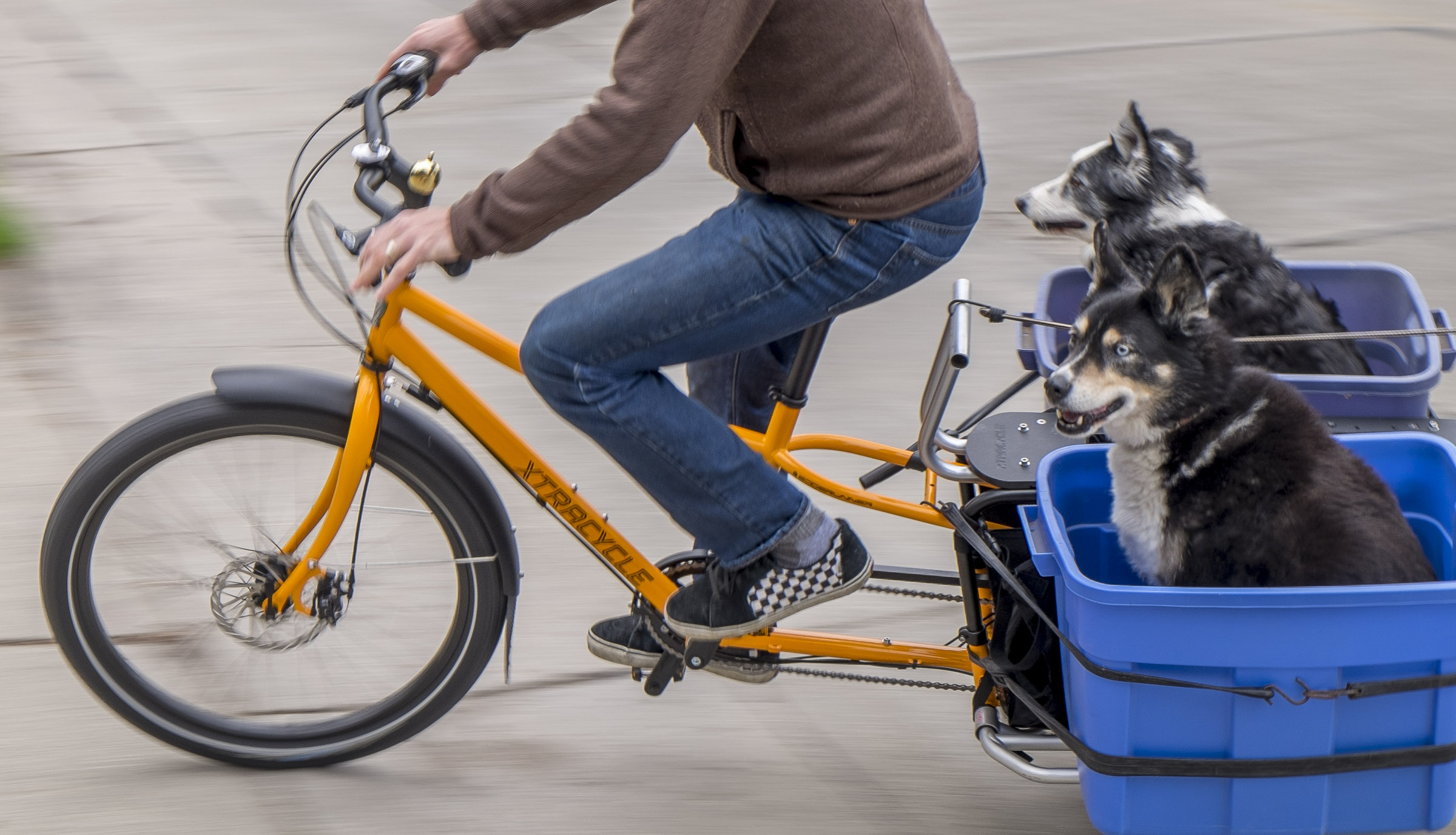 Happy dogs in their bucket seats. (Photo by Dave Schlawbowske) 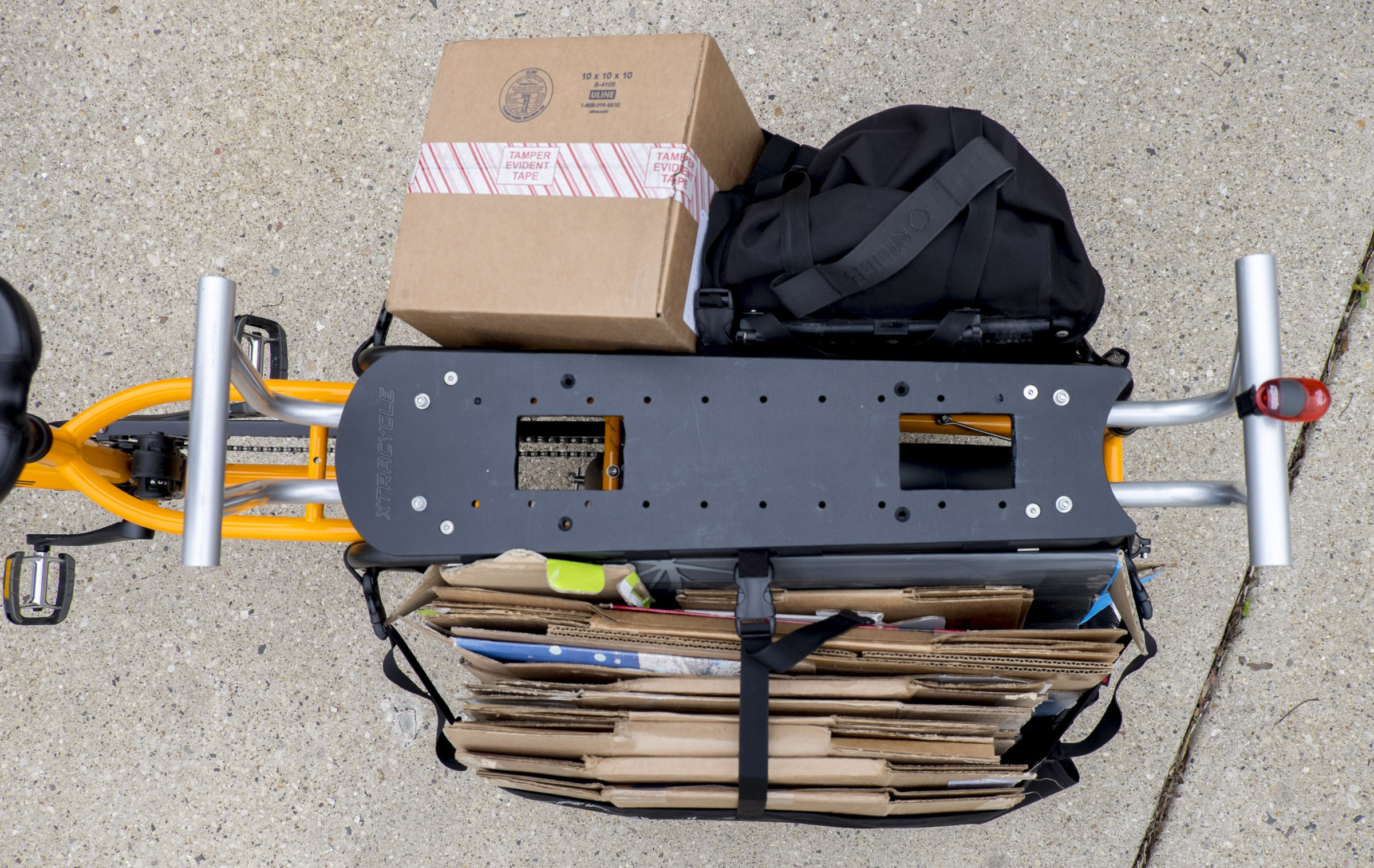 Even loaded with flattened cardboard for recycling, a package to the UPS store and a pannier full of groceries, I still had room for more on the Edgerunner. (Photo by Dave Schlawbowske)

The model Edgerunner I tested from Coast In Bikes had a Nuvinci 360, step-less, internally-geared hub. You just twist the shifter as little or as much as you want and the gearing is infinitely variable. There are no jumps or skips and you can find the perfect speed to match the hill and load you are hauling. I really liked the feel of the Nuvinci, but I don’t think Xtracycles come with them. You can still get this one that I tested from Coast In if you want though. I included a little video about the Nuvinci below to explain it more.

The only complaint I had with the Xtracycle Edgerunner was with the double kickstand. It was very difficult to engage with my foot, particularly if I had a heavy load on the bike or one of the bins on the back. Sometimes I had to balance the bike and squat down to reach in with my hand to lower the kickstand, then quickly stand up and put my foot on it. It is a minor thing, but seems such an easy fix. If I get one I will modify the kickstand first thing to make it easier to put down with a cable or a little extension that I can get at with my foot. 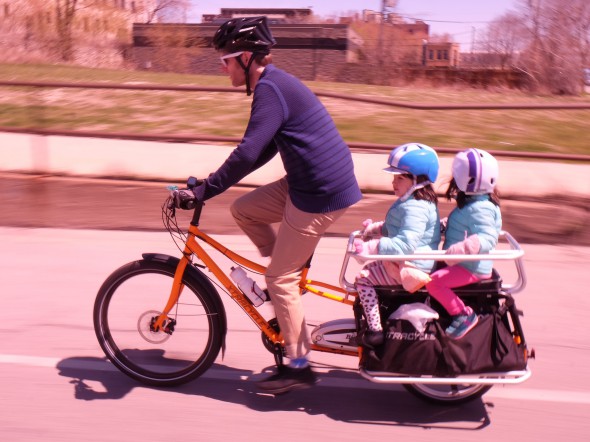 As far as handling goes, the Xtraycle rides like a normal bike, even loaded down with 80 lbs of dogs in the back. That is not true of bakfiets, some of which have a steep learning curve. In the end, the Xtracycle worked out so well that I am pretty much sold on it. The only reason I didn’t buy it is because I want to wait to test out the new Bosch electric assist Xtracycle 10E coming out later this summer. I don’t really need the assist to haul most loads for the distance I make on typical utility trips, but it would be really helpful to have that boost when using the bike for photo shoots. The price increase in the electric bike is a huge step up, but as often as I could use it for photos, I think it might be worth it. 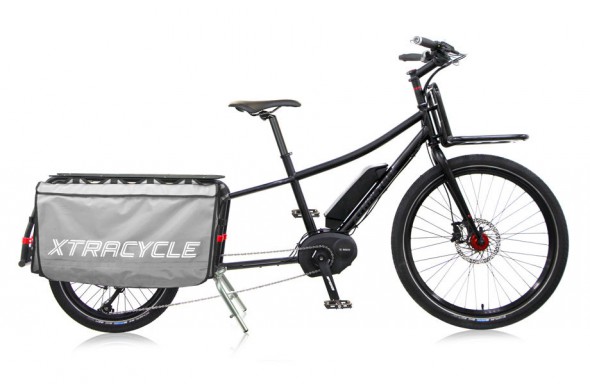 Although I never had more cargo than the Edgerunner could haul, I do like the front rack mounted to the frame on the new bike. Frame-mounted front racks are infinitely superior to fork mounted racks.

Coast In Bikes would give me a really great price on this demo Xtracycle, but I am curious enough about the electric assist that I want to wait to try it. Given I have to wait, I bet Tristan or Carolyn at Coast In Bikes will give you just as good a deal on this demo bike. I promise not to be mad if I decide I don’t need the e-assist and see you rolling along on a deal that I passed up!

Another reason I want to wait is to try the new Yuba Mundo Spicy Curry, which has a similar mid-drive electric assist from Currie Technologies. That bike is supposed to come out in June.  I don’t know where I will be able to test one though. In Milwaukee, Fyxation and Truly Spoken are Yuba dealers and they both give a Bike Fed discount, but I don’t know if either will stock one.

Stay tuned, as we hope to have at least three of the e-assist Xtracycles or Yubas to haul accordion players on this year’s Polish Moon Ride July 31st. 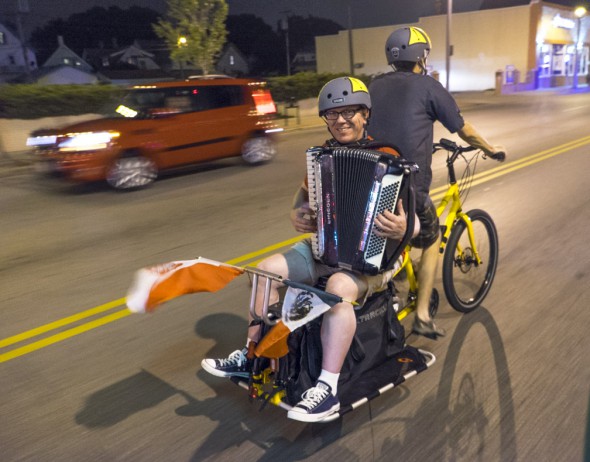 Oh yeah, the Xtracycle Edgerunner can haul accordion players too! Thanks Don Turner from bringing the Polka and Tristin Klein from Coast In Bikes for piloting the precious cargo. If you are an accordion player who wants to come on the next Polish Moon ride, contact me! You can never have too many accordion players, right? (Photo by Dave Schlawbowske)