It’s not every artist who offers cuts of grass-fed lamb after you attend the opening, but it all begins to makes sense when you understand the background of Rafael Francisco Salas. Salas grew up in small towns in Wisconsin, of Mexican and Caucasian descent, and his family still has a farm near Burnett, WI, just a ways west of Horicon Marsh, where those grass fed sheep are raised. On opening night of his current exhibition, jointly presented at the Portrait Society and Walker’s Point Gallery for the Arts, Salas later offered a “meat raffle” at the south side restaurant Cielito Linda, modeled on those held by Mexican Americans in rural areas.

So there is a certain amount of nostalgia to his work. The Portrait Society portion of his current exhibition includes an installation that romanticizes a Mexican roadhouse, “The Salas Eat,” intended to recreate the atmosphere of the Mexican-American restaurant his family owned in rural Wautoma, WI, about an hour north of Burnett.

“In these exhibits he examines the spaces between cultures and how a mixed racial identity can create a distance from both, leading to a kind of cultural isolation,” the Portrait Society’s exhibition notes explain. Salas also summons “the ghost of Tejano superstar Freddy Fender and the sacred lamb from Van Eyck’s Ghent Altarpiece as allegorical reflections on identity, landscape and as objects of devotion all at once.”

The artist’s website shows a quite varied body of work. Salas has had his work exhibited in New York City, San Diego, Boston, as well as many venues in the Midwest. He writes about art as a free lancer for the Milwaukee Journal Sentinel, which has called him “one of the best painters working in Wisconsin today,” and he has been an art professor at Ripon College since 2006. His impact on the Wisconsin art scene continues to grow. 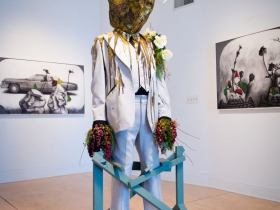 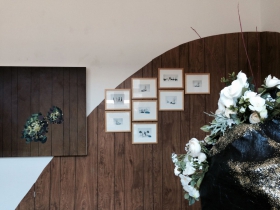 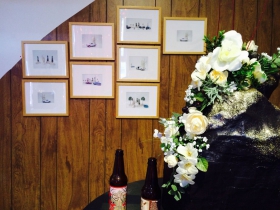 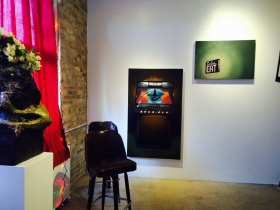 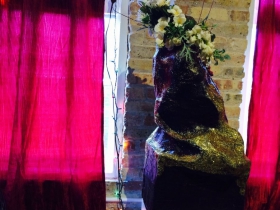 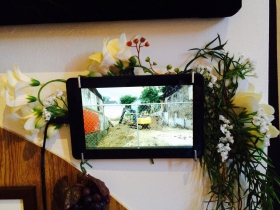