“I’m Not Thinking At All About Suicide”

The premise for Maria Bamford’s last stand-up special sounds like an April Fools’ joke. Instead of filming it in a fancy old theater or in a beloved comedy club, she shot it in the living room of her modest Eagle Rock, California home. The audience: just her parents. The kicker is that some of her best material is about her dysfunctional family, complete with impressions. This type of daring, surreal humor is signature Bamford.

Back in 2011 when I was living in Montreal I got the chance to interview Bamford before her Just for Laughs Festival run. At the time she claimed she was “trying to power down.” In a recent email exchange I asked her if she was still feeling that, or ramping up, or at some, er, happy medium.

“Right now, at this very moment, I have eaten a salad and I am sleepy. I would like to tip over. However, my assistant, Bradley, would see me do this and it would not be good for Company Spirit. I sleep a lot, but when I am awake, I am very happy/content/not thinking at all about suicide.”

Despite her history of bipolar disorder, anxiety and depression, it appears Bamford has had many reasons to be happy since the last time we spoke. She got engaged over the summer, she had a role in the fourth season of Arrested Development and on Louie, and she’s featured in a new documentary about the creative process called From Nothing, Something. But the most important accomplishment, in my opinion, is that her fearless, unique, hysterically honest and awkward sense of humor continues to slay crowds and convert common folk into bonafide Bamford fans.

On Wednesday night, April Fools’ Day, Bamford headlines Turner Hall Ballroom, her first significant show in town. The last time she was in Milwaukee she appeared on a public access TV show with two hilarious ladies, but she can’t remember the name of the program, after all, it was pre-Internet.

“The most I know of Milwaukee comes from Jackie Kashian‘s act, which involves a lot of time on the bus,” wrote Bamford.   Kashian is a South Milwaukee native and a regular opener for Bamford, though a headliner in her own right. While they’ve lived in Los Angeles for some time, both are Midwest girls at heart, as Bamford grew up in Duluth, Minnesota and started her career in Minneapolis. Since Kashian played Milwaukee somewhat recently Bamford decided to look for support acts in an unconventional way, through an open call for submissions via her Twitter account. She received so many responses that she cut it off after a day “due to GORGE CORNUCOPIA OF TALENTIA,” as she wrote on Twitter.

“I just thought it would make the shows more fun for me, to feel like I wasn’t alone in being nervous. Also it makes me feel useful, I can provide comedy jobs! I chose Rana May  and Becca O’Neal for the Milwaukee show,” she explained via email. “They are both very different, very smart and their writing and performance styles were inspiring to me. It was a bummer to just pick a few people because everyone was so good, but they stood out for me, which of course is frustratingly subjective and I just want to tell anyone who was bummed not to be picked that I KNOW NOTHING and YOU ARE THE CAPTAIN OF A SPACIOUS SHIP!”

Whenever Bamford is back in the Midwest she tends to feel a bit regretful for not being able to do everything and see all of her family and friends. She would love to be able to live full-time in California “attending to comedy arts AND live full-time in Bemidji making acrylic portraits of pets.” Maybe someday she’ll return to our part of country and settle for a simpler life, but her original brand of comedy remains in high demand. A recent Tweet suggests she may crack wise about Milwaukee. No matter what subjects Bamford covers, Wednesday is sure to be a special night for April fools.

Tickets for Maria Bamford’s performance at Turner Hall Ballroom are available on the Pabst Theater’s website. Doors are at 7pm, show starts at 8pm. For more Bamford, visit her website.

Still not sure? Here is Maria Bamford on Conan: 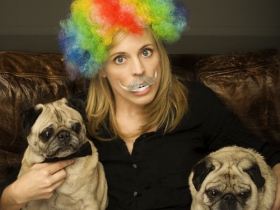 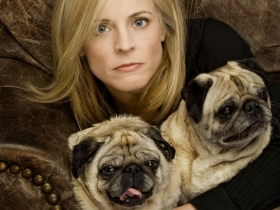 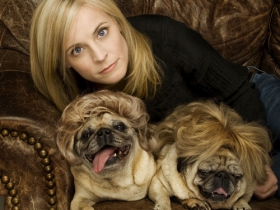