Owner Mike Eitel opened it in 1995, assuming he'd fail and go back to pursue his Ph.D. Bad prediction.

Mike Eitel established the Nomad World Pub in 1995. The doors officially opened on March 15, Eitel’s birthday. It’s been 20 years since the Nomad opened near the east end of Brady Street. The two-level, dimly lit pub, with its eclectic smattering of tribal masks, worldly artifacts, and fútbol paraphernalia hanging on the walls, has become a cultural hub for one of the busiest and most diverse areas of the city.

Eitel credits much of the Nomad’s success to luck, timing, and a little youthful ambivalence. “I did things when we opened that I wouldn’t do now,” he says, “I knew I could be poor and living out of a backpack again and it wouldn’t matter.”

In 1995, Eitel had stopped home in Milwaukee for what he says should have been a three-week visit. A recent graduate from UW-Madison, he had spent the last eight years studying one thing or another while traveling on a shoestring across Asia and parts of Europe. The next step was leaving Wisconsin for the University of California and a Ph.D. track in cultural geography. Those plans changed one morning when he walked into Brewed Café – then Brewed Awakenings – and struck up a conversation with philanthropist Julilly Kohler, who was working to revitalize a then-struggling Brady Street.

Kohler wanted someone to open a bar in a building she owned at 1401 E. Brady Street. Despite having no business experience, Eitel accepted, viewing it as an experiment before going back to school. He didn’t expect to be in business for long. “The plan back then was to start a business, run it into the ground, declare bankruptcy, and be back in school by fall,” he says.

He bought the building from Kohler the next year.

Eitel may have swapped academia for hospitality, but his continuing love for travel and foreign culture is apparent in every square inch of his steadily expanding “weary traveler” tavern, and in every venture he’s launched since.

The restaurants he helped open as part of the Lowlands Group, which he stepped down from active management last year – “I was burnt out…I didn’t want to be a 47-year-old heart attack [case]” – served regionally inspired comfort food, and names like Café Hollander, Café Bavaria, or Benelux are an obvious tribute to a gnawing travel bug.

The Nomad itself is directly influenced by Eitel’s experiences traveling abroad and living out of youth hostels – after you wandered into town and checked in at a hostel, you got your bearings at a local tavern; one was never far away. The taverns were community hubs where you could rub shoulders with fellow travelers and locals.

“That’s what [the Nomad] was inspired by,” he says. “I wanted to make this a haven for people that just blew in, that have no idea what to do that day or who to meet.”

Another direct influence for Eitel’s bar was the soccer culture, which has garnered it a massive and diverse clientele base.

“There are diverse communities of soccer fans in the city that most people don’t realize are there,” says Eitel. “There are nights you get two teams playing from two different countries, and suddenly we’re wall-to-wall with people from those countries. It’s amazing.”

In 2010 Eitel expanded the bar area into the building’s second floor, which until then had served as the office, and before that as Eitel’s sleeping quarters. The expansion raised the Nomad’s total capacity to 99 people.

“That was epic,” says Eitel with a wry smile, “but not as epic as last year when I supposedly became a racist and opened the Favela.” He punctuates the joke with a good-natured laugh.

The Nomad attracted national attention during last year’s World Cup with the infamous Brasil on Brady. As homage to the hosting country, the Nomad dressed up the neighboring vacant lot as a mock-up of a Brazilian ghetto, complete with hanging clotheslines and pastel paint jobs on the surrounding buildings. The month-long festival featured music, food, dancing, and drinks. It received a massively positive response, but not without criticism from some, which Eitel found ridiculous.

“Four years from now everything’s going to be Russian,” says Keanen Kopplin, the Nomad’s general manager, laughing. “People are really going to hate it when we paint the sickle and hammer everywhere.”

The Favela appeared in features by the BBC and NPR, and won an impassioned defense from Urban Milwaukee contributor Joey Grihalva. People from many different countries packed themselves into the little bar on Brady.

“We had this huge culture cluster. There’d be six or seven languages spoken at the bar. People would bring their own playlists so they could dance to the right music outside.”

By the time it was over, over 50,000 soccer fans had paid a visit. [Our photos captured 15,000 fans filling Brady Street for the USA vs Portugal World Cup match.]

“It was fun in a daily getting-your-ass-kicked kind of way,” Eitel reflects.

Now that he’s stepped away from active involvement in the Lowlands Group, Eitel has more time to focus on family. He recently returned from Costa Rica, where he married Bel Air co-owner Kristyn St. Denis.

The time he isn’t saving for his wife and kids, he’s spending on the Nomad. A number of new projects are in the works, he says. He’s always looking ahead to what the Nomad is going to be.

He recently bought and razed the Favela house, the abandoned building behind the bar that he painted for the World Cup. The empty space will soon be the site of a new expansion, though details are still in the planning stages. It’ll definitely include an outdoor patio, and visitors can expect appropriately worldly food. There are even rumblings about a beer garden. Details on the actual design, however, are a little sketchier.

“There are a lot of ideas, ranging from super simple to more Taj Mahal-like,” he says. “Working with the neighborhood and coming up with a design everyone’s happy about is critical.”

A few more projects might take the Nomad outside Milwaukee. Todd Smith, a friend of Eitel, opened another Nomad World Pub in Minneapolis. That pub celebrated its tenth year in business on St. Patrick’s Day. The neighborhood is comparably diverse, and the clientele is Eitel’s brand of soccer hooligan.

Nomad GM Kopplin will soon be moving to Miami to open another Nomad pub, once they’ve finished scouting locations. That city is home to a massive Latino population and a huge soccer market, but surprisingly few bars that embrace it like the Nomad does.

“I don’t see us turning into a chain or anything,” Eitel says. “I think what we’re trying to do is make connections to places that have a huge demand for what we have.” Surprisingly, he says, there are still cities lacking a neighborhood bar “that really goes all out on the global fanbase for soccer.”

Eitel says he’s supposedly retired, though you wouldn’t guess it from the way he talks. “I’m still a workaholic.”

He’s still playing with new ideas, some of which could take the Nomad in surprising directions. He’s playing with the idea of expanding the Nomad brand, moving beyond hospitality, maybe dabbling in retail, and offering travel opportunities. The idea is to give people the chance to get out and see the world beyond Milwaukee.

In other words, make good on the Nomad’s name.

“You need to be able to get out. That’s how this whole thing started.”

The anniversary celebration continues as the Nomad is offering 1995 throwback prices on draft, bottles, and rail drinks between 2 – 7 p.m. through the end of the month.

Photos from the Brasil on Brady 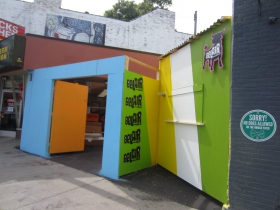 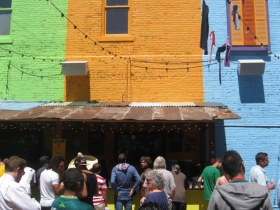 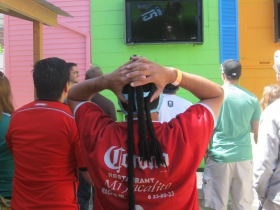 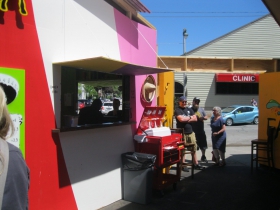