A New Solution for Prostitution? 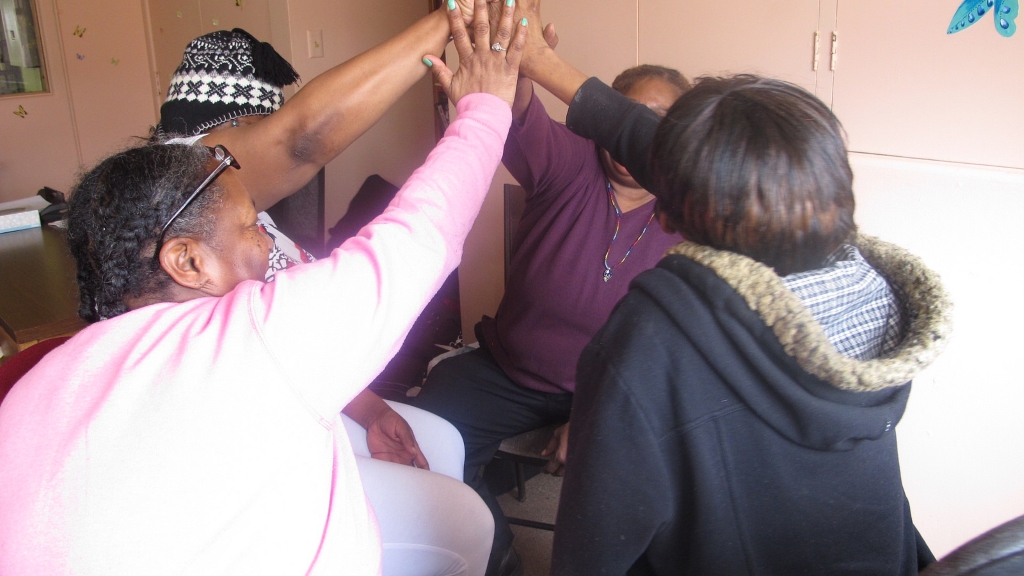 Several women participating in the Sisters Program celebrate their accomplishments and commitment to new goals. (Photo by Andrea Waxman)

When the Benedict Center Sisters Diversion Program opened its doors in 2011, prostitution seemed an inescapable rotating door both for the Washington Park neighborhood and the women involved: arrest, trial, incarceration, followed by a return to the street. Residents and police were frustrated, and prostitutes saw no way out.

Rather than facing a jail sentence, a person charged with prostitution in District 3 is presented with two options: receive a ticket and fine, or spend up to six months in the Sisters program.

When Washington Park resident Angela Pruitt met Sisters Program Director Donna Hieptas at a Washington Park Partners (WPP) safety meeting last year, she was concerned about “cleaning up” the neighborhood by ridding it of prostitution. Hieptas introduced the idea that the women are, in fact, Pruitt’s neighbors. Hieptas invited Pruitt to join a Sisters group session so she could come see the women as individuals and hear their stories. 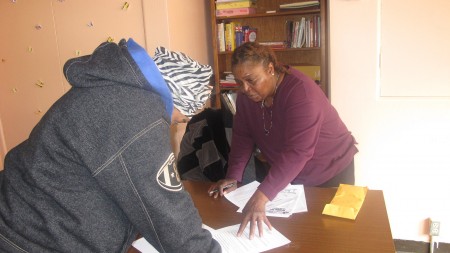 “Working with the women opened my eyes up to the fact that they’re not just prostitutes — they’re actually people,” Pruitt said. “They have the same needs that everybody else has. Just because they’re out there and they have a drug addiction, they can’t get the things they need. If we can get those things for them, they can make better choices in life. You have help; you just have to know that help is out there. “

Jeanne Geraci, executive director of the Benedict Center, said the center prioritizes healthier, safer lifestyles for the women, their families and communities. “Police have a different point of view and have traditional success markers that are different from a program like the Benedict Center.”

Historically police and prosecutors have been at odds with social workers about the most effective methods of addressing street prostitution and human trafficking. Traditional law enforcement methods typically focus on the end of the prostitution equation — penalizing participants.

Social workers, however, look to the beginning. Engagement in street prostitution frequently indicates abuse in relationships outside of the sex trade, usually at the hands of a supposed protector or guardian. Social workers seek to address the underlying trauma and instill skills that lead women to a life outside of prostitution, according to the Benedict Center.

The Sisters Program offers morning group sessions addressing a range of issues including healthy relationships, anger management, past trauma and day-to-day concerns. In the afternoon, women drop in for support groups and meetings with case managers, safety planning and referrals to other services. They may also rest in a secure environment and eat a meal provided by Marquette University’s Campus Kitchen Project.

The Sisters Program does not require drug testing or a commitment to stay off the street. Rather than dictating a particular treatment method, it seeks to build trust by addressing the individual needs of the participants.

Hieptas emphasized that building a long-term relationship and demonstrating consistency between words and actions are critical for the program’s success.

“When you’re working Lisbon or working North Avenue, you don’t see hope for change,” Hieptas added. “Once women start feeling valued, they can look and start to see things about themselves that they should be proud of.”

Shavon Pope and Genene Williams have been outreach workers for the Sisters Program for nearly five years. Knocking on doors to remind former participants that they are always welcome and approaching women engaging in prostitution, Pope and Williams create a bridge between the street and the Benedict Center.

“We have to start by forming a bond with the ladies because they’re not open immediately to new people, new faces. It takes a while to form a bond of trust and we just keep plugging away at it,” Pope explained. “Every time we see them we stop them, talk to them, give them hygiene products. We just keep going at it until we wear them down,” she said, laughing. 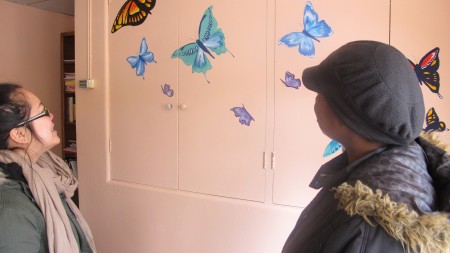 Their commitment and consistency have paid off. “The people here reaching out to us continually, over and over, that gives us hope,” said Sarah, who added that the program also offers “somewhere to come and eat and be safe and warm and sleep. Over time you start to develop a relationship and develop hope for something different in your life.”

Grasping the hand of a fellow Sisters Program member in her own, Sarah wondered aloud where she would have been without it. “Through this program I’ve made a lot of amazing changes in my life and I’m very grateful for it. If it had never happened to me, would I even be here, I mean, on this earth?”

Since 2013, the outreach workers have connected with 187 women a total of 868 times. The Benedict Center believes that the repeated connections indicate trust and a willingness to seek services from the program. Though numbers are preliminary, researchers from the Medical College of Wisconsin found that 71 percent of women who were arrested for prostitution and chose to participate in the program remained for more than the mandatory six months. While exiting prostitution is the ultimate goal, the program considers this a sign of success.

The early success of the Benedict Center’s Sisters Diversion Program is particularly notable because it is currently the only program in the nation working with police and a community prosecution unit to provide treatment for women charged with prostitution.

Community Prosecutor Chris Ladwig described the Sisters Program as a “unique and innovative program that other cities are trying to replicate…” He noted, “This is a model for the entire criminal justice system. … This is an example we can [look to] for drug use, domestic violence [and] juvenile issues.”

With support from a new $250,000 grant from the Healthier Wisconsin Partnership Program, the Sisters Diversion Program hopes to expand in the coming year. Hieptas and Geraci believe the award is a unique opportunity to empower leaders. The Benedict Center plans to create “leadership circles” where Sisters Program participants can share ideas and insight to facilitate thoughtful growth.

The theme of development and transformation is evident throughout the program space. A wall in Hieptas’ office bears a plaque that reads, “Don’t always believe what you think.” In the outreach workers’ office, painted butterflies adorn the peach-colored walls.

“The women are in a metamorphosis,” explained Pope. “Out of the cocoon emerges a beautiful creature.”

2 thoughts on “A New Solution for Prostitution?”