Farewell to a Lovely Winter

Spring is welcome, but I had so many wonderful experiences on fat bikes that I'll remember this winter fondly.

By Dave Schlabowske, Bike Federation of Wisconsin - Mar 13th, 2015 03:00 pm
Get a daily rundown of the top stories on Urban Milwaukee 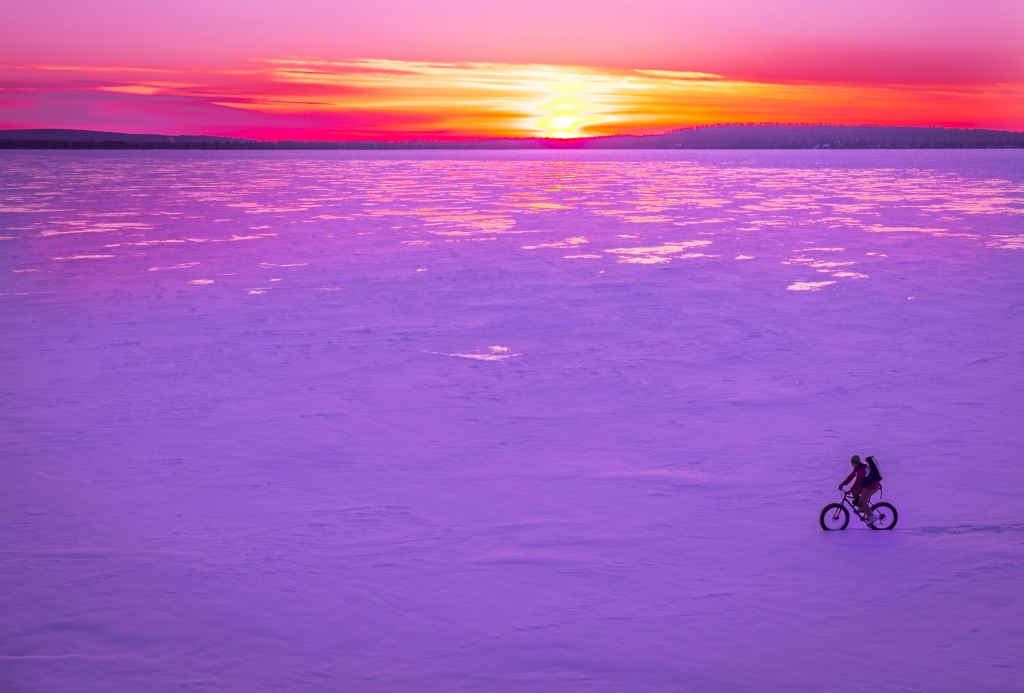 The sun sets on winter. Here Julian Kegel rides a Badger Bikes Fattywampus across the frozen waters of Lake Superior off the tip of Roman’s Point, near Cornucopia.

I am happy to greet Spring and look forward to riding skinny tires in short sleeves, but I can honestly say that I had a blast riding this winter. I owe all my fun to the advent of fat bikes. While I love skiing and snowboarding, Wisconsin winters do not always provide dependable, good snow conditions for either. With skiing, you have to check Skinnyski.com or check snow reports for places that make their own. Fat bikes are a blast to ride no matter what the conditions are. 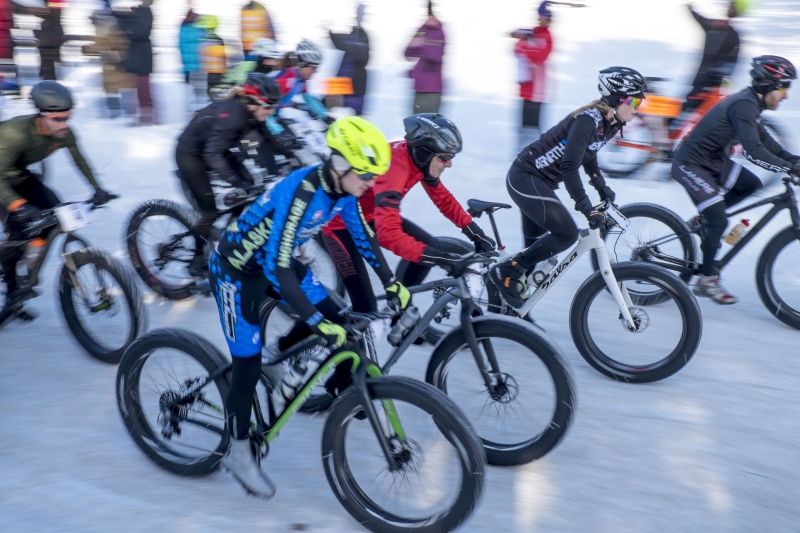 Will Ross, Ned Overend and the other top racers fight for the hole shot.

To close out the winter, last weekend I squeezed in a trip to the 3rd Annual Fat Bike Birkie and Wisconsin’s North Coast to ride the ice formations along the shore of the Bayfield Peninsula on Lake Superior. I was fortunate enough to tag along with Wheel & Sprocket’s Badger Bikes crew who sponsored the 47K Fat Bike Birkie. 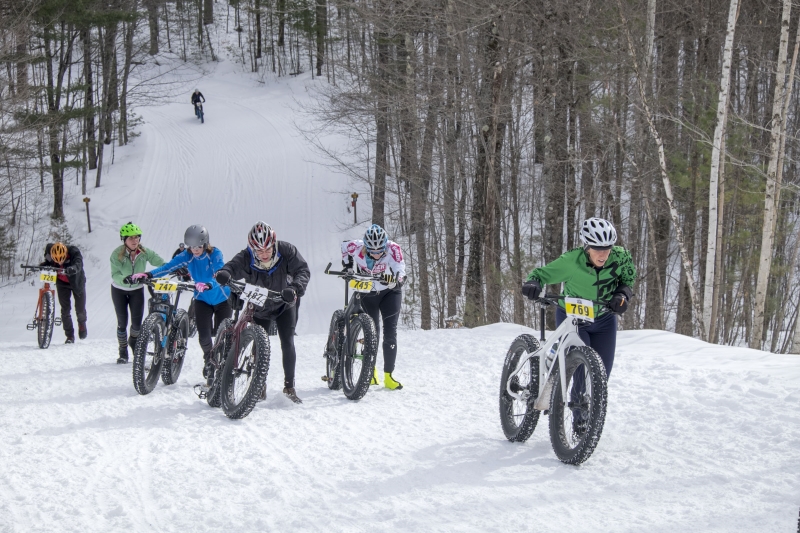 Those power line rollers do take a toll on the legs, and with temperatures in the 40s, they got a bit greasy by the end of the day.

This year 25-year-old 9:ZERO:7 team rider Will Ross (a biker from Alaska) edged out 59-year-old Ned Overend of Durango, Colo., for the overall win. Ned crashed in the closing kilometers, but he said he didn’t think he would have been able to hold off Ross.

“I finished  in second place, 20 seconds behind Will, who finished second to me last year at this event. I was fully blown,” said Overend. “I was not going to catch him. He was stronger today.

“This is a great course with non-stop hills and tight turns. The snow was getting soft later in the race causing a lot of crashes, including mine about a mile from the finish. I was delirious trying to stay up with Will. The Birkie has grown from 500 racers last year to over 800 this year, making it the biggest Fat Bike event in our solar system. There must be something in the frozen water in the Midwest.”

At 53, I can’t say I “raced” but I did ride the full 47 Kilometers and had a great time doing it. The never-ending hills are a challenge, but the ear-to-ear grin on every downhill make the climbs worth the effort. Whether you are a contender for the podium or just someone who wants to ride the famed Birkie course, you owe it to yourself to head to the Chequamegon Area Mountain Bike trails by Cable and Hayward next year to check it out. They even have a short course. To find out more about the race, check out the great coverage of the race at Fat-Bike.com. 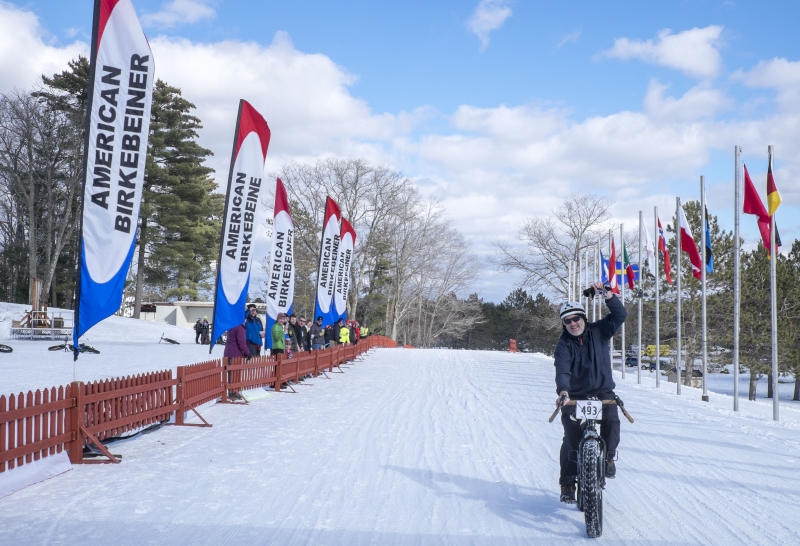 The Friday before the race, Julian Kegel and the rest of the Badger Bikes crew and I headed up to the Bayfield Peninsula to ride along the shore of Lake Superior to see the ice formations. It is not legal to ride in the Apostle Islands National Lakeshore Park area, but there are plenty of jaw-dropping caves and frozen waterfalls where fat bikes are OK. 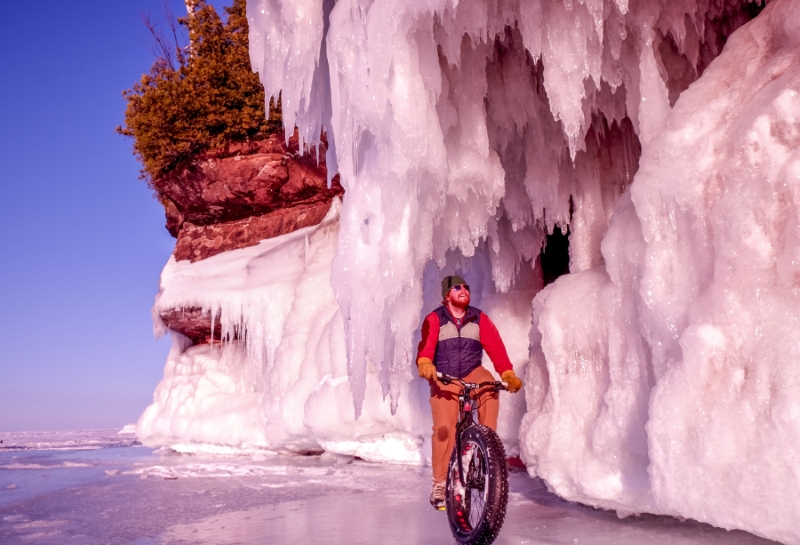 Julian Kegel off the coast of Roman’s Point near Cornucopia. 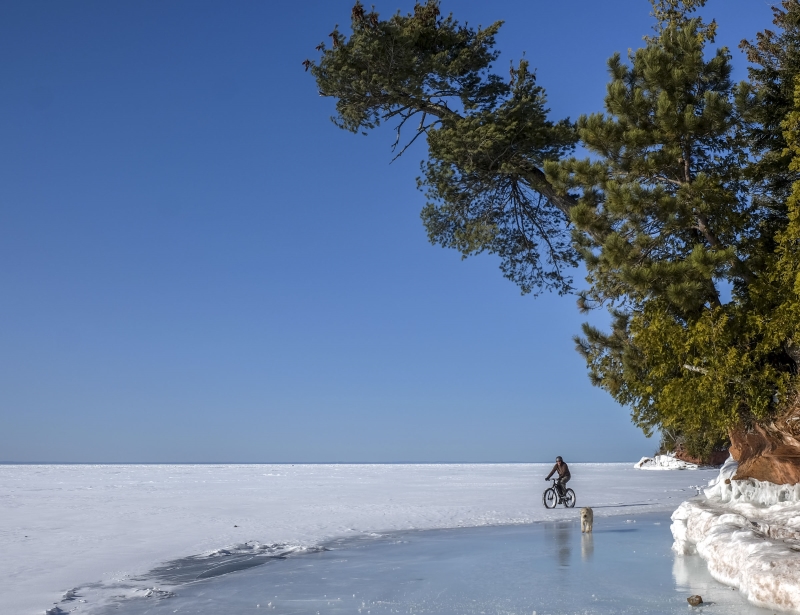 The scenery along the coast of Lake Superior is spectacular any time of year, but riding studded tires on frozen water makes it a little more special. Teddy the dog brought his own studs.

I have been riding around Bayfield three times now, so I know a few locations that have cool caves that are great, perfectly legal places to get to by fat bike. Of course ice conditions vary, so you have to be careful, just like if you were ice fishing. If you are unsure of ice thickness, check with the locals. 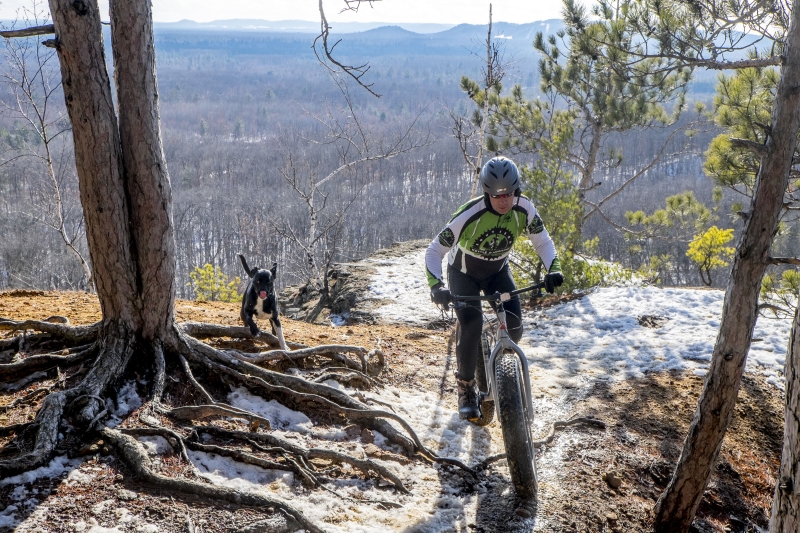 Rasco and Marty Tank coming back from a scenic overlook at Levis.

Sunday, on our way back we stopped at the Levis Mounds Trails to ride the 20 miles of groomed single track the volunteers there maintain all winter. Levis has some of the most incredible vistas at any of the state’s mountain bike trails. It’s a county park, so you have to pay a fee to ride there even if you have a state trail pass, but it is well worth it! 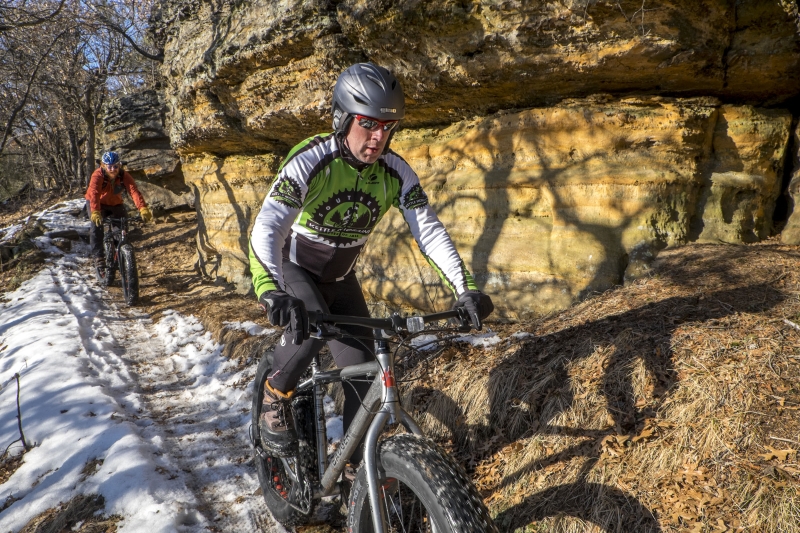 The snow is probably all melted at Levis by now, so check their website for trail conditions before you ride there.

So I’m saying goodbye to winter with this last wonderful video from John Murphy and the North Coast Cycling Association, who are probably still having their weekend coffee rides on the ice road to Madeline Island.