MCT staging of Fugard play is packed with moral and theatrical lessons.

For more than 50 years Athol Fugard’s fame has been tied to his reputation as the white South African playwright whose pinpoint morality tales and insights into human behavior helped crush apartheid.

As true as that image was, it also simplified Fugard’s deep dramatic gift. His dialogue and structural expertise place him in the front ranks, an artistic skill that still shines even after apartheid ended in his homeland. In his newer plays, Fugard has matured in assurance and introspection to guarantee audiences an authoritative mixture of character interplay and expanding nature-based symbolism. He is the great sculptor of the intimate stage event, chiseling out new understandings of the human condition.

Such is The Train Driver, a meeting of two strangers in a remote squatters’ graveyard outside Port Elizabeth that contrasts two reactions to life, death, nature and neuroses.

To carry us through the insightful duet, the Milwaukee Chamber Theatre through March 15 is relying on accomplished and magnetic actors. Michael Torrey plays Simon, the uneducated elderly worker who routinely marks the graves of the unknown with hubcaps and knickknacks. David Daniel plays the intruder Roelf, the crazed belligerent and dismissively superior white man seeking the bodies of the mother and child he unwittingly killed when they failed to get off the tracks as his engine hurtled toward them.

Simon is the country mouse who makes the subjugated routine of digging and eating seem preferable – for a while, at least — to the torment suffered by the visiting city mouse. This is the rustic who quietly listens and lands punches with casual remarks – and in the role Torrey proves the theater adage that attention is drawn to the stiller waters and those waters had better be consistently believable. He flaunts little technique while embodying a ton of it to become the audience’s eyes.

Roelf is literally the play’s driver – a working-class Hamlet raging against God and the fates that turned his civilized complacency to mush, unleashing invective and crude humor as he searches without quite knowing why for the bodies of the black mother and baby he inadvertently killed. In this part Daniel stuns us often with remarkable vocal power and exactness of interpretation. Those abilities entertain us with laughter and sympathy. Only in key moments does the actor put us into the character’s confused head, though the play’s psychology requires us to feel the change and how it was internally reached — and at times we could use more to help us emotionally as well as intellectually understand what is happening.

In the face of such strong actors, director C. Michael Wright mainly stays out of their way – an understandable choice since Fugard writes plays for actors to respond to each other. But even such fine actors with a strong script needed a little more help.

Wright mainly lends guidance with orchestrated and absorbing technical elements. Set designer Lisa Schlenker’s dirt and stone sandbox of a graveyard is both simple and symbolic; Victoria Delorio’s sound design rustles our mind; lighting designer Stephen Roy White lets the structure of frequent blackouts occur without embellishment or stagey comment. All that helps us imagine and almost visualize the mangy dogs of the two-legged and four-legged variety hovering in the shadows. Also hovering for us to contemplate are Fugard’s insights into the heritage of class structure and the consequences of how mankind deals with anger, acceptance and mortality. 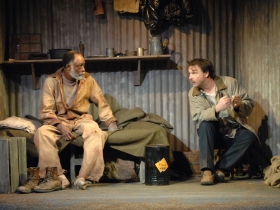 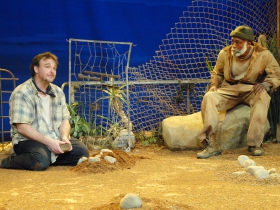 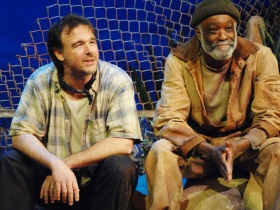