Great Storytelling in The Amish Project

Storytelling is finally being recognized as a powerhouse of internal education and empathy. In various ways it is being adapted by physicians, businesses, justice experts and other professionals. Yet society at large doesn’t publicize the healing power of storytelling that guides children into creativity and purges adult souls of despair. That job has fallen to theater, the most capable platform for the sophisticated tools employed in storytelling, often correcting the stereotypes that dominate our media.

The latest, engrossing example is The Amish Project through March 22 at the Milwaukee Rep’s Stiemke Studio.

In the real event a mere nine years ago in Nickel Mines, Pa., a local milkman invaded a small Amish schoolhouse and committed suicide after shooting 10 schoolgirls, killing five outright, execution style.  Was his aim hostage taking? Sexual fantasy? Envy of the innocent? Television exploded with such speculation.

The Amish community not only forgave the non-Amish gunman but gave solace and food to his widow and two children. The nation and the media again went through paroxysms of confusion – how noble are the Amish!  Or, what freaks to encourage future dementia with kindness! How sicko this killer! Or, how unnatural for families to forgive the murderer of their babies! Mostly, give us an answer, comfort us with a simple answer!

What playwright Jessica Dickey offers is deliberately fictionalized, unfolded in shards and sweeping in language and nonstop change of moods and opinions. With one actress in one Amish bonnet flashing interior thoughts of seven characters and flitting about a bare schoolhouse shell, Dickey explores not just Amish, but American society, with more laughs than you would expect and more self-recognition that you thought possible.

You need know nothing about the actual shooting to be mesmerized. It actually helps more to have watched how TV sells cosmetics and political posturing — and we all have, just as we also understand the giddy joy in life of children who don’t know they are doomed.

It also helps to know how society leans on racial and religious clichés, lumping all the Amish into one boat, stereotyping all pregnant Hispanic teenagers as ignorants unlikely to be touched by Shakespeare or St. Francis. The playwright knows many patrons will feel superior to the angry matron shopper hurling invective at the gunman’s widow — only to be brought up short and rather guiltily when she says any decent Christian American would be enraged by a woman who wedded and bedded such an ogre.

Rather than wallow in grief, Dickey plunges us past and through a freaky deranged event into more complex human DNA where neither optimism nor despair is easy.

The Amish Project continues a surprising pattern of local theater groups using the most difficult and least commercial mold to bring such storytelling to life – the lone actor play.

Historically, patrons run for the exits, not expecting that one actor alone on stage will make them eager to dip inside familiar events and multiple people, can so engage our minds to awaken the tear ducts, can earn the impulsive standing ovation rather than the automatic “stand and cheer” that has become a ritual for touring ensembles.

Of course, the labor cost factor alone encourages the solo actor to create a showcase and companies to commission sometimes shaky solo plays. The wonder is we are getting so many good ones recently.

There are some connections as well as differences in the two current examples from off-Broadway now on city boards, The Amish Project and the previously reviewed No Child, running through Feb. 22 at Next Act.

Both were showcases for actress-playwrights that were so well written they have had future life. With Amish Project in 2009 Dickey earned raves from New York critics who rightly praised the quality of the language and her avoidance of what could have been exploitation of an American lone wolf shooting spree.

The raves could be echoed in Milwaukee with a twist, as Dickey’s role is handled with interpretive freshness and individuality by Rep veteran Deborah Staples, who amazingly was not the first choice here despite her acclaimed experience in one-person plays. She took over when a biking trail tragedy last September killed noted Chicago actress Molly Glynn, which Urban Milwaukee also wrote about.

The actresses are not twins in either manner or methods  – I have seen and admired both. But I have never before seen Staples so superbly blend her remarkable vocal flexibility and physical grace to sweep through multiple personalities moment by moment.

Usually actors feel successful at distracting us with their nimble skills. But sometimes the skill merges back into the central concept. That’s what Staples does. She turns what could have been sketches into a fascinating emotional continuation that reminds the attentive of the range rather than limitations of humanity. Just when you suspect the playwright might want to settle for feel-good sentiment and message, the actress pushes the edges of doubt and rage to separate the characterizations from each other.  I do have problems with the finale, but the journey there kept me open.

While No Child fabricated out of real classroom experience, Amish Project is unabashed inventive fiction. It imagines through one horrific event seven people living and dead along with others – including the audience — revealed with glances and gestures. Mini-monologues rope in those national living room knee-jerkers who invented their own versions of what happened and what the Amish are.

Afterward, you may marvel at the proficiency of the actress, but Staples never indulges – she just gets us involved. She can sketch the outside of the characters at rapid speed but reaches always for how to tell us about the insides. It takes extraordinary focus on the arts of storytelling to create this constant shifting from six-year-old Velda and her older fellow victim to the sympathetic professor handling the media to the gunman himself to his tortured wife, to the bile-ridden shopper to the flamboyant Hispanic cashier. Only toward the end with the hanging of garments or the hints of a magic word does the play push too hard on what has already been established through artistry. After so intelligently putting humanity in the docket, it should have rested its case.

Director Leda Hoffmann guides and relies on the actress, and subtly (though not always subtly enough) on the eerie music of Victoria Deiorio and lighting punctuations of Jason Fassl. The set and arrangement of the theater space also reflect a shrewd, tactful collaboration of technical elements.

Staples could have settled for simply showing her versatility. That alone would have amazed us. And Hoffmann as director could have goosed the emotions, but she believed in the storytelling to vibrate the human spirit.  Would that all society did. 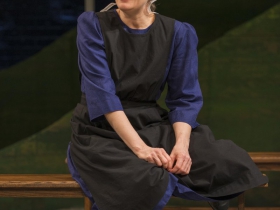 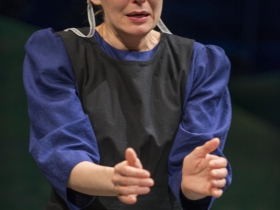 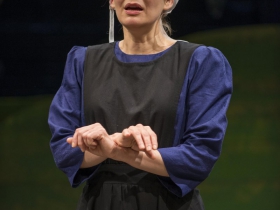