New test causes big drop in students passing it in Wisconsin and nationally. 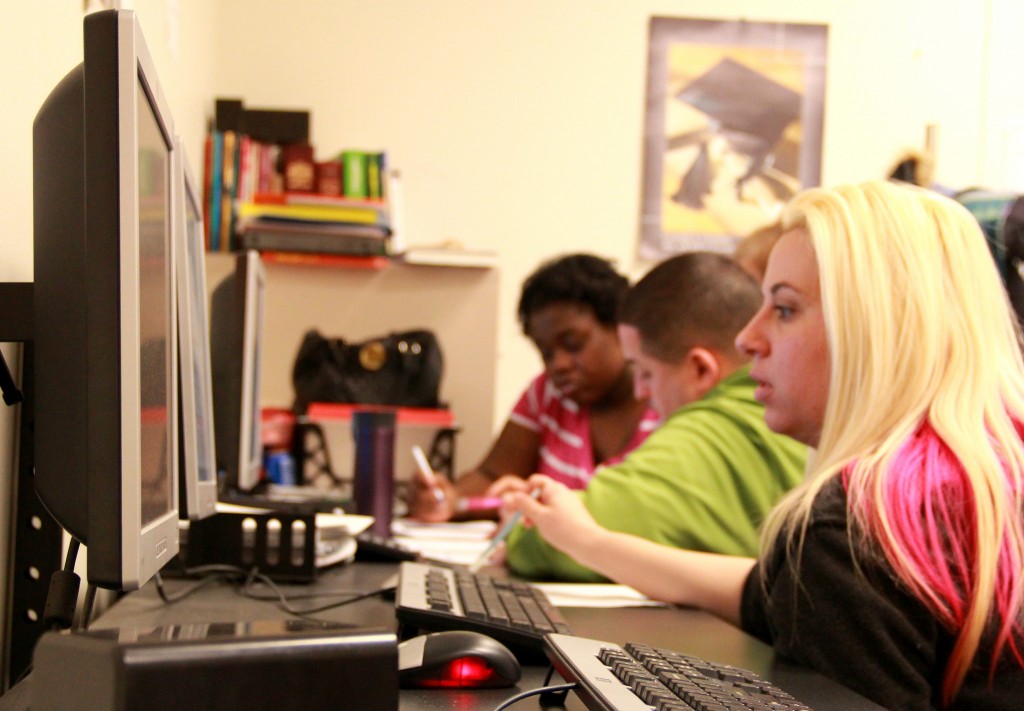 Keisha Gathright (left), Manuel Saldivar (center) and Becky Zingsheim (right) prepare for the GED in a class at UMOS. (Photo by Molly Rippinger)

During 2014, the first year of the newly-structured GED (General Educational Development) test, about 88 percent fewer students passed the exam at United Migrant Opportunities Service (UMOS), a social services organization in Milwaukee, than they did in 2013, according to testing data compiled by Pearson, a test provider.

The new GED, which now aligns with the more difficult Common Core State Standards, tests reasoning through language arts, mathematical reasoning, science and social studies. Students are expected to have a firm understanding of mathematical problem solving, the sciences, civics and government, economics and geography along with the ability to read closely, write clearly and understand written text.

Academically, the restructured sections have been challenging for test-takers, according to instructors.

UMOS student Maritza Santiago, 29, who took the older version of the exam, noted the stark differences.

“It’s much harder and there’s a lot more writing,” she said.

Instructors have also had trouble transitioning to the new curriculum, which was developed by the American Council on Education (ACE) and Pearson VUE, a national testing company.

“It was difficult to understand what the new changes were and what materials we needed,” said Madrigal-Alvarez.

She said UMOS instructors purchased the only two teaching manuals that were available when the GED was released in the hopes of gaining a better grasp of the exam. 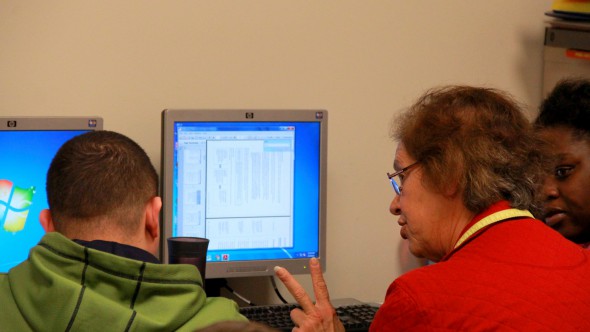 “We didn’t know what the new test was going to be like,” said Carole Jameson, a part-time GED instructor at UMOS. “We didn’t have a clue as to what we were supposed to be teaching the students.”

Jake Gorges, learning lab manager at the YWCA of Southeastern Wisconsin, said the students have voiced their frustration with the new exam.

“A lot of people are coming off and saying, ‘This is no good.’ But, this is all we have at this point,” he said. “There’s no question about the difficulty of this test, but when people graduate they are career and college ready.”

YWCA officials have created preparation programs that teach students the fundamental skills in subjects that are critical to the GED.

Despite the increase in rigor, test-takers are still pursuing a high school equivalency diploma in order to get higher-paying jobs or to pursue higher education, according to Tony Tsai, education manager at UMOS.

“I understand the need to prepare the candidates for the workforce,” Tsai said. “If the GED continues to be an alternative for high school drop outs, then there is no reason to make it more difficult than high school comprehension.”

Data from Pearson shows that UMOS students are not the only ones grappling to meet the more rigorous standards. Of the 240 people in Milwaukee who completed the GED in 2014, only 49 percent passed. As of January, there were 874 individuals registered to take the GED in Milwaukee.

Carolyn Spain, chief examiner and the director of judicial affairs and assessment at Milwaukee Area Technical College (MATC), attributed the low GED turnout in 2014 to the way MATC and other pre-college programs pushed for people to take the old test while it was still available.

“We did such a great job scaring people about the test that now we need to ‘un-scare’ them,” she said.

According to data from ACE, it is normal for the number of test scores to drop in the year following the introduction of a new GED. After the test was changed in 2002, national participation dropped to about 550,000 from the 2001 mark of 1.1 million test-takers. In 2003, the numbers returned to the more expected averages of 775,000 to 800,000.

“Back when we had the old paper test, we would test everyday and have about 15 to 20 people fill those seats,” said Spain. “Now we have a lot less people coming in to test.”

Aside from the elevated academic standards, the GED’s new computerized formatting has challenged some test-takers. A benefit of the electronic format is that it allows students to have instant feedback detailing where they excelled and need to improve. But, according to the UMOS instructors, some students are uncomfortable taking a computer-based test.

“It never would have occurred to me that students might have trouble at the keyboard,” said Jameson, who has had to help students with basic computer skills, such as typing or using the mouse.

“Before students take the test they need to have sufficient PC and keyboarding skills,” said Tsai said. “Otherwise, the test is a huge challenge.”

Another hurdle is that some students cannot access the online materials at home, making studying outside of the classroom nearly impossible.

“I have some worksheets that I can give them, but I think without access to a computer it’s very difficult,” said Jameson.

Madrigal-Alvarez added that some of her students have computers, but limited access to the Internet. For those who do have access, the online resources make preparing for the test easier.

“Studying on the GED website is great because it tells you what you need to work on to pass,” said Santiago. “We didn’t have that before when it was all on paper.”

Preparation time for the new GED is another challenge, varying with each student.

“It all depends on how often people come into the lab and do work and what their skill set is at beforehand,” said Gorges. “I believe people should look at this as a part-time job and it’s going to take multiple months.”

“If everyone is putting out 100 percent, they could do it a semester, but they have a real life,” said Jameson. “I have people doing third-shift jobs and then they come to school first thing in the morning.”

Other obstacles have included the method of payment, which now requires students to pay online.

“The payment method is an additional hurdle,” Tsai said. “Most students don’t have a credit or debit card.”

To help students, UMOS worked with Pearson to establish a billing agreement that allows them to accept money orders.

“This is just not on their radar,” Jameson said. “They work with a food stamp card and the cash they have in their pocket.”

Not wanting the method of payment to deter her students, Jameson has even offered to use her own credit card for students who want to take a practice exam but only have cash.

In Wisconsin the GED costs $33.75 per section, making the full examination $150 including the $15 registration fee. The old GED was $65 for the full examination. Other added expenses include practice tests, which are $6, and exam retakes that are $30 each.

“It’s a staggering amount for people who may be on fixed incomes,” Gorges said.

There are programs that help students afford the test, such as Wisconsin Works (W-2), which reduces the exam cost to $35 and retakes to $10 each.

“It’s a big help,” said UMOS student Bernice Aviles, who explained that paying the full price would be a burden to her tight budget.

“I’ve been struggling since I got out of high school because I was a dropout. Every job now requires a GED, or else you’re stuck getting paid minimum wage. It’s hard, especially if you have a family,” she said.

During February, the cost of practice tests has been reduced from $6 to $1. A free practice test is also available, but it does not generate a score.

UMOS is working to help their students afford the GED through a recently formed LULAC (League of United Latin American Citizens) council, which will have a fund specifically for the exam.

Cindy Steffens, a student at UMOS, believes people should not be afraid of the new GED standards.

Gorges shares Steffens optimism, saying that even if students fail the GED, the skills they acquired will translate to other facets of life.

“Prep programs will never make someone worse at living,” he said. “If people come in, prep and become better at reading, then they are going to read better in all aspects of their life. They simply can’t get less academic.”