Ashley Furniture gets $6.7 million from job agency, has federal fines for more than 1,000 worker injuries.

By Madeleine Behr, Wisconsin Center for Investigative Journalism - Feb 8th, 2015 09:12 am
Get a daily rundown of the top stories on Urban Milwaukee 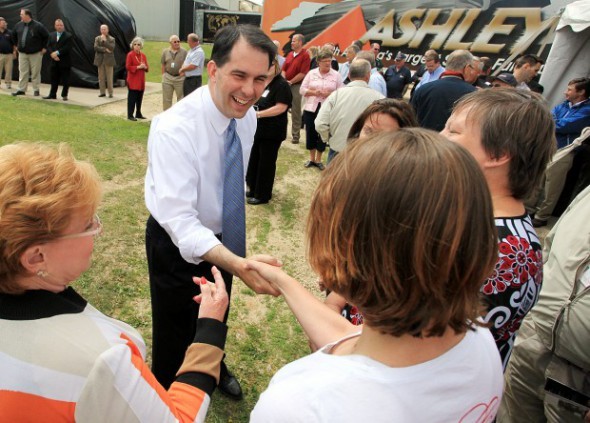 A Wisconsin-based furniture company facing nearly $1.8 million in federal fines for workplace safety violations stands to receive up to $6.7 million in tax credits from the state’s top job creation agency.

Under two contracts awarded in 2012 and 2013, Ashley Furniture is eligible for up to $735,000 in tax credits from the Wisconsin Economic Development Corporation for creating 243 jobs at two state manufacturing plants. The privately held company, which bills itself as “the largest manufacturer of furniture in the world,” has already collected $260,040 in tax credits under these contracts, according to the online WEDC database.

Ashley is also pursuing $6 million in tax credits, for which the WEDC board has given preliminary approval, to proceed with a $35 million expansion of its headquarters in Arcadia. The contract would keep 1,924 jobs in Wisconsin but not require the company to create any new jobs.

Ashley said in a statement to the Wisconsin Center for Investigative Journalism that the project for $6 million in tax credits is pending, with a final decision expected in the next 90 days.

Ashley is facing fines for more than 1,000 work-related injuries over a three-and-a-half-year period at the company’s Arcadia plant in Trempealeau County, according to a statement released Monday by OSHA.

Under WEDC’s standard contract for economic development tax credits, recipients must be “in compliance with all laws, regulations, ordinances and orders of public authorities applicable to it.” But there are no specific provisions regarding workplace safety.

Assembly Minority Leader Peter Barca, D-Kenosha, a WEDC board member, said he was “deeply concerned” about the OSHA citations. He suggested that WEDC needs to do more to hold companies with poor safety records accountable.

The injuries reported by OSHA included one worker losing three fingers in July 2014.

“Ashley Furniture has created a culture that values production and profit over worker safety, and employees are paying the price,” U.S. Secretary of Labor Thomas Perez said in the statement.

Ashley refutes the allegations, saying in a statement it “strongly disagrees with each and every one of the agency’s assertions and believes the proposed penalties are grossly inappropriate and overzealous.”

Steve Ziegeweid, director of health and safety at Ashley, touted a 14 percent decrease in incident rate over the past five years and called employee safety “an absolute priority.”

The company, according to Forbes, had annual revenue of $3.85 billion through October 2014.

OSHA, part of the U.S. Department of Labor, identified 1,037 workplace injuries at the Arcadia plant from Jan. 1, 2011 to July 31, 2014, spokesman Scott Allen said. The company was cited for 38 violations, including 12 “willful violations,” 12 “repeated violations” and 14 “serious violations,” and faces fines totaling $1,766,000. According to OSHA, willful violations are those committed with “intentional, knowing or voluntary disregard” for the law.

Subsequently, the company has been placed on the Severe Violator Enforcement Program “for failure to address these safety hazards.” 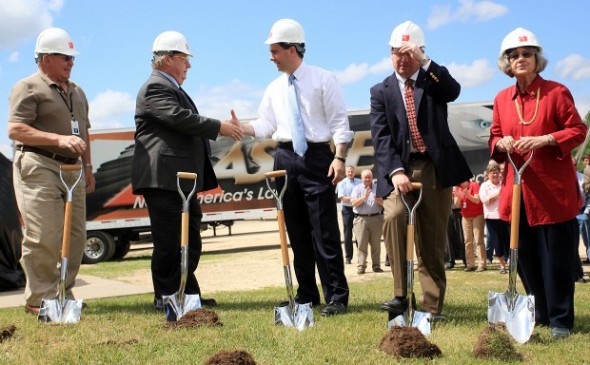 City and county officials, as well as Gov. Scott Walker, take turns breaking ground at Ashley’s Whitehall expansion in 2012. The company stands to receive $675,000 for adding and retaining jobs at this plant. Photo by Andrew Link / Winona Daily News.

“Private companies that receive economic development assistance from the state should be held to high standards — especially when it comes to worker safety,” WEDC board member Barca said in an email. “WEDC needs to do everything possible to establish standards to ensure companies are complying with state and national laws and develop clawback provisions when any company has serious violations of the law.”

Mark Maley, spokesman for the WEDC, did not respond to repeated requests for information about whether the state’s contracts with Ashley might be affected by the OSHA citations.

WEDC’s pending $6 million contract with Ashley is for an Enterprise Zone Tax Credit, awarded in areas the state deems to be economically distressed. WEDC uses the unemployment rate, median household income and other measures to designate certain areas as enterprise zones. The company then must hire or retain employees who live in that zone.

Ashley has also been awarded two contracts, for $675,000 and $60,000, through WEDC’s Economic Development Tax Credit program.

The company can receive partial credits for meeting these goals in part.

Ashley had created just 80 jobs as of its last reporting, according to the WEDC database. The company will report its final job count for 2014 in March. WEDC must then verify that the jobs were created.

In 2014, WEDC dispersed more than $156 million in financial assistance, with $79.1 million distributed as tax credits.

WEDC economic development tax credits can be used to offset Wisconsin income or franchise taxes, standard contracts state. If the tax credit exceeds taxes due, the unused balance can be carried forward for up to 15 years.

The nonprofit Wisconsin Center for Investigative Journalism (www.WisconsinWatch.org) collaborates with Wisconsin Public Radio, Wisconsin Public Television, other news media and the UW-Madison School of Journalism and Mass Communication. All works created, published, posted or disseminated by the Center do not necessarily reflect the views or opinions of UW-Madison or any of its affiliates.
Categories: Business, Politics, Wisconsin Center for Investigative Journalism