Get Out of the Road!

Why do automobile drivers yell at legal bikers and pedestrians? Probing this ugly form of road rage.

By Dave Schlabowske, Bike Federation of Wisconsin - Jan 2nd, 2015 01:15 pm
Get a daily rundown of the top stories on Urban Milwaukee 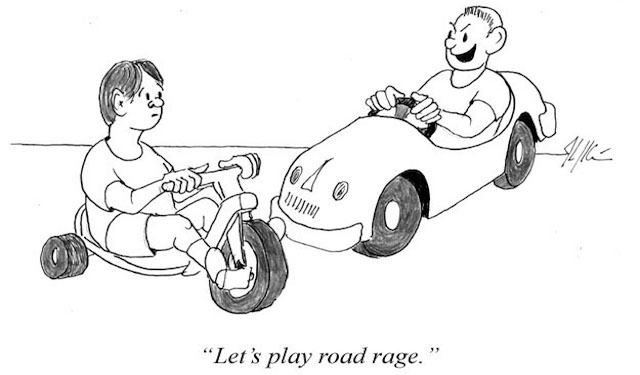 I’m just coming down from all the love I get riding around on the Santa Cycle Rampage, so it has been particularly distressing to be the victim of rage several times recently. In each incident, the angry person behind the wheel screamed for me to get out of the road and honked.

The first incident happened while riding home from work on Monday around 5 p.m. I was riding north on Hawley Road, in the parking lane mind you, when a woman drove past me, slowed, honked, rolled down the passenger side window and yelled: “Get on the sidewalk!” I wasn’t even in her way. With all the bike lanes, shared lane markings and the growth of bike commuting, I find it hard to believe that everyone in Milwaukee doesn’t know it is illegal for people to ride bicycles on the sidewalk.

The next two incidents occurred while I was walking in marked crosswalks. Neither driver even had to stop, just slow a few miles per hour to yield the right of way. The second time I was told to get out of the road, it happened in a crosswalk with one of those bright yellow in-street sign that says, “State Law: Yield to Pedestrian In A Crosswalk.” I just pointed at the sign and stepped onto the curb, but the driver still honked again as he was driving away.

As the vintage cartoon below indicates, road rage is nothing new. People have been getting angry when they get behind the wheel for about as long as there have been motor vehicles.

You might chalk it up to seasonal affective disorder.  I’ve always figured road ragers tend to be angry in the car or out, but a recent study published in the journal of Transportation Research Part F: Traffic Psycohology and Behaviour found that instead, there might just be something about being in a car that actually makes some people angry or feel more free to express anger.

The study showed some positive connection between anger in general and road rage, but also showed that just because someone tends to flip out if they are stuck in traffic, doesn’t mean they will yell at you if you take too long in the line at the bank teller or forget something and make them wait at the grocery check-out.

Other studies have indicated that people feel a certain cloak of anonymity when driving that frees them to express their anger. I think this is kind of like anonymous comments on the internet.

At the Bike Fed, we don’t get angry, we educate and encourage. Thanks to our Share & Be Aware program, we are able to go to the state Drivers Education Instructors Convention each year, provide curriculum about pedestrian and bicycle laws and encourage them to include it in their classes. The Share & Be Aware program also allows us to get billboards and PSAs out that reach millions of people.

Crash rates have been dropping for a couple decades now, and we hope our efforts play a part in that downward trend, but one has to wonder if there is just something about getting behind the wheel that turns people into rageaholics. Maybe the Bike Fed should teach people to wear Santa suits when they ride. The Santa Cycle Rampage is about the only time I know that everyone who honks at me is happy to see me on the road.