Victor’s Is a Hit on New Year’s Eve

The celebration lasts 34 hours here, and attracts a 1,000-plus customers. Will Mark Belling be there?

Probably no bar or restaurant in the area does bigger numbers on New Year’s Eve than Victor’s, 1230 N. Van Buren St. There isn’t a saloonkeeper in the city that wouldn’t be happy to swap tills with Victor Jones the morning after.

For one thing, few places have the 420 person capacity of this 1966 tavern — a number that does not include the crowds that will be housed in tents in the parking lot for the end-of-year festivities. And while some busy places give it up and close around 4 a.m. on New Year’s, Victor’s will remain open from 4 p.m., Wednesday, December 31st straight through to 2 a.m. on Friday, January 2nd, 2015. During that 34-hour stretch more than 1,000 customers will file through the place, and wait staff will fill their pockets with thousands of dollars in tips. Semi-trailers from beer distributors will be parked on site, if the past is any guide, and will be drained of their contents throughout the night and day.

Victor’s is seen by some as a throwback, with its black ceiling, mirrored walls, disco dance floor and dozens of cozy booths along the perimeter of the 5,725 square foot tavern. Its reputation as a singles bar obscures its well-deserved status as a fine restaurant. The fish fry here, for example, is a monster, and you can get your fish baked if you would like. The place does about 30 per cent of its business in food, featuring bar food as well as fine dining.

But once the plates are carried away, it’s time to party here.

Although the shiny surfaces and shined-up customers (all perfectly clean) predominate at first glance, a closer look shows the workings of a very efficient business operation. It has been run for nearly 50 years by Victor Jones, 84, who still owns 100 per cent of the stock as well as the real estate of the bar he built in 1966, with additions in 1970 and 1984. The only portion of the place that appears original, sadly, is the men’s room, which lacks the luster of the rest of the place.

At the bar in Victor’s. Photo by Michael Horne.

A look at the centrally located main bar shows a very well-organized four-part set-up quite unlike any other in the city. The seating wraps around the bar service area for 360 degrees. Each half of the longer sides of the bar is divided into two stations, with a passage between. Bartenders can run figure ‘8’s if they have to, rather than push and shove their way past their fellow workers.

This arrangement of the business part of the bar into quadrants is hardly accidental. Each bar station is equipped with a cash register, requisite glasses and bottles, rags and other essentials. Missing, however, are such usual Milwaukee tavern fixtures as soda guns and beer taps. These appurtenances eat up counter space that could otherwise be used to sling drinks and seat customers. For a high-volume location, this is an important consideration.

The arrangement also helps discourage beer drinking — and if that alone is not sufficient to do so, a glimpse at the beer list will convince the visitor that cocktails are the way to go here.

The bar surface itself is granite, with a brass upper rail. Resupplies of ice are delivered via elevator through a trap door in the floor. How cool is that! The mirrors on the walls are very large, and therefore very expensive. The bar has plate glass windows on its long south wall; but they are of little use for admitting sunlight. Who needs sunlight when you’re sitting in Victor’s?

Not Mark Belling, that’s for sure. Just take a look at him at his regular seat at the bar, where he likes to eat (bar menu, not the fancy one). The bar has backed, padded, swivel stools on a black and red carpet. There are seven five-seat tables along the south wall by the windows, along with many other seating areas.

Although mirrors are usually employed to make a small space look bigger, at Victor’s somehow they accomplish the opposite. It is not until you push your way back into the recesses of the place that it becomes evident that there is a whole ‘nother bar in the back, in an “L” area. along with a service area for the busy wait staff.

Back at the main bar, the staff generally operates with lightning efficiency. (It helps that the customers are pros, and know what they want.) On a recent visit, I witnessed a drink being ordered, prepared, served, paid for and change given all in under ten seconds. And I saw the process repeated several times over during the course of a few minutes. (Don’t keep Mark Belling waiting!)

Like many clubs, Victor’s has a variety of weekday specials, service industry night discounts, and even the occasional late-night free pizza.

But New Year’s is an animal in its own right here. Dinner is served from 5 to 9 p.m., with reservations recommended.

If you show up between 8 p.m. and 11 p.m., you can get the Early Party Package for $25. That includes four drinks (mixers or domestic beer — you know which to choose). Early partiers also get 24 hour admission to the place (people like to come and go here a lot) along with a midnight countdown.

Victor’s Dry Select Champagne is available for $15 for customers from 8 p.m. on.

Folks who just want to pop in for General Admission will pay $15 and get one drink on the house, along with admission and unspecified party favors.

After 1 a.m., admission is $10. If your appetite is for Double Tall Skyy Vodka and Red Bull, this is the place for you, since it will cost you $10 all night. Complimentary pizza from 4 a.m. to 7 a.m. will pass as breakfast for some customers. Dancing will be continuous until noon on New Year’s Day, thanks to D.J. Chris. 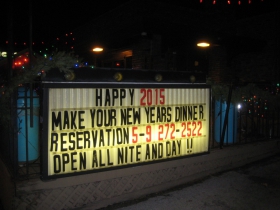 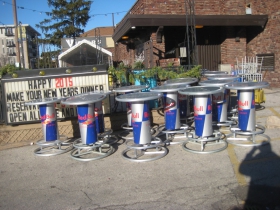 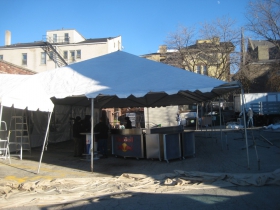 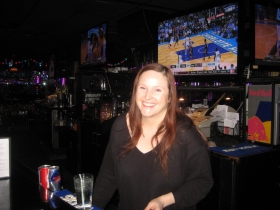 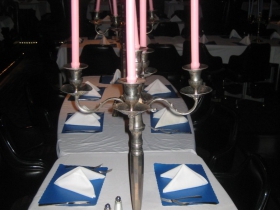 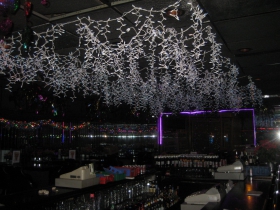