Gaffigan’s annual holiday run at the Pabst showed him sharpening his anti-Chicago barbs.

Jim Gaffigan, the Pale Comedy King Of New York (by way of small town Indiana), returned to his “hometown-in-law” for his annual holiday run at the Pabst Theater, a three-show stop on the White Beard Tour, which is produced by his wife, Jeannie Gaffigan, a Milwaukee native. Jeannie Gaffigan (then Noth) was a star of the stage at Rufus King High School, which I attended. I can still picture her headshot outside the theater director’s office. You might not see her face on a commemorative Point Craft Brewery pint glass but she is the hard-working woman behind this great man, who’s built a successful career on mostly food-based humor. His annual run at the Pabst allows the family to visit with the in-laws and extended family during the holiday season.

Last time I saw the Gaffigan clan in town the patriarch performed without a traditional opening act, but instead Jeannie brought out their children and most of them Irish danced. It was absolutely adorable and amusing. This time around Tom Shillue of Late Night WIth Jimmy Fallon barbershop quartet fame did a solid 10-minute opening set. Shillue nailed a series of bits about politically incorrect 70s commercial jingles and mean 70s dads that even an 80s baby like myself could enjoy.

Gaffigan walked out to Jay-Z and Alicia Keys’ “Empire State of Mind,” but didn’t talk about big city life until the middle of his set. He began with an excellent chunk of Milwaukee-centric material. With each new holiday spent on Wisconsin soil his local jokes get better and better. (“Have you been to Water Street? It’s like Prohibition just ended there!”) When he transitioned into his familiar food focused bits it felt like he was still working us Midwesterners. After all, many of us would welcome an offering of cheese and summer sausage in the morning.

By the time Gaffigan’s first book was published, 2013’s Dad is Fat, it was a New York Times bestseller. This tour comes on the heels of his latest offering, Food: A Love Story. Signed copies of the book were available in the lobby for a modest price, as well as limited edition posters. After the show the line to take pictures with the beloved comic far outstretched his waistline.

Gaffigan’s best material covered the topics of each book (parenting and food), with his kid jokes entering hilariously dark territory. He pleased long-time fans with a hearty Hot Pockets finish. While Gaffigan admitted to loving football and enjoying both the Packers and the Bears (seemingly impossible), he did end his one bit of crowd work (after a drunk person shouted out) with a Windy City put down. After eight years of this New Years tradition Gaffigan has at least learned that if you crap on Chicago it will kill. 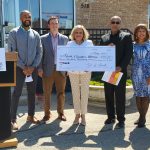