The consulting company relocates to neighborhood where it all began 156 years ago.

The Historic Third Ward is going to be a bit busier now that Dohmen Co. has begun moving employees into their new corporate headquarters. In late 2013 Dohmen bought a one-story building at 417 E. Chicago St. that was formerly occupied by Milwaukee Magazine, Fanatics Sports Bar and a number of other tenants. The 42,1414 square-foot building was built in 1964, but Dohman hired Kubala Washatko Architects and DeMichele Co. to design and manage the overhaul of the building into a new corporate headquarters.

When the project is finished, Dohmen will have 110 employees at the overhauled building. Workers were on-site today cleaning up the trim around the newly installed windows, while Dohmen employees were working in the building.

Dohmen purchased the building and parking lot for $10 million from the Kathleen D’Acquisto Irrevocable Trust. That purchase netted Dohmen the entire block bounded by E. Chicago St., N. Jefferson St., E. Menomonee St. and N. Milwaukee St., which at the time was assessed at $3.387 million. The D’Acquisto family, which operated Fanatics, Hilo and other establishments in the building, acquired the building from Johnson Controls in 1994.

Dohmen provides technical consulting services to life science manufacturers today, but was originally founded in 1858 as the F. Dohmen Co, a wholesale pharmacy led by Frederick Dohmen. That was long before anyone ever offered “technical consulting services to life science manufacturers,” and also before the tragic Third Ward fire of 1892. That fire left 2,000 people homeless and destroyed much of the neighborhood, including Dohmen’s building, which had the misfortune of being next to the Union Oil Company, where the fire began. Fire would again find Dohmen in 1915 when the firm was at 267 E. Water St. (today’s 300 block of N. Water St.), and that blaze caused $238,000 in inflation-adjusted damage.

The headquarters of the firm had moved to the Third Ward in 2009 from Germantown (after being temporarily relocated in Menomonee Falls).  The move back to the city will consolidate all of the firm’s operations across the state at this Third Ward location. The company also has operations in San Francisco, Ontario, Denver, St. Louis and Memphis. It’s still family owned, now in the fifth generation and led by Dohmen descendant Cynthia LaConte.

The Dohmen project is yet another example of the Historic Third Ward’s continuing ability to reinvent itself. The neighborhood was once almost all wholesalers and warehouses. Today, much of the traditional street grid is intact, as are many of the century- old warehouses, but they are now used for completely different purposes. The warehouses are largely offices, apartments, condominiums and retail stores, with new infill development sprinkled inbetween. Some industrial and warehousing uses in the Third Ward remain, although they’re confined largely to the eastern part of the neighborhood in single-story buildings.

The Dohmen project is a good example of how one of those more suburban-style buildings can be re-purposed to largely fit within the walkable neighborhood. The building is much more open to the street with large window bays, has simple, but welcoming landscaping on its setbacks and has a clear and significant front-entrance at the northwestern corner. Nothing less would be expected of Kubala Washatko Architects though; the firm designed a number of quality urban projects in the neighborhood including the Milwaukee Public Market, Colectivo Coffee (E. St. Paul Ave.) and Aveda Institute.

You’ll have to wait for a future installment of Friday Photos to see more, but a construction fence is going up a block away from the new headquarters.  The Kimpton Hotel project is about to break ground. 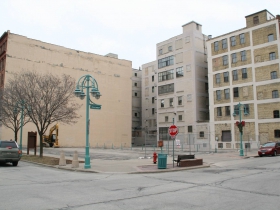 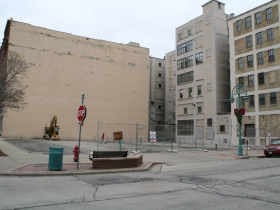 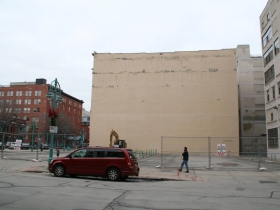 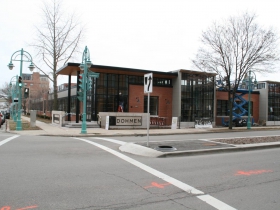 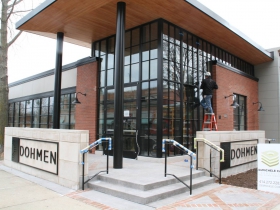 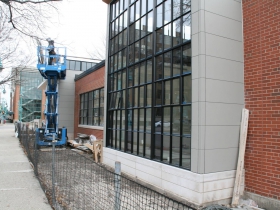