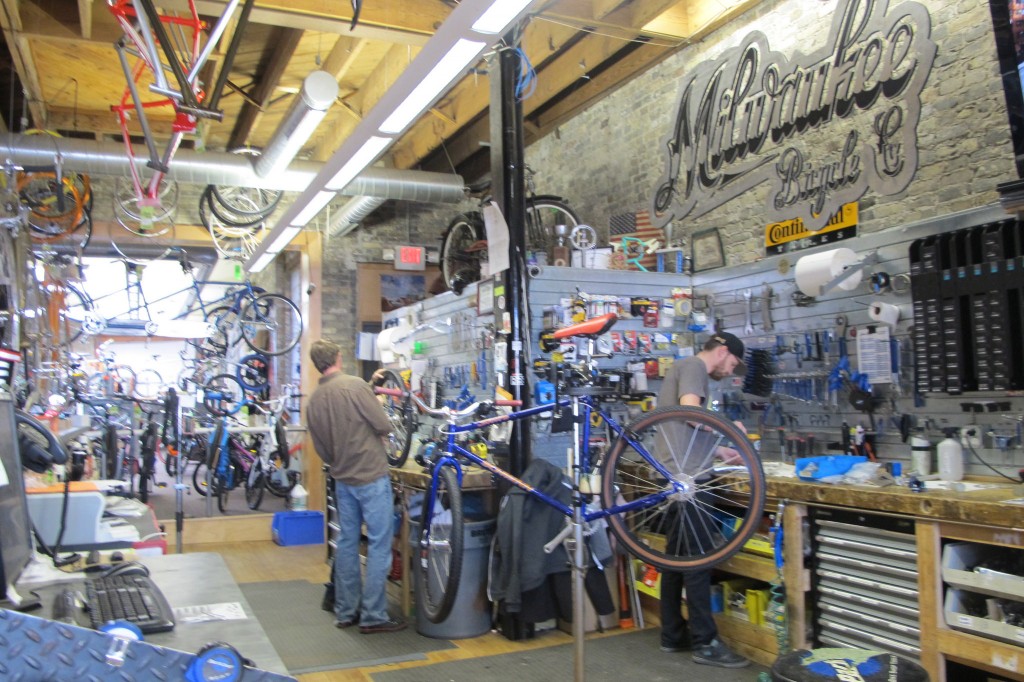 For the past 22 years, Vince Hanoski, owner of Ben’s Cycle & Fitness at 1018 W. Lincoln Ave., has enjoyed renovating blighted buildings near the bicycle shop.

Hanoski’s newest acquisition is the former bakery at 1017 W. Lincoln Ave. He said he has no plans for it yet, but hopes to repurpose the building for residential and commercial use. Hanoski, 49, also owns the former Riviera theatre, and the building next to the theatre, which houses the Milwaukee Bicycle Company. 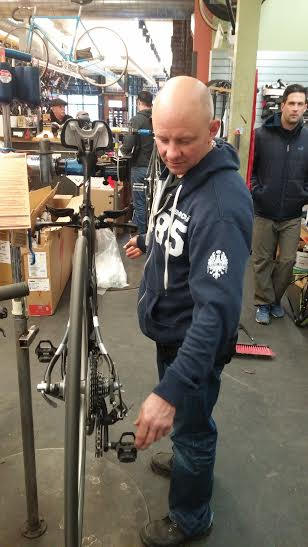 Ben’s Cycle & Fitness owner Vince Hanoski works on a bike at his store on Lincoln Avenue. (Photo by Paul Warloski)

Despite his forays into real estate, the third-generation bicycle-store owner has no plans to leave the retail business. Ben’s Cycle was started in 1928 by Ben Hanoski, Vince’s grandfather, and it has always been located in the heavily Polish and Latino neighborhood of Lincoln Village.

The Hanoskis have renovated the bike shop together many times. “It’s a family tradition. “Working in retail is a lot of hours, [but] in the winter, we’re kind of slow so I like to work on other projects then,” Hanoski added.

In addition to working with his father, Hanoski learned rehabbing in many “trial by fire” experiences when he acquired the old theatre across the street from the cycle shop, at 1013 W. Lincoln Ave., in 1999.

“Our business was growing faster than we expected. With the Internet booming in the early 2000s, our eBay, Inc. side of the business grew,” he said.

Renovating the theatre took a year. For months, Hanoski took truckloads full of garbage out of the building. He now uses the building as a warehouse, although pieces of the theatre are still very much intact. Visitors can see the stage, balcony seating and exposed Cream City brick. The “tres” ceiling is still painted in deep shades of green and purple, contrasting with the white walls.

The light fixtures in the warehouse were all made by Hanoski and a friend, using old bike frames. “I was going to buy chandeliers, but my buddy looked at me said, ‘No, we’re making them,’” Hanoski explained.

The theatre closed in 1955 and at one point it served as a warehouse for Goldmann’s, the former department store giant on Historic Mitchell Street. For years it was an eyesore on the bustling street.

“I didn’t want my customers seeing that,” said Hanoski. “I wanted to make an investment in the neighborhood.”

Hanoski’s efforts have contributed to improving the Lincoln Village neighborhood in recent years. “Vince’s investment in the neighborhood is refreshing; that area of Milwaukee has a rich history and a very bright future,” said Jeff Fleming, spokesperson for the Department of City Development.

Another of Hanoski’s real estate acquisitions was the building adjacent to the theatre, which now houses Milwaukee Bicycle Company, the retail outlet for bicycles manufactured by Ben’s Cycle. Hanoski knocked down a wall and built a doorway to connect the two spaces.

“The Milwaukee Bicycle Company line is our own line of bicycles: high quality steel bikes that we sell throughout the world,” said Paul Warloski, a spokesperson for Ben’s Cycle.

The creation of more bicycle lanes in the city and greater access to bike trials has spurred renewed energy in the cycling community, and Hanoski said he has had the opportunity to move to the East Side, “where the customers are,” but decided against it.

“Ben’s understands what their role in the neighborhood is,” said longtime customer and Milwaukee County judge Pedro A. Colón. “They’ve never lost focus. They’re doing business in a respectful way to the neighborhood.