The Fantastic World of Eric Hancock

The Milwaukee illustrator creates playful fantasies that have been exhibited in New York, L.A., England and Germany

Eric Hancock was born in Green Bay, Wisconsin. His family lived close enough to Lambeau Field to hear the chants of the fans, see the bright lights on Packer game nights, and not worry about parking. Eric remembers his middle school art teacher Mr. Gordon, who introduced him to dot structuring and grid method drawings that allowed him to eventually excel at more complex drawings.

Young Eric decided that an oil paint kit would be a great investment for his creative growth. For a middle schooler, that involves a sit down with mom to plead your case. “I had to work that one off pretty good,” Hancock says. But the kit paid off. He learned to paint sunsets by using 4×6 canvas boards and copying from another picture. And Hancock was ultimately accepted into the Milwaukee Institute of Art & Design, with scholarships he’d won to boot. Although the scholarships couldn’t cover all the fees, what they couldn’t Hancock deemed investment worthy. “MIAD empowered me to be myself and to stand by my work,” he says.

Milwaukee brought Hancock into contact with Discover Magazine, the science and adventure magazine published by Kalmbach Publishing Co. in Waukesha. Hancock created a series of illustrations for them, based on a wolverine named Buddy. What made Buddy’s story so interesting is that the wolverine migrated from Idaho to the northern California Sequoias, where these animals are never found.

Hancock, who now lives in Riverwest, has a fascinating reach as an artist, considering his work has been exhibited in places like California, New York, and even Germany.  Whether e-mailing gallery owners, shipping work, or just inquiring about new exhibiting opportunities, he has become very adept in managing long distant gallery affairs. Take the Bottleneck Gallery in New York. It all started when he sent them a cover letter, along with a portfolio, explaining what he’d been working on at the time and why he felt it would be relevant in their upcoming shows. They responded, telling him that the work he submitted was intriguing and suggested a show they thought some of his pieces would be great in. The exhibit, called “The Gang’s All Here,” consisted of 50 different artists. It would be the first of many shows that Bottleneck Gallery and Hancock would collaborate on.

On the other side of the states Hancock connected with a gallery in Los Angeles, the Hero Complex Gallery. It operated as a “pop up gallery,” meaning the shows would be curated, then exhibited in galleries all across the west coast. In working with Hero Complex, Hancock learned that L.A.-style communication was completely different than on the east coast. The communication was slower and more casual. Adam, the Hero Complex curator, had seen Hancock’s work at Bottleneck Gallery and liked it. The first show he did for the California gallery was called Oscar Legends. Hancock offered a couple of his Coen Brothers pieces for display. The gallery is now located permanently in L.A. and has doubled its space.

So Hancock now has galleries on both coasts he works with. This past October, he was featured in Bottleneck’s “Teenage Mutant Ninja Turtle Show.”

He also has a contact in England by the name of Darren Di Lieto, who runs the Little Chimp Society, which promotes and publishes books of illustrations. Hancock took part in its awesome gallery experiment called Mail Me Art. Artists are asked to create a piece of art work and then place a stamp right on the work and ship it to the gallery. Once received, Di Lieto would post them on his website and take them on the road as a traveling gallery around Europe. But Hancock’s work took two months to arrive in England. Turns out the work had somehow been detoured to Vietnam, before it was re-stamped and sent to England. The illustration told a story, but now had another story to tell, that of its odd journey through the world.

Then there is Hancock’s German connection. Through a website known as B-Hance, which has now been purchased by Adobe, he became connected with Christian Shupp, who asked Hancock to participate with a book he created, and later, with a traveling art show, created to compliment the book, which was shown in 15 galleries throughout Germany. Hancock’s playful piece portrayed a yeti, or abominable snowman, fishing on an island, while birds hung out and observed. A yeti in a tropical setting made quite an impression.

Hancock lived for awhile in Chicago, where he created a business selling hand-crafted stuffed animals. He eventually decided to call it quits, taking away a valuable lesson. Hancock was pleased with the finished products, but not in love with the process of creating the work. He took this lesson and applied it to his portfolio, concentrating on the kind of work he really wanted to do. Meanwhile in Chicago, Eric worked for a restaurant that won the James Beard Award. Beard, once deemed “The Dean of American cookery” wrote cook books which Hancock remembered for their great watercolor food drawings. This inspired Hancock when he was forming the idea for his Ninja Turtle piece for Bottleneck Gallery. He came up with this idea to deconstruct food in drawings, yet make it something that could be reminiscent of the Ninja turtles, in a classic comic book style, while having the warmth of 19th century Americana drawings. “An illustration that can be hung in your grandma’s kitchen, but then also connecting it to the teenage mutant ninja turtles,” is how he describes it. He used watercolor and colored pencils to create it.

Hancock has always loved comics, including Marvel comics like Fantastic Four and X-Men. He notes that that Marvel illustrators like Frank Frazetta and Drew Struzan actually painted familiar comic book characters and some not-so-recognizable characters for a a special edition comic book called “The Art of Marvel.” A vivid piece by Thiebaud, with a pastel painted white rabbit, included every color in the spectrum. Hancock fell in love with the fact that the rabbit seemed as if it was real. It’s fur, white and fluffy, came from a Trompe L’oeil effect, that made it look real enough to touch.

He soon worked to master this effect. “Bread that I drew looked as thought it would be crusty as bread would. Silk would be silk. Ice would be ice.” Over a period of years he worked, “refining this visual vocabulary and building upon it to create my own language,” he says. Hancock says he also gets inspiration from his peers: Artists like Rich Pellegrino, Nicole Gustafsson, and Scott Cambell.

You can find more about his work at his website or at his blog, at roguemeat.com. He with be featured, along with Milwaukee artist Katie Gamb at an upcoming show, “Spatium Invisus,” at Hot Pop Gallery, 201 N. Water St., starting January 16th, 2015. His will consist of folklore, fairytales, animals, and of undiscovered spaces and beautiful moments in nature that walk the line of real and surreal. It’s all part of Eric Hancock’s unique world. 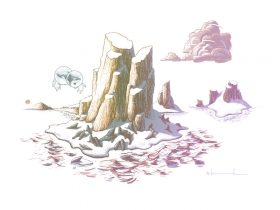 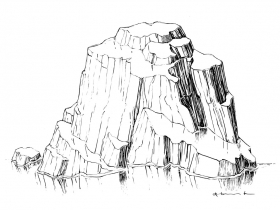 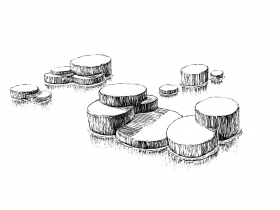