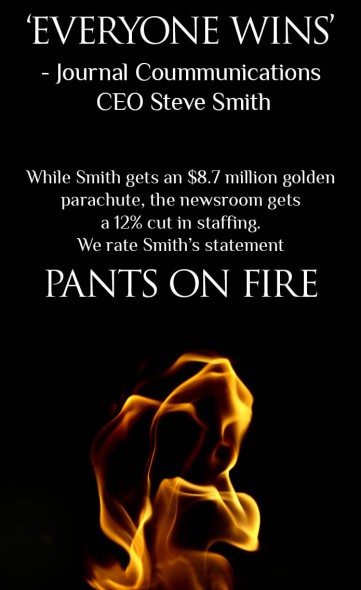 Pants On Fire in the newsroom bathrooms

These are not happy times at the Milwaukee Journal Sentinel. The newspaper just went through another round of staff buyouts.  And more layoffs are expected once the paper’s new owner, E.W. Scripps, takes over. Morale at the paper has probably never been lower. No one’s position seems safe and some are predicting the final meltdown of the paper — to an online-only publication — could come soon. The departure of the paper’s long-time editor, Marty Kaiser, only underlines the perilous condition of the newspaper.

Under the circumstances, its nice to have someone to blame and Steven J. Smith, chairman and CEO of Journal Communications, is made to order for the part. A little home-made poster, which I’m told has been posted in the newsroom bathrooms, offers a parody of the paper’s politifact column, giving Smith a “pants on fire” rating, for his announcement that “everyone wins,” when it was announced that E.W. Scripps would be “merging” with Journal Communications.

In fact, this was a purchase of the company, with Scripps getting the majority of stock in the deal.  And while Smith was already a millionaire before he actively pursued a deal with Scripps which will give him a huge payout, JS reporters keep getting hit financially. The ever-shrinking newsroom has seen an additional 12 percent cut in staffing, the poster declares.

Smith was the first company CEO who didn’t come from the newspaper side of the company, and he led the company’s transition from a privately held to publicly traded company. This led to a horrible drop in the value of the stock, thereby hurting countless staffers, who had long relied on the stock to fund their retirement. Many argued the transition to a public company was inevitable, while detractors argued Smith hoped to generate money he could use to buy more TV and radio stations.

As for his pursuit of Scripps, while the sale of Journal Communications may have been inevitable, some would argue that a better company might have been found. Scripps has made it clear its main interest is in broadcast journalism. Of course, the interest in newspapers at this point is not very high.

Regardless, Smith is the captain leading the Titanic into the iceberg, but he isn’t going down with the ship. He’ll be rowing away in a lifeboat laden with gold, one more victor in a country beset with the biggest wealth gap in its history. It could have made a wonderful watchdog story for the Journal Sentinel.

Categories: Back in the News, Business

5 thoughts on “Back in the News: We Hate You Steve Smith”