The number of fatal bike crashes in Wisconsin continues to decline even as number of bicyclists increases.

By Dave Schlabowske, Bike Federation of Wisconsin - Dec 5th, 2014 01:31 pm
Get a daily rundown of the top stories on Urban Milwaukee

To date, only four people have been killed riding bicycles in Wisconsin, despite the fact that about half of the state’s 5,742,713 residents ride bicycles. No matter how you cut it, statistics like those makes riding a bike an incredibly safe thing to do for recreation or transportation, even more so if you factor in the health benefits.

This is from the “Weekly Fatal Report” I get via email from the Wisconsin Dept. of Transportation. Not the cheeriest of subject lines in my inbox, but it’s important to track accidents to try to reduce the chances of them reoccurring.

At this same time last year 10 people were killed riding bicycles in Wisconsin. and we finished the year with the same number. With more and more people pedaling into the winter, it remains possible to have another fatal crash before this year ends, but it is unlikely (knock on wood).

We typically have fewer than 50 crashes in December and generally no fatalities. February is the month with the lowest number of crashes, which is not surprising given it is generally our coldest month. source: Wisconsin Bicycle Crash Analysis using Crash Typing

As you can see by the chart below, since 1990, the overall crash rate in Wisconsin has gone down significantly, despite the fact that bicycle commuting use in urban areas is way up. If we assume a relatively constant recreational use in rural and suburban areas (as our WDNR SCORP numbers suggest), that means actual crash rate has gone down even more.

The number of crashes has been on the decline for years, even as the number of people commuting by bicycle increases. The fatal crash numbers are so small, that the variations from year to year are probably statistically insignificant. Of course our goal is to make that number zero.

The number of crashes has been on the decline for years, even as the number of people commuting by bicycle increases. The fatal crash numbers are so small, that the variations from year to year are probably statistically insignificant. Of course our goal is to make that number zero.

Despite the poorly reporting in the Governor’s Highway Safety Report, which made recent national headlines for drawing erroneous conclusions from some incomplete data, bicycling is getting dramatically safer across the nation. The GHSA’s Spotlight on Highway Safety: Bicyclist Safety notes that yearly bicyclist deaths increased 16 percent between 2010 and 2012, while overall motor vehicle fatalities increased just one percent during the same time period, but it failed to compare crash numbers to the increase in people riding. Once you factor in the growth in riders, the actual fatal crash rate is way down nationally, just as it is here in Wisconsin. 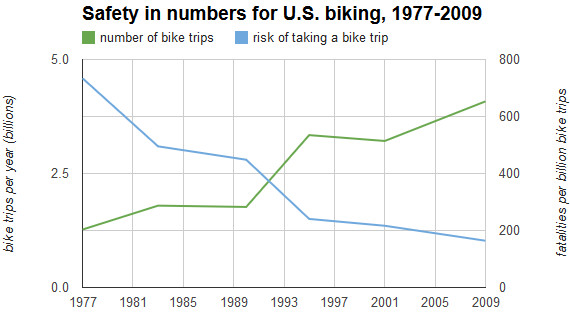 Of course even one person killed riding a bicycle is one too many. Our two biggest programs at the Bike Fed are Share and Be Aware and Safe Routes to School, and both those programs will become a bigger part of our budget for 2015. Share and Be Aware is a statewide safety program that combines one-on-one outreach at events and adult safety classes with an encouragement campaign to get people walking, bicycling and driving motor vehicles to obey the rules of the road and take greater care in higher risk situations. Every year, the Bike Fed’s Safe Routes to School program teaches thousands of kids how to walk and bike legally and safely.

One of the Share & Be Aware billboards we designed, this one sponsored by Wheel and Sprocket. – See more at: http://wisconsinbikefed.org/2014/12/02/fatal-crashes-down-in-2014/#sthash.tWa2G9dA.dpuf

Over the years we have been running those two core safety programs, we have reached millions of people through our promotional efforts like PSAs and billboards, and we have personally reached tens of thousands of adults and children. We are proud of those efforts and are always looking for ways to expand them. If you would like us to work on traffic safety issues in your community, contact Jessica Binder in our Milwaukee office to see how our team of Share and Be Aware from around the state can help. If you are interested in a Safe Routes to School program for you child’s school or your community, contact Jake Newborn, also in our Milwaukee office.

You can view videos of the public service announcements on the Bike Fed YouTube Channel by clicking here.  The radio spots are basically just the sound from the videos.  Below is a sample.

We have other PSAs that address walking, bicycling and driving. We also printed half a dozen different two-page safety brochures that we can give you for free to distribute in your community, school, or if you are organizing a group or charity ride. Again, just contact Jessica Binder in our Milwaukee office to find out more about those free brochures.

We will keep doing our part, but we need you all to do your part as well. Almost all of us walk, bike and drive motor vehicles. The biggest impact we can have on reducing the crash rate further is to pay full attention to the act of driving when we are behind the wheel. That means driving the speed limit (never faster) or slower when we are sharing the road with more vulnerable people walking and bicycling. When we are riding or walking, we should also follow the rules of the road. On a bicycle that means obeying traffic signals, stop signs and riding in a predictable manner. Sidewalk riding may feel safer, but it is usually more dangerous than riding on the road. And while helmets are not required by law, they are the best thing you can have on your head if you are involved in a crash.

When walking, cars are required to yield the right of way as soon as you enter a crosswalk, but you cannot enter the road suddenly if motor vehicle traffic does not have time to stop. A general rule of thumb in urban areas with 25mph-30mph posted speed limits is that you can safely enter a crosswalk if traffic is half a city block away. There remains a lot of confusion about crosswalks among pedestrians and drivers, so we wrote this recent blog post, which includes more  information about the diagram below. 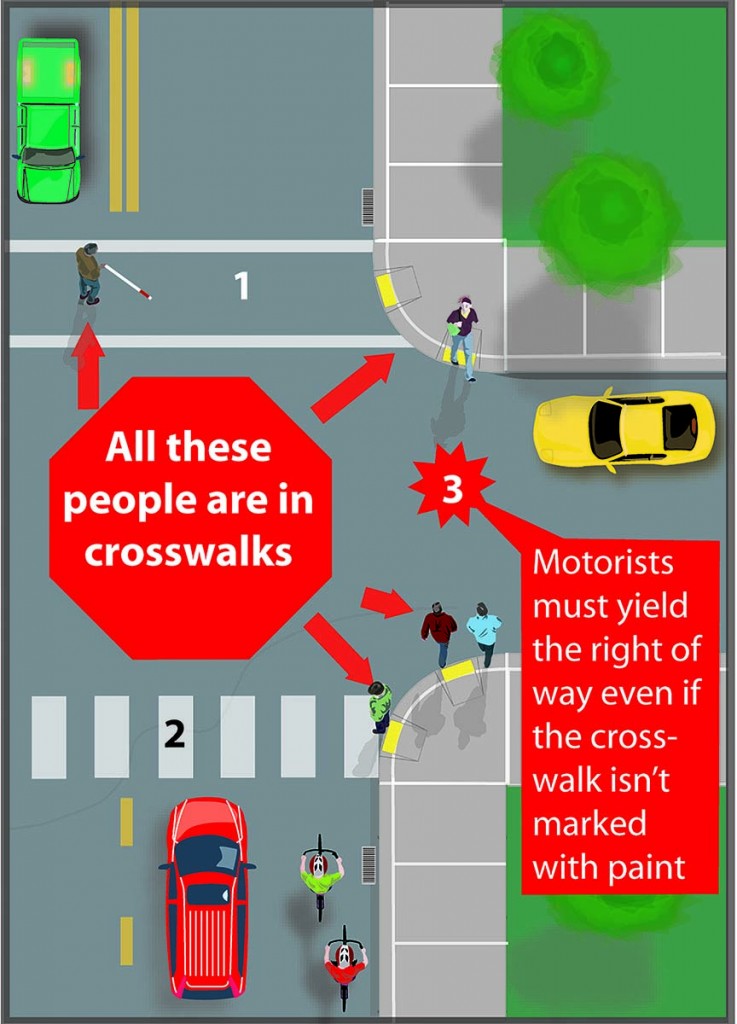 Some crosswalks are marked and others are not. Some have right-of-way controls, like stop signs or traffic signals, others have none.

All-in-all, we have a lot to be thankful for this year when it comes to bicycle safety. Let’s all do our part to ring in the New Year with one of the safest years for bicycling in Wisconsin history.