The recent closure of Downtown’s “España” restaurant should no longer worry aficionados of Spanish cuisine. Three months ago, Movida opened in Walker’s Point, not far from Downtown, and it’s a winner.

Its name, as the restaurant’s website explains, comes from the Spanish term “La Movida Madrilena,” or “The Madrid Movement” which marked an end and a beginning in Spain. Once an underground movement, la movida emerged as a countercultural revolution, making the unacceptable acceptable.

Spanish cuisine is European and Mediterranean in nature, not Mexican or South American (though the influences of Spanish cuisine are readily apparent in Latin-American cooking). Lemons, olives and olive oil, garlic, onions, saffron and smoky paprika, as well as New-World ingredients, like peppers and potatoes, play important roles in Spain’s typical diet. Spanish cuisine was also impacted by hundreds of years of occupation of most of the Iberian Peninsula by Muslim conquerors from North Africa who were finally ousted by King Ferdinand and Queen Isabella just before they sent Christopher Columbus sailing to the Americas. As a point of resistance against the Muslim conquerors whose religion bans the eating of pork, the Spanish consume it in abundance. Made from free-range pigs who feed liberally off of acorns in the wild throughout the Spanish countryside, the thin, delicate slices of Iberian ham (jamón Iberico) are legendary at Spanish restaurants and tapas bars.

And that legendary Spanish ham is available at Movida, but for a hefty $45 price – the most expensive thing on their menu. But, in their defense, it is the real deal served up in paper-thin ribbons delicately carved off a whole, wild-pig ham from Spain complete with the black hoof secured by a special vice grip, exactly how I saw them do it in Spain a few years ago. iOlé!

Though the restaurant’s exterior is of the don’t-blink-or-you’ll-miss-it type, the interior brought back memories of sitting in cozy Spanish tapas places in Madrid and Seville accented with centuries-old wood and Imperial-Spanish décor, like the pretty crystal chandeliers at Movida which bathed us in sexy low light. To the back of the restaurant is a cooler holding Iberian hams that you may purchase. And there is a second level upstairs which is popular for small parties. Some quotes by famous Spanish artists and Ernest Hemingway, who loved Spain, are painted decoratively above the first floor: “I drink to make other people more interesting,” said Mr.  Hemingway

The food at this restaurant is served in the authentic Spanish-tapas way. Everything comes on wooden serving boards in small portions. The Spanish word tapa actually means “cover.” A tapa was once a small plate used to cover one’s drink in a bar to keep out the flies. They eventually came with food served on them. Then, in time, they became the small plate snacks famous throughout all Spain and, in fact, the whole world.

To start us off, one of the owners, who spent 15 years living in Madrid, personally served us complimentary bread with a lovely cheese compote infused with mild guindia chilis from the north of Spain, honey and orange glaze.

My companion ordered the seafood paella for $15. Note that these paellas are made to order and must be requested 35 minutes in advance. Also, if you want yours with the traditional, crispy-brown-burnt rice on the bottom (called “socarrat” in Spanish), you must let them know when you order. We figured that’s probably because American customers complain that it’s burnt and send it back. Anyway, I’ve never seen such cute, little personal paellas in my life!  About six inches in diameter, this adorable dish came with spinach and plenty of sweet, tender calamari, shrimp and a teeny-tiny octopus (which, by the way, was flavorful and tender). The rice was cooked perfectly al dente and was richly infused with saffron, a must in any paella recipe.

Before the paella arrived, we shared an order of the Brussels sprout “chips” for $6. Delicately crisp and salty, my friend said they tasted exactly like the fried kale that she makes at home. They were really nice, but tricky to eat – I used the yeasty, crusty bread they generously served and replenished at no cost to scoop up the little flakes.

For $12, I ordered the “Lomo Tosta” – a tosta is something served on a small slice of toasted bread, and this was three char-grilled medallions of pork tenderloin deliciously marinated and served on toastettes over a slice of brie and pickled apricot. Very Madrid, very rich and very tasty.

I also opted for an order of the Serrano ham for only $7.50, which is very close to the Iberico ham. It came as a nest of dainty, carved ribbons served next to three slices of tomato toast, which is another very traditional, Spanish tapa normally made by rubbing the toast with raw garlic and a tomato half, then seasoning with salt, ground, black pepper and maybe a sprinkling of smoky paprika. Simple, but richly satisfying, which is how these tasted.

For dessert, we couldn’t resist the Arroz con Leche Brûlé for $6, which is rice pudding topped with crispy-toasted goodness of a French crème brûlé and a generous sprinkling of pomegranate seeds. I told our charming and most attentive waitress that it was “iCielito en un cuenco!” (A little heaven in a bowl.)

We each had a glass of Spanish Cristilino cava, a sparkling wine, for $6.60, and flasks of cold water were replenished liberally throughout the meal. Curiously, the cava came served in tall, slender cylindrical cocktail glasses. After handling them, the cava eventually became too warm from our hands. If they were to change anything at Movida, it would be to serve the wine in traditional stemware. I understand that the theme of the restaurant is culinary innovation (something Spanish chefs are arguably leaders in achieving), but some things, like serving wine, are best left to traditional ways.

That quibble aside, I’d say Movida is a rising star on Milwaukee’s culinary horizon! 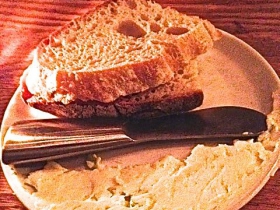 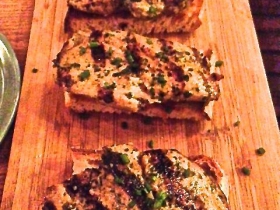 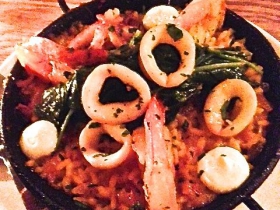 You can find paella recipes quite easily these days, but here’s a Spanish recipe you won’t readily come across. It’s one of only a handful of traditional beef recipes from south-central Spain. In general, meat dishes in Spain tend to be predominantly pork or lamb and, in Andalucía, it’s rare to find beef recipes on the menu. The use of olives in this dish adds some real Spanish flavor and compliments the beef extremely well. Use any of the green olives you find at a grocery store’s salad bar, not the briny type that come in jars stuffed with pimentos or garlic. To pit them, just crush them with the side of a chef’s knife or a meat tenderizer.

Preparation:
Season the beefsteaks with salt and pepper (I like to also sprinkle them with a little granulated garlic powder), then fry in a very small amount of oil to seal; add to a deep pot or saucepan.

Sauté the onion and pepper over medium heat until the onion is softened, add the flour and cook for 2 minutes before transferring to the pot with the beef.

Add the wine and 1 cup of water, partially cover and cook over low heat for 1 hour.

Add the olives and cook for a further 20 minutes, then serve hot with crusty bread to mop up the sauce.