Milwaukee Chamber Theatre show is fast--paced, hilarious parody and celebration of the Bard’s many plays.

It’s hardly the first time around in Milwaukee for the comedic rowdiness now known as The Complete Works of William Shakespeare (Abridged) [Revised]. But this manifestation (more accurately a manic-festation) emerges as the raunchiest best and most topical of them all at the Milwaukee Chamber Theatre’s studio stage through December 14.

It is a nonstop infusion of burlesque parodies, pop culture riffs, prancing and pratfalls, flying costume changes, toilet plungers and golf clubs wielded as swords, audience games and clever asides.  Those who know the bard intimately don’t have the edge in enjoyment they think. Those who hardly know Shakespeare are also being hit for belly laughs. All are gleefully forced to love the sophomoric as if it were a PhD in comedy.

The Milwaukee Chamber Theatre has united four actors well known in this region who meshed as student madcaps at UW-Whitewater and were eager to renew and universalize their  vaudevillian skill: Chris Kopatek, Rick Pendzich, Chase Stoeger and Marcus Truschinksi. With confidence, practice and considerable training in all the stage arts they clearly couldn’t wait to outdo and out-embarrass each other – and probably their veteran master of circus and stage maneuvers, director Ray Jivoff, who has been staging revues and teaching acting for decades.

One suspects that, along with whipping them into precision comedy, Jivoff had to slump over in giddy acquiescence at the instinctive side blows this quartet kept inserting. Their quicksilver ideas operate in tandem with the puns and crotch jokes that are the evening’s bread and butter (as frankly they were for Shakespeare).

Alongside the laughs built around the bard’s tendencies to repeat plot lines, feminine behavior and similar locales, a smidgen of time is given to remind the audience of the poetic greatness within the 38 plays and sonnets being spoofed. Only keen observers of the movement, manners and physical skills of the stage could move so adroitly from a fond salute to a thumb in the eye.

Technically the play was created in England more than three decades ago for an ensemble of three, written by Adam Long, Daniel Singer and Jess Wingfield. It has flourished in many variations, but the genius was to leave room for the inventions and interpolations every company can add, for freedom around the edges and sometimes within the madness.

Today, even the original authors might be floored by the Milwaukee company’s ability to make it all their own, with updated music, multiple references to modern celebrities and the image of Hamlet’s queen Gertrude melting into the Wicked Witch of the West. The local four deserve more than applause at their ability to add individuality to the established burlesques. They play freely with the entire audience as well as their own plants without missing a beat or the flinging of a prop.

The MCT production crew led by Judy Martel adds considerably to the energetic exactness of live theater and the spontaneity that only comes from mutual trust and expertly worked out enthusiasm. More proof that great romps aren’t as easy as they look. 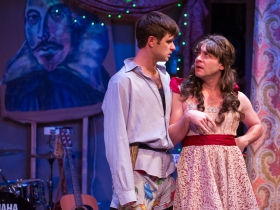 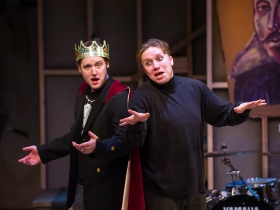 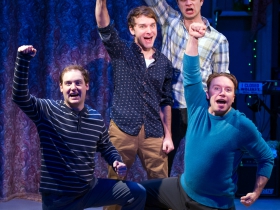