Is O’Donnell Purchase a Sweetheart Deal?

Something doesn’t seem right about the proposed sale of the O’Donnell Park garage to Northwestern Mutual by Milwaukee County. A small group of opponents argue the public interest is not being protected by Milwaukee County Executive Chris Abele, and I’m beginning to think they’re right.

The rationale here at first glance seems compelling: the county dumps a deteriorating garage that doesn’t make much money and will some day have to be replaced, and Northwestern Mutual (NM) buys it, fixes it up and gets a place for employees to park while allowing public parking on nights and weekends. True, the county only gets $14 million and after paying off the debt is left with just $5 million, but it dumps a fiscal headache and gives the garage to an upstanding Milwaukee company that promises to maintain the rooftop plaza as a public space.

So what’s not to like? Quite a bit, actually.

First, NM seems to be getting the property at a very attractive price. At county hearings, “five in all,” Milwaukee County Supervisor Patricia Jursik notes, “a range of $14 million to $40 million was discussed in valuations.  Clearly $14 million is at the low end of this continuum.” 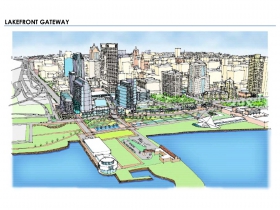 Second, the company isn’t just getting the parking garage. The sale also includes green space along E. Michigan St., which a city plan has envisioned as an ideal spot for a a high-priced, high rise development like Kilbourn Tower. If that happens, NM could sell the land for a very hefty price. So why don’t the valuations include the potential value of this land?

Third, the deal also includes the Miller Brewing Company Pavilion, the building housing Coast Restaurant and the Betty Brinn Children’s Museum. Yes, the parking garage is also below that building, but why not a public-private partnership with the county retaining ownership of the building and NM getting the garage below? Why does the deterioration of the parking garage justify selling the pavilion, which is in fine shape. And what’s to stop NM from jacking up the rent for Betty Brin or replacing the entire building with something that makes far more money, given its spectacular location overlooking the lake?  True, Betty Brinn’s leaders support the sale to NM, but that seems to be based solely on trust in the company rather than any legal guarantees.

Fourth, why doesn’t the deal include a prohibition that prevents NM from selling the green space or replacing the Miller Pavilion? The Abele administration has stressed there is a deed restriction that assures the land can only be used for public purposes but it doesn’t cover the entire property being sold. If you draw a line from E. Wisconsin Ave. east to N. Lincoln Memorial Dr. only the portion north of that line is covered by the deed restriction. County corporation counsel Paul Bargren has advised, “The County has the right to block any attempt by NM or any future owners to lift the parks-only deed restriction on the northern portion of the O’Donnell parcel.” And two other lawyers, Jursik and Bill Lynch, chair of the Lakefront Development Advisory Commission, both emphasize that there is no deed restriction whatsoever. Bargren says there are city zoning restrictions for the southern portion of the property, but that could be changed any time, as the city wants to do to accommodate construction of the high-rise The Couture.

Fifth, why won’t Northwestern Mutual agree to sign a deed restriction for the southern portion of the property? Jursik says she has spoken with NM representatives three times, including one conversation with NM CEO John Schlifske, and the company refuses to sign such a deed. “Part of what we’ve said all along is that we don’t ever envision that Northwestern Mutual would want something right across the street that blocks our view to the lake,” NM representative Sandy Botcher told WUWM radio. That is certainly a reason to avoid developing the north portion of the property (which is deed restricted anyway), but the company could develop the southern portion without losing its lake view.

If NM officials don’t envision ever approving such developments, why won’t they sign a deed restriction to that effect? “There have been a lot of representations by NM saying the property will remain an available to the public,” Jursik notes. “And yet when you look at the contract, it does not contain any language to that effect. They have said to me they don’t want their hands tied on that south portion. They will have the ability to completely redesign the property should they want to.”

Sixth, why won’t Abele change course and insist on a deed restriction for the southern half of the property? “I’m really concerned Abele is not protecting the public interest on this,” Jursik says. Abele says Northwestern Mutual has other land it could build parking on and “if we push for too much they are able to do other things.” He also notes the county’s past problems developing real estate on land it owns (largely because of board vs. executive squabbles he refrains from noting) and says he wants to send a message to developers that the county is a reliable partner: “We want to build on a reputation as easy to work with.”

But this may be a case of being too easy to work with. From a market rate perspective, NM seems to be getting a pretty good deal even without the southern portion of the property. But if it has the ability to develop that portion of the property, the deal looks like a steal. With that land included, Jursik says, “there’s no way that’s a market-rate proposal.”

And it’s not as though Jursik is demanding all that much. “As an attorney I know it’s easy to create deed restrictions,” she says. So why the opposition to adding it?

All concerned here emphasize that NM is a great company. “They are a wonderful corporate citizen of Milwaukee,” Jursik says. “But,” she adds, “they have to do the right thing for their community.” 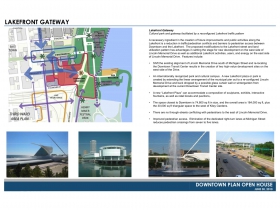 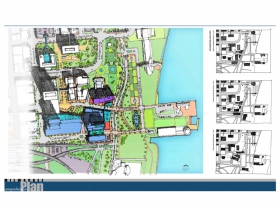 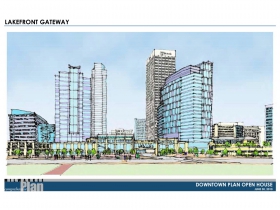 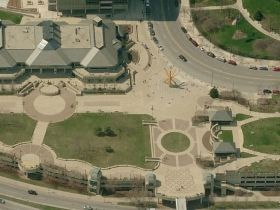 -Two different parks groups have broader concerns, arguing that the county should not be selling parkland and this is a slippery slope that can lead to more such deals. Lynch, who has long been a parks advocate, wrote a lengthy legal analysis of the proposed deal pointing out what he believes is a dearth of language protecting the public. He certainly seems to be right about the southern portion of the property.

-Am I the only one who finds it strange that the Lakefront Development Advisory Commission made no recommendation regarding the sale of O’Donnell Park? The commission has representatives of the city, county and state and its mission is to “Preserve and protect the scenic and natural beauty of the lakefront” and “Provide access throughout the lakefront and especially to the water’s edge by all Milwaukee County residents and visitors.” If this deal doesn’t relate to that mission, what does?

-Speaking of maximizing the lakefront as a community asset, there is a broader issue here I’ve previously addressed: how the O’Donnell parking garage has never belonged on the lakefront.

20 thoughts on “Murphy’s Law: Is O’Donnell Purchase a Sweetheart Deal?”