“Build your dream home in an established community.” The lot can be yours for just $79,000. 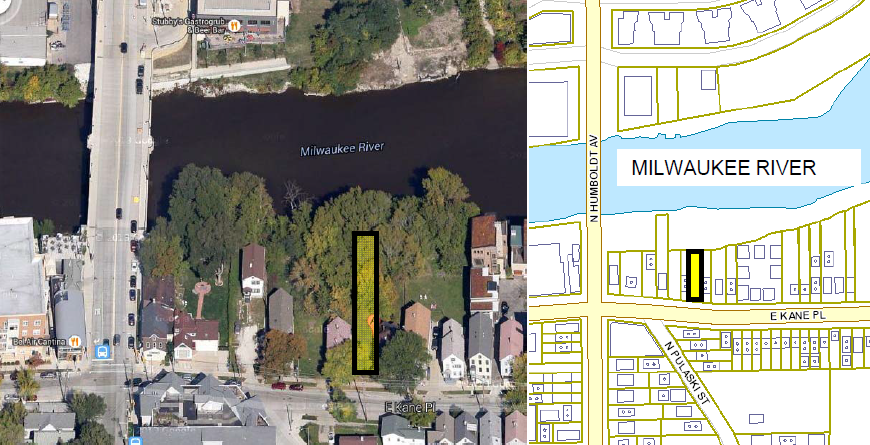 The last remaining, buildable, single-family, riverfront lot in Milwaukee can be yours for just $79,000. It is being offered by its owner — that would be the City of Milwaukee — which acquired the 25’ by 127’ vacant property, 1128 E. Kane Pl., in a tax deed foreclosure in 2008.

The lot is the most expensive of more than 400 city-owned, buildable, residential properties currently for sale throughout the city, with hundreds of them priced as low as $3,000. [See list of available building lots here.] The premium price for this lot is attributable to its location on the river.

It is one of six “Featured Home Building Sites” on the city’s real estate listing page, with the others being in Riverwest and Brewers Hill. “This is a great opportunity to build your dream home in an established community close to jobs, shopping, schools, parks, entertainment and public transit,” the listing proclaims.

The parcel has been a vacant eyesore as far back as anyone remembers. The city records have no information about the previous structures on the site, the foundations of which can still be seen today, and which will cost the future owner a fair amount of money to remove before construction begins.

Maps from 1894 and 1910 show two frame structures on the site, probably as inconsequentially constructed as the surviving neighboring buildings. At that time, and for nearly a century later,  the river was an open sewer, and the neighborhood was densely packed with mostly poor immigrant families. By the 1970s the immigrants had made way for junkies and radicals. If Brady Street, just to the south, was rainbow and psychedelic, Kane Place was dark, shadowy and forbidding.

Things are decidedly on the upswing these days.

You can look straight up crooked N. Pulaski St. from this lot, which is on one of the longest uninterrupted stretches of sidewalk in the city, running from N. Humboldt Ave. to E. North Ave., fully a half mile away. You can shop, drink and recreate all in the immediate vicinity. You can cross the river to the Greenway Gateway and have direct access to trails on either shore.

But what nobody’s been able to do over the past half-century or so is to build a home on this lot — and it’s not for want of trying.

In late 1981 the city offered the lot, which it had already acquired through a tax deed foreclosure, at auction. Steven C. Schultz, then a recent UW-Milwaukee architecture graduate, made the high bid of $1,100 for the property. “The property should be sold for twice that much,” a newspaper article quoted a city real estate official saying. The bid was denied.

But Schultz appealed, and appeared at a City Plan Commission hearing.

According to the article: “More was at stake than simply getting a good price, Schultz told the commissioners. The neighborhood along Kane Pl. is old and timeworn.

“By building a new home there, Schultz predicted, he might influence the neighbors to start making their own improvements. In addition, he said, he hoped his house could become a model.

“Its solar design with a sloping glass front should capture enough sunlight to completely heat the house, he said.

“The design intrigued commissioners, who voted 4-1 to overlook the smaller price tag and approve the sale because of Schiltz’ innovative plans.” 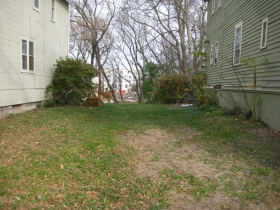 The next year, Schultz took his innovative plans to the Board of Zoning Appeals to ask for a variance to build a home there. In order to comply with ordinances prohibiting the parking of motor vehicles in a front yard, Schultz won a variance allowing him to have a 3 foot rear yard, rather than a 20 foot rear yard as required. This of course put the home much closer to the river, and also set it back far enough from the street so that any vehicles parked in front of the home would be to the rear of the adjacent homes, as stipulated in the variance.

With the sale to this private owner, the property is “BACK ON TAX rolls for ‘83,” an assessor noted in his files. But In November, the assessor looked for construction activity, and was disappointed. “Still a vac. lot. — New House not started.”

Facing a deadline to commence construction, Schultz took out a permit in January 1984. He did not fool the assessor one bit: “Dummy Permit. N/C Nothing Started. Still vac. lot. Write off dummy permit, wait for permit to be issued by B[uilding]. I[nspector’s]. Office.”

The assessor is still waiting for that permit, and for construction to get started.

The assessor presumably also notified the city that the lot was being used illegally for parking, because District Building Construction Inspector Orval Hummitzsch sent Schultz a violation letter shortly thereafter on February 15th, 1984.

“It was determined that the vacant lot is occupied by two inoperative, unlicensed motor vehicles — a boat and trailer and one operable station wagon. This is not a permitted use for this premises and you are hereby ordered to take action to have these vehicles removed. Your failure to maintain compliance with this order may subject you to prosecution,” Hummitzsch wrote.

By 1992 Schultz sold the property to Tyler G. Weggel for $15,000, and its slide into tax foreclosure began anew.

Weggel took out a permit in 1995, but this one no more impressed the assessor than did Schultz’s: “Still vacant lot, no evidence of new construction,” the exasperated bureaucrat recorded.

Weggel owned this and other properties, (including a duplex next door at 1126 E. Kane Pl., which sold in September 2014 for $100,000) and apparently bundled them into a single mortgage. He lost this and the others in a foreclosure suit brought by M&I Bank in 2008 (he still owes over $2,000 from the judgment), and the vacant lot reverted to the city in lieu of taxes which the bank apparently refused to pay during the mortgage meltdown.

This brings us to the present. Last week, Ald. Nik Kovac sent a letter to neighboring property owners and tenants telling them the lot was for sale, and that they might as well have first dibs on it.

The letter included a link to a real estate sheet outlining the property’s particulars: “This lot backs up to the Milwaukee River and is within an easy walk of the popular restaurants, shops and nightlife of Brady Street and the natural beauty of the Milwaukee River park corridor. This lot is available for single family, new home construction and owner occupancy.”

Due to the proximity of neighboring structures, any new construction must be fire-rated, and due to the narrow lot and lack of alley, the city will allow the first floor to have a garage opening facing the street. This is generally anathema to urban planners, but a good exception could be made for this property. You could get away with building a home with no garage at all, but it is not certain if our society has evolved to that point at this time..

Any house built on the site must be at least 20 feet tall (1.5 stories) but could go as high as 45 feet (3 stories). The design may be traditional or modern.

How to Bid On, Purchase & Build On a City-Owned Vacant Lot

The City’s “Building on a Vacant City of Milwaukee Lot” page on its website offers an eight-step procedure for bidders:

Fun Fact: The property at 1128 E. Kane Pl. is just downstream from Kane Commons, another development that was constructed, in part, on a former city-owned property that was offered to a neighboring owner. That became the basis of a failed federal lawsuit by Joseph Kaye, who claimed to be a developer. In 2004 Kaye had offered $500 more for the property than the successful bidder, Julilly Kohler, a developer with a lengthy track record in the Brady Street neighborhood, and owner of the property to the west, where I lived at the time.

Kaye then spread a fanciful story alleging corruption in City Hall and collusion between Kohler and Lincoln Fowler, who was then developing his Alterra Coffee store on former city property at 2999 N. Humboldt Blvd. At the time Kohler served on the Plan Commission and Fowler on the Redevelopment Authority, which had nothing to do with the Kane property or the Alterra parcel. A Federal Court thought nothing of Kaye’s argument. He appealed pro-se (even though Kaye was an attorney) and with the help of a court-appointed lawyer, submitted his case to the appeals court, which also found no merit in the case, ordering him to pay all costs of the litigation for the defendants.

One vacant street-side parcel in the Kane Commons project remains available [$76,000], while the other units, including three riverfront dwellings, two courtyard homes, an original duplex, an original triplex, and a new single family home on the street have been sold and occupied, and in some cases re-sold. 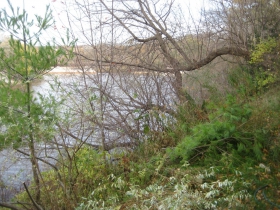 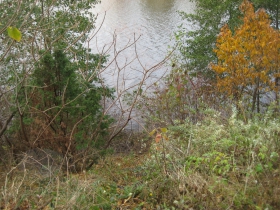 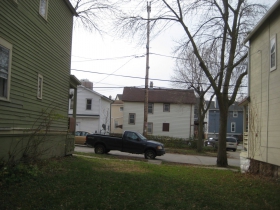 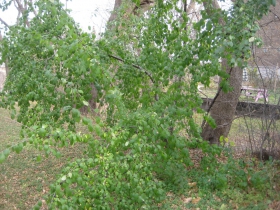 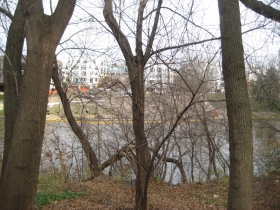