Paleontology of a Woman

Paleontology of a Woman, the latest show by Danceworks, was long on collaboration: it featured costumes and a fashion-oriented sensibility by Project Runway season 12 contestant Timothy Westbrook (who also contributes to Dial) and music by composer Allen Russell and the Tontine Ensemble. But while the teamwork involved was impressive and the scope of the piece ambitious, at times it felt like so many creative minds were at work the piece lost its flow.

It took me a few chapters to start accepting the vision from artistic director Dani Kuepper and company. I was stuck on the overt nature of the choreography and costuming – the dancers lurking around the stage like quasi cavemen in costumes that echoed dark creatures from some bygone epoch. I thought the performance was trying to do too much at times and lost sight of a central vision. In the first act alone, ideas bounced from dinosaurs to Eve’s Garden of Eden to the archaeopteryx (a prehistoric transitional creature between dinosaurs and birds) to the Victorian woman and back again. With a title like Paleontology of a Woman, you can include any subject matter since the dawn of time, and that can make it tough to whittle down.

The blitz of creativity did eventually find a synchronicity. Russell created an original composition played by a live quartet, with Russell manning the violin and a synthesizer to create a creepy, powerful soundscape that turned the Next Act Theatre studio into an otherworldly realm. The quartet was present and lit the entire time, welcoming you to shift your gaze to seek out the source of a particular surge or tremor in the music.

Westbrook, who pored over the Danceworks’ costume archive and repurposed the materials to create new looks for the company, was a crucial contributor. I would say that the dancers’ main look  – tight, patchwork, brown jumpsuits – looked a little clumsy compared to some of the other pieces that were featured throughout the night, including an intricate Victorian dress and archaeopteryx costume that was birdlike without being too obvious. But conceiving of and sewing from-scratch costumes for each company member is a very impressive undertaking.

Carrying the monumental undertaking was the choreography itself, which ranged from avant-garde runway to quirky soliloquy to full-company moments that required weaving and acrobatics and getting the timing just right. I loved the way the Danceworks company dancers (Melissa Anderson, Alberto Cambra, Kim Johnson, Dani Kuepper, Gina Laurenzi, Christal Wagner, Andrew Zanoni and Liz Zastrow) moved: they’re all wildly athletic, and managed to characterize that strength as masculine in one moment and feminine in the next.

Crucial to tying all of the evening’s ideas together was a runway segment, introducing each of the girls in beautifully crafted wedding gowns. It felt like the most straight-forward and exciting part of the evening – in other portions there may have been too much reaching, too much conceptual confusion. Here at least we could treat it simply as a fashion show, enjoying the score and the visual feast without trying to connect any dots.

I think Danceworks can suffer at times from chopping up its performances into short stories. This work had nine separate titles and sections, and that can become a way to ignore the need for a comprehensive flow. Creativity and collaborators aside, there needs to be that sense of a complete vision unfolding — even if crazily —  in front of you.

Paleontology of a Woman Gallery 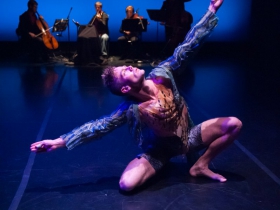 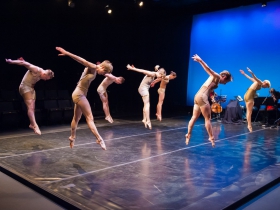 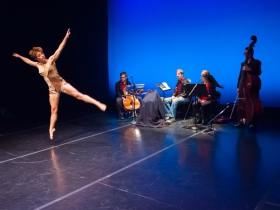