Most of last minute campaign donation may go to Gov. Walker, who made trip to Las Vegas to woo the casino magnate.

By Bill Lueders, Wisconsin Center for Investigative Journalism - Oct 27th, 2014 04:45 pm
Get a daily rundown of the top stories on Urban Milwaukee 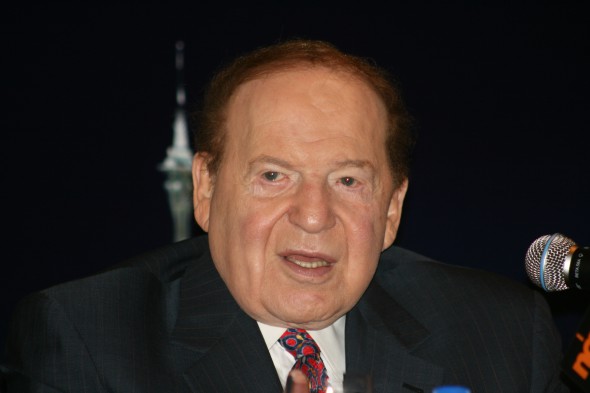 Las Vegas casino magnate Sheldon Adelson has waded into the state’s looming Nov. 4 election with a $650,000 contribution to the Republican Party of Wisconsin.

The contribution is listed as having been received Oct. 23. That puts it outside of the reporting window for campaign finance reports due Oct. 27, but the party reported it Sunday as a late contribution, as required.

On the same day as Adelson’s donation, Walker’s campaign reported receiving a $450,000 late contribution from the Wisconsin GOP.

Adelson, whose personal wealth has been estimated at more than $30 billion, has in recent years emerged as a major player in national elections. He reportedly contributed nearly $150 million to the 2012 elections, on behalf of Republican candidates. The Daily Beast has reported that he is poised to give as much as $100 million in the current elections.

Adelson’s six-figure contribution to the Wisconsin GOP was made possible by changes in state law wrought by recent court rulings.

“In the past, an individual’s contributions to PACs or parties was effectively limited to $10,000 because of the $10,000 aggregate limit in contributions in any one year,” said Reid Magney, spokesman for the state Government Accountability Board.

But a federal court ruling earlier this year struck down the aggregate limits for individual contributions. In response, the GAB in May said it would no longer enforce limits on how much individuals can give to parties and political action committees. Its website now states that these contributions are “unlimited.”

Magney said the law would allow a party or political action committee to “spend the money any way it sees fit,” although “the donor cannot designate who the money must go to.” The party can use the funds from Adelson to benefit a single candidate like Republican Gov. Scott Walker, to whom individual contribution limits still apply.

“We’ve seen sensible limits on campaign contributions thrown out the door,” said Mike McCabe of the Wisconsin Democracy Campaign, a nonpartisan elections watchdog. “So now you have billionaires who can throw around previously unimaginable sums to influence campaigns.”

In March, Walker traveled to Las Vegas, along with other potential presidential contenders, to speak at the Republican Jewish Coalition’s annual spring leadership meeting. The appearances were largely seen as an attempt to woo Adelson’s support. Adelson was not present for Walker’s speech, in which he criticized the Obama administration’s foreign policy.

Adelson has given money to Walker before, according to the GAB. In 2012, when normal limits were suspended under changed rules for recall elections, he gave $250,000 to Walker’s campaign. Earlier this year, with the limits again in place, he gave Walker a maximum contribution of $10,000.

Officials at the Republican Party of Wisconsin did not immediately immediately respond to requests for comment.