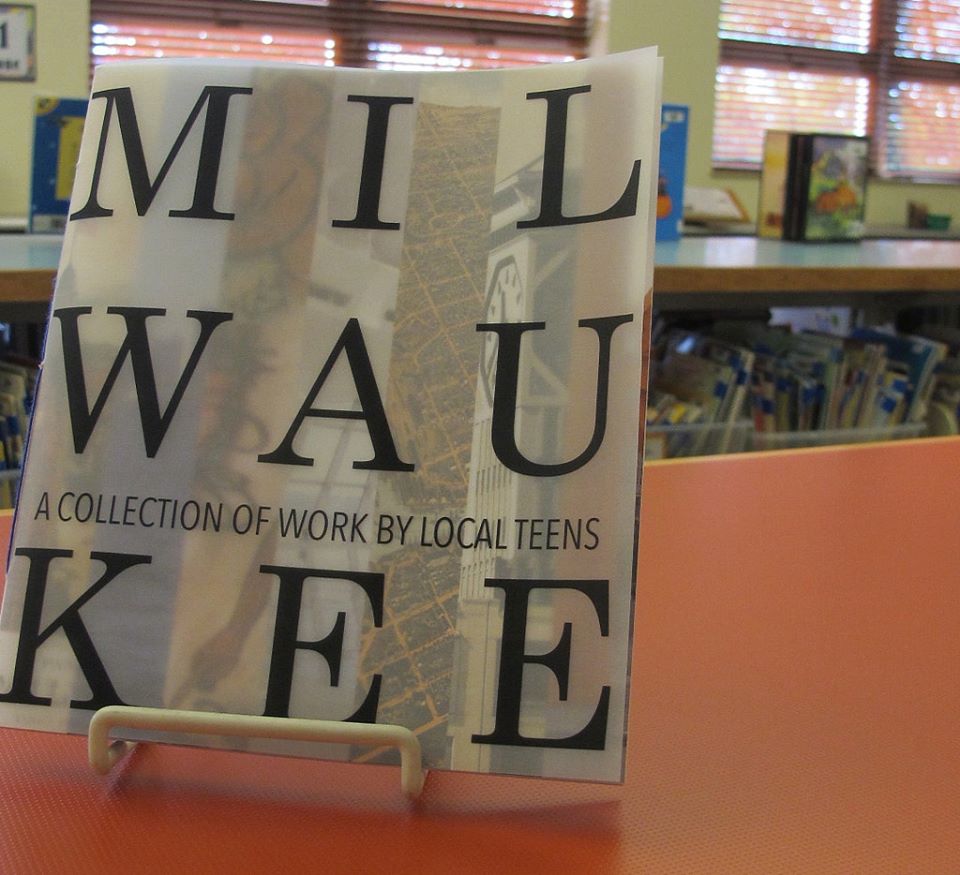 Jack Hietpas is making 100 books by hand to be sold at Woodland Pattern Book Center in Riverwest and online at Hidden Color Press. (Photo by Caroline Roers)

Jack Hietpas is the editor, book designer and publisher of a handcrafted book titled “Milwaukee: A Collection of Work by Local Teens.”

Hietpas is in eighth grade.

“I wanted to show a connection between different writers and artists throughout Milwaukee who are close in age and geographical area but who are very different in their perspectives and their perception of how they experience the city,” Hietpas said.

A student at St. Robert School in Shorewood, Hietpas started writing and publishing his first book when he was in seventh grade. His English teacher, Marisa Riepenhoff, suggested that he complete the project as an alternative assignment for English class after realizing his affinity for art and design. 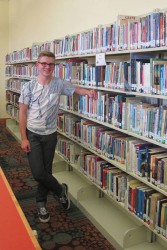 It has taken Jack Hietpas about a year to edit, design and publish his first book. (Photo by Caroline Roers)

“[When] I first presented Jack with the project I told him he could do anything he wanted. He is a great writer so he could write a book and publish it himself,” Riepenhoff said. Hietpas chose to create an anthology of poetry, stories and art submitted by local teens.

Riepenhoff was Hietpas’s initial advisor for the project. He later worked with a team of advisors including artists Dasha Kelly and Sarah Gail Luther, Joe Riepenhoff, editor of Green Gallery Press, and Robert J. Baumann, editor at the Woodland Pattern Book Center. Hietpas worked with his advisors to choose the finalists and edit their work.

Baumann gave Hietpas tips about using desktop publishing software, and discussed typography. He also taught him about the role of an editor. “I just tried to make sure that Jack was seeing all the issues and asking all the right questions,” said Baumann. “Honestly, I’m not sure that I taught Jack very much at all—but I know that he taught me a lot.”

Marisa Riepenhoff said that when Hietpas was in seventh grade he used typesetting terms, such as “kerning,” in conversations. “I don’t even know what kerning is, but I guess it was something he had to learn,” she said.

“It is the space between the letters,” he explained with a smile.

Hietpas is now making 100 books under the name of Hidden Color Press. Each book is constructed by hand. He creates holes in the binding with an awl his dad rigged up to make them consistent, and then sews it with a needle and thread.

With all the different steps it took to create the book, Jack said that the design element of the project was his favorite.

“When I assigned this idea to him I didn’t know what he would like the best because he is a great writer, a great artist and loves design and is really good with people,” Riepenhoff said.

Hietpas said he learned a different perspective as a result of the project, and that it has helped him be more “aware and accepting.” Baumann agreed. “Jack’s level of cultural awareness and his ability to make connections between disparate ideas inspire me.”

The story that most affected Hietpas is a piece called “Untitled” by Demontre Harvey, a 16-year-old who attends James E Groppi High School, 1312 N. 27th St. Harvey’s poem (see below) is about rising up against the drugs, killing and sex that surrounds him in his neighborhood.

“It is about a lot of stuff that was happening in my life,” Harvey said. “I am just hoping the story will relate to someone else’s life.”

“Milwaukee: A Collection of Work by Local Teens” will be sold for $6.50 at Woodland Pattern Book Center in Riverwest and online at Hidden Color Press.

from Center Street to Burleigh,
from Hamilton to Galena,
from da Southside to da Eastside,
every night it’s going down in Mil-town,
dem young bucks on Congress bang—
what y’all old folks called slungin’ man.
I think something ‘bout to pop off.
dang, another homie died tonight.
there are only three ways you can make it to Milwaukee,
I can see you on my big screen seeing that you made it or
I can see yo’ face on a shirt saying “R.I.P. In Loving Memory” or
See yo’ name on Facebook saying “FREE Little Bro.”
dey gave him five years, he still got three more.

this the life that everyone want, right?
want to be something?
dey not tapping up and down the same ol’ blocks.
got yo’ first gun, now you want to go rob a man?
this is Milwaukee.
“Hustle City”.
you can make money any type of way,
why you got to rob and kill someone for everything dey got, man?
I remember when I used to see nothin’ but love.
now I see nothin’ but blood, thugs, guerillas, and killers.
everybody want to be a hitter.

walk down Ring seeing females sell themselves.
ride down Locust see the males selling drugs.
but dey saying it’s all good.
we put ourselves on the map, but not in a good way.
we came from civil to savage trying to make it from rags to riches.
it seem like if you live on Silver Spring,
you not making it out Milwaukee unless you working in the kitchen.

everybody think you got to kill somebody, sell something.
you got to live that way?
naw, be a leader,
not a follower.
be a go getta, not a quitter.
be a man, not a hitter.
stop doing stupid stuff so you won’t have to watch yo’ back.
sleep with a nine-millow under yo’ pillow
or having the police wondering where you at.
what’s wrong wit’ bein’ a college person?
family person?
or just doing things the right way?
but you can’t change everyone,
everyone can’t change water into wine.

hey, we got some good parts to us.
a lot of us help out the youth or take care of our family.

don’t everybody got to be a follower,
so I’m gonna be a leader.
hope you follow me
‘cause I’m gonna take you to the light where it shines.

2 thoughts on “How Teens View Milwaukee”